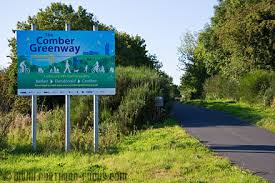 DETECTIVES are appealing for witnesses and information after a male was the victim of a punishment-style assault on Tuesday night.

At approximately 6.30pm police received a report that a 23-year-old man had been assaulted on the Comber Greenway in the Knock area of East Belfast by a group of approximately six or seven men, who had hammers, bats and knuckledusters.

The victim was taken to hospital for treatment to his injuries, which are not believed to be life-threatening at this time.

“I unreservedly condemn the shocking incident which took place tonight in which a gang of up to seven men attacked a man in his early 20s in a paramilitary-style attack, using bats, hammers and knuckledusters, and as a result of the attack the victim is being treated in hospital for his injuries.

“The Comber Greenway is used by many people to walk dogs, ride bicycles and simply enjoy the peace and quiet. It is the last place where one would expect to see a brutal gang attack on a young man.

“Nobody has the right to take the law into their own hands and nobody in East Belfast wants this type of activity to be taking place. There is simply no excuse whatsoever for it and the people responsible need to be taken off the streets and brought before the courts. I urge anyone who can assist the police to catch the culprits to come forward immediately and tell what they know.”

Detective Sergeant Sam McCallum appealed to anyone who may have witnessed this assault or anyone who has information that could assist with police enquiries to contact Detectives at Musgrave on the non-emergency number 101, quoting reference 1161 12/06/18.

Alternatively, information can also be provided to the independent charity Crimestoppers on 0800 555 111, which is 100% anonymous and gives people the power to speak up and stop crime.