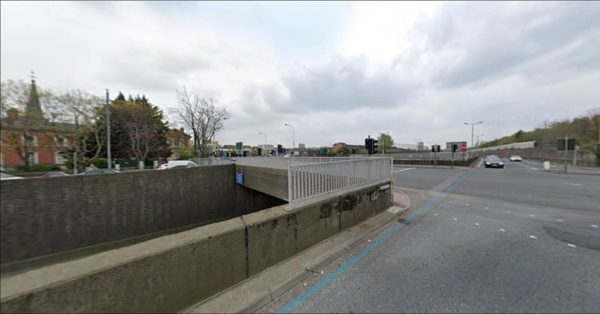 NO CHANGE: The bridge over the Westlink at Clifton Street

INFRASTRUCTURE Minister Nichola Mallon says she has no plans to raise the height of railings at three bridges in North Belfast notorious for suicide attempts.
The Minister was responding to an Assembly question from North Belfast Sinn Féin MLA Carál Ní Chuilín on whether her Department has plans to raise the railings on Arthur Bridge, Hightown Bridge and Clifton Street Bridge following recent suicide attempts.
In response to the query, Minister Mallon said: “Mental health and well-being are extremely important to me, both personally and as Minister, and to my Department.
“I will be working closely with Executive colleagues, local communities, experts, stakeholders and frontline staff to ensure that my Department contributes fully to this agenda.
“My Department is currently working in partnership with stakeholders to consider positive actions that we can take to reduce the number of suicide attempts associated with our transport network, and bridges in particular.
“Where appropriate, and where supported by expert opinion, this may include changes to bridge infrastructure.
“There are currently no plans to raise the railings on the bridges you have mentioned, however I will now be looking at all options to explore what is needed and possible to help with suicide prevention.
“Whilst I recognise that engineering solutions may provide part of the answer, in isolation they may not address the underlying problem and according to experts may have the potential to reinforce the association of bridges with suicide attempts and further stigmatise the area without necessarily reducing the number of attempts.
“I believe a more innovative and collaborative approach is required and I plan to actively engage with experts and stakeholders in the coming weeks.”
Ms Ní Chuilín said she was “shocked and disappointed” at the Minister’s response and called for her to reconsider her position on the bridges.
“I was shocked and disappointed by her response that she has no plans to raise the railings on these bridges, despite the recent high rates of suicides and attempts by people to die by suicide in the area.
“Sinn Féin has previously met with the Department of Infrastructure, the Public Health Agency, the Belfast Trust and the PSNI in October to discuss railings at these and other bridges.
“All Departments and statutory bodies have a duty to explore every option to improve suicide prevention measures and I hope the Minister will reconsider this position.”