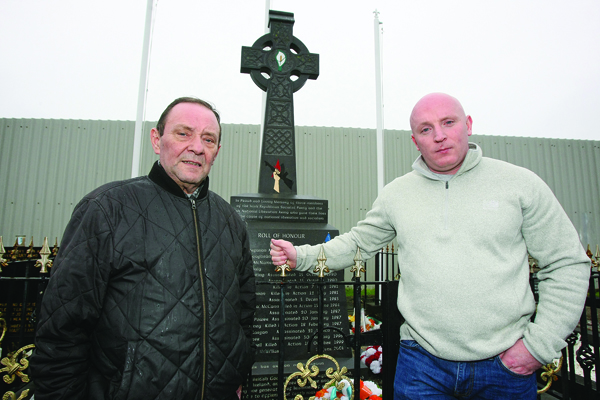 IN what is believed to be the first case of its kind, a Belfast court has found a man guilty of carrying a flag during an Easter Sunday parade on the Falls Road.

Last Friday, West Belfast man Sean Carlin appeared in Laganside court and was sentenced under the ‘Terrorism Act 2000’ and in particular with carrying an article, in such a way or in such circumstances as to arouse reasonable suspicion that he is a member or supporter of a proscribed organisation, charges he intends to appeal.

In 2017 during a traditional Easter Sunday commemoration on the Falls Road, a historical replica flag, based on a flag used by the Belfast Brigade of the Irish National Liberation Army during the 1980s, was unfurled by IRSP member Sean who then carried it during the party’s procession to Milltown cemetery.

The parade in question had been themed to honour in particular members of the Belfast Brigade INLA who had lost their lives when the IRSP came under attack after a split in the organisation in 1987.

While the replica Belfast Brigade INLA flag was clearly being carried in recognition of the sacrifice made by fallen members of that organisation, it was revealed in court that undercover police had observed Sean Carlin and earmarked him for arrest. He was later arrested from his home.

Speaking to the Andersonstown News Sean said: “Around six months after that particular parade I was arrested, I later received a summons to say I was being charged.

“I was up in court maybe three times before it went to contest. There were three cops who gave evidence against me, two undercover cops said they observed me on the day.

“We never questioned their evidence, we didn’t say it wasn’t me, we were arguing the context in which the flag was being carried, but they had a different view.”

“How do I know if I’m breaking that suspended sentence. I mean if I wear a badge or if I go to a parade am I breaking my sentence, it’s so vague and completely open for interpretation.”

A spokesperson for the IRSP said: “Every Easter in Belfast, tens of thousands of Irish republicans and socialists from all organisations march in Belfast’s Falls Road towards Milltown cemetery to attend the graves of Ireland’s patriot dead, many carrying the flags of military organisations who took part in the various campaigns against British rule in Ireland over the years.

“The IRSP are supporting Sean Carlin’s appeal against this blatantly targeted oppression of a republican socialist and the potential all out criminalisation of Ireland’s right to commemorate its patriot dead.