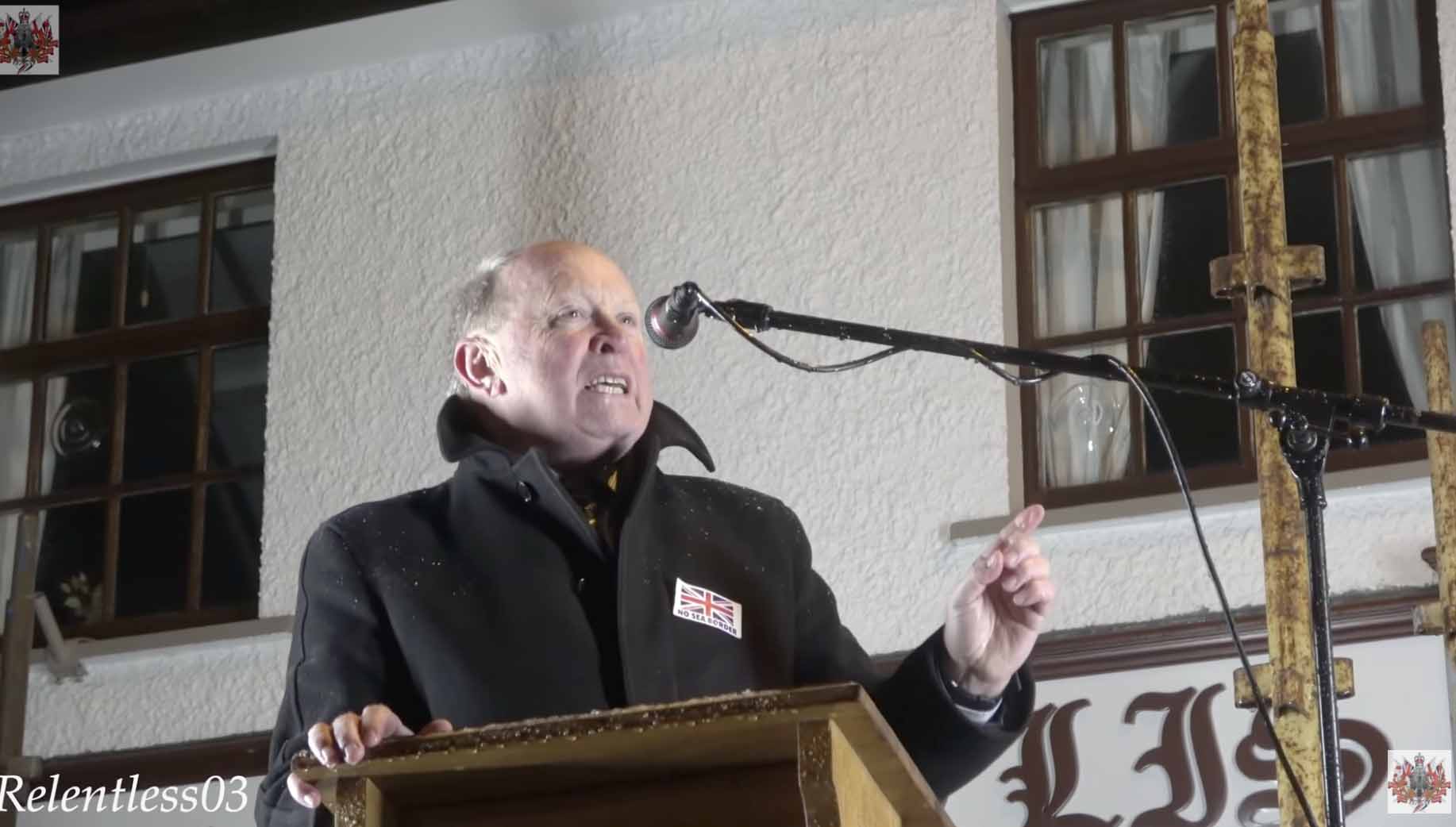 TO THE RESCUE: Jim Allister had to come to the aid of Sammy Wilson when the crowd turned on him

YOU probably saw that video clip last week on the internet, of the ‘Randalstown-South Londonderry’ wans against the Protocol.  There they were, a substantial body of men, union flags flying, trudging heads-down against some brutal wind and snow.

There was something magnificent about them – they reminded me of history accounts I read years ago of Napoleon’s army in 1812, pushing ever deeper into a Russian winter. On they went, every step growing weaker as the icy cold bit into them and eventually swallowed them.  In what must be the under-statement of the year, someone on Twitter commented on the Randalstown-South Londonderry lot: “There must be better ways of spending a Friday night.”

Meanwhile, in Markethill, Sammy Wilson was at the microphone telling the assembled crowd how the EU was trying to annex our gallant little NEI, just like Vladimir Putin had annexed the Crimea.  But just as he raised his arm and opened his mouth, the boos began. “Traitor!” his audience shouted. “Boooo!”

Sammy tried to calm them by telling them that he had unashamedly voted for Brexit, but that only made them madder. Likewise his warning that the “unionist-hating BBC” was recording this tonight and would be delighted to broadcast unionist division. “Lundy! Traitor!”

TUV leader Jim Allister had to intervene during DUP MP Sammy Wilson’s speech at an anti-protocol rally after the crowd booed and jeered him. Jim Allister urged the crowd to listen to him but said to make their anger known on Election Day. pic.twitter.com/6RjK5y2Qg2

In the end Jim Allister had to rescue Sammy. That’s Jim Allister who earlier had accused the DUP of softening their line on the Protocol. But never mind that. It was a golden opportunity for Jim to patronise Sammy and to get the audience back onside.

Divided unionism may seem, but will they somehow find a way to destroy the Protocol? Let’s see what past efforts produced...

Hands up if you remember the ‘Ulster Says No’ campaign. Right. Despite Ian Paisley’s fiery “Never, Never, never, never!” to an adoring crowd of 150,000,  unionism still had to suck up the Anglo-Irish Agreement. Then there was the flags protest at Belfast City Hall – who could forget  the wee woman who put her mouth to a hole in the glass and shrieked “No surrender!”

Whom the gods wish to destroy, we’re told, they first make mad. The hardy bucks trudging through last week’s snow looked like people on the road to nowhere. Which in political terms amounts to madness.

But the new rule about flags flying over City Hall  stayed in place. And of course there was the Garvaghy Road, which Orangemen vowed to walk down. Ah, me. Again and again unionism has talked the talk and roared its defiance, but never quite managed to walk the walk and emerge in triumph. And that was united unionism; today we have the partiy in public disarray. As the DUP rush to the part of the dyke that’s leaking votes to the TUV,  it must simultaneously rush to the part leaking votes to the UUP and the Alliance Party. Because the May elections are getting frighteningly close.

To be successful in any field, the psychologists tell us, you must imagine yourself overcoming all difficulties. You’ll see it with athletes like high-jumpers – they’re clearly hard-wiring success into their heads before making their jump. Likewise with  a political contest, you have to see yourself winning before you can win.

And that is going to be a very, very hard ask for unionism this time round. Yes, they all want the Protocol abolished, but they all want to be elected as well. Imagining success even as you’re being torn apart becomes an unbearable challenge. No wonder they’ve taken to biting lumps out of each other. Whom the gods wish to destroy, we’re told, they first make mad. The hardy bucks trudging through last week’s snow looked like people on the road to nowhere. Which in political terms amounts to madness.

Finally, how’s your Tchaikovsky?  Because I’d like to suggest you locate and download the Russian composer’s 1812 Overture. It’s actually kind of wonderful, the way the music  at first reflects Napoleon’s mighty  army heading proudly east,  only to be devoured by Russia’s mightiest weapon, its winter. And if you have a unionist friend, maybe send them a link to it. If music can soothe the savage breast, it may also calm those driven mad.