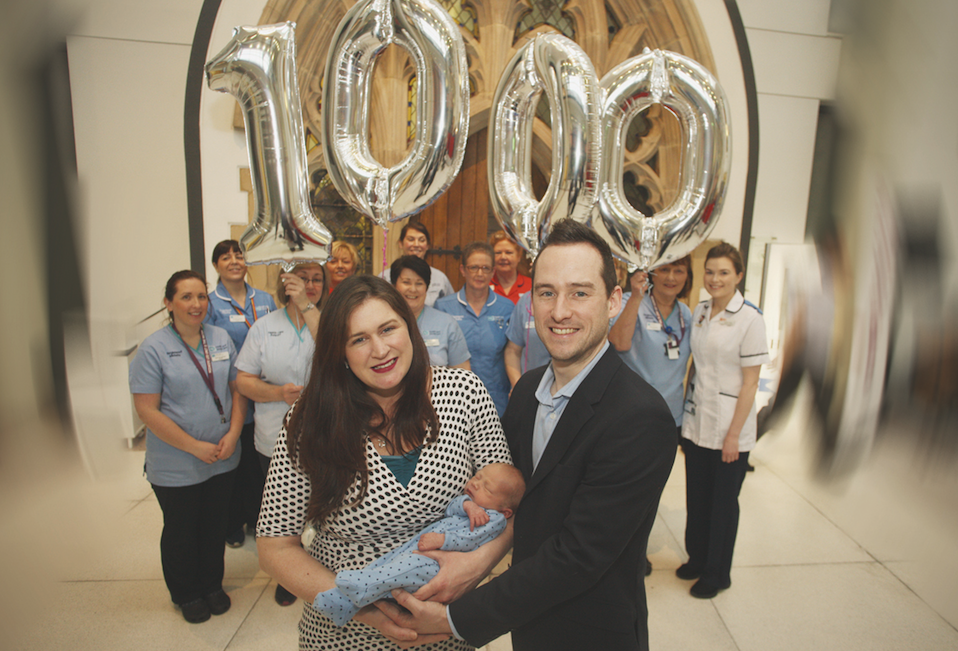 LANDMARK: Parents Christine and Jonathan McGrandle with baby Spencer, who became the 1,000th birth at the Midwifery Led Unit at the Mater Hospital

STAFF at the Mater Hospital Midwifery Led Unit are celebrating after they helped deliver their 1,000th birth.
Proud parents Christine and Jonathan McGrandle gave birth to their beautiful son, Spencer at 10.07am on January 3, becoming the 1,000th baby delivered in the unit. A special event was held at the Mater Hospital on Monday afternoon with baby Spencer and his parents joined by midwives, doctors and Mater Hospital staff to mark the milestone.
“We were over the moon to learn that Spencer was the 1,000th baby delivered by midwives in the unit,” explained Jonathan. “It is almost hard to put it into words. We didn’t know anything about it until after the birth.
“It is nice that we were able to give something back to this wonderful unit who helped us so much in the transition of bringing Spencer into the world. We can’t thank everyone enough.”
Sister Jasmine Callow said the milestone was a celebration for all involved over the years with the Midwifery Led Unit.
“This is an opportunity to celebrate the onward success of the Midwifery Led Unit which has now been open for four years,” she said. “It’s an opportunity to thank everyone who has contributed to the success of the unit and acknowledge the hard work of all. The unit is unique because it is small. The staff have more time to spend with mothers to support them through this natural process in life.
“The unit provides beautiful birth suites with pools that many mothers use for giving birth. Family and friends can visit at anytime. There are no restrictions because we want mothers to feel as much at home as possible.
“We want mothers to know that this unit at the Mater is a wonderful place to give birth.”
The unit first opened its doors at the end of April 2013, boasting state-of-the-art birthing suites with birthing pools, flat screen TVs, iPod docking stations and ensuite bathrooms. Women and their families have access to their own kitchen and partners are encouraged to stay to provide support. Midwives promote natural childbirth and encourage mums to remain as active as possible during their labours.