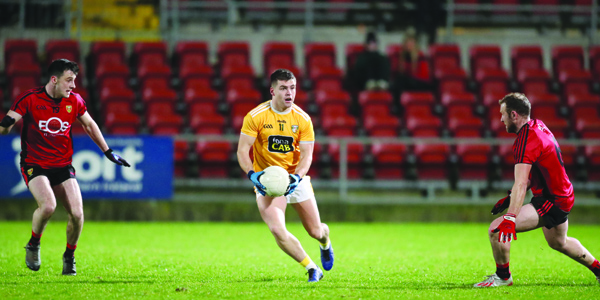 Paddy McBride, pictured in action against Down in the Dr McKenna Cup earlier this month, feels Antrim are well-placed to challenge for promotion from Division Four ahead of Sunday’s opening game against Wexford in Glenavy

ANTRIM bid to lay down a marker for the 2020 season when they host Wexford in their Division Four opener at Glenavy on Sunday.

The Saffrons have finished third in the last two seasons – narrowly failing to gain promotion from the basement tier.

Three defeats in their first three games, including against Wexford, cost them all hope in 2019 before they rallied with three wins from their final four games.

In a frustrating campaign, Lenny Harbinson’s men suffered a hat-trick of one-point defeats to Derry, Leitrim and Waterford. Despite that, the bookies have installed Antrim as the 5/2 joint-favourites along with Carlow for the Division Four title.

Antrim star Paddy McBride feels the Saffrons have as good a chance as any in the promotion race and is confident they can make a positive start on Sunday.

“I think it is always the case that either you win or you learn and we did a whole lot of learning last year,” stated McBride.

“I think a lot of it comes down to confidence as well. Once you get over the line in a tight game, the next time it becomes easier. We still have to work on covering the basics too – tightening up our defence, forward play and finishing.

“We might have lost a few key players, but we’ve actually better strength-in-depth in the panel this year.

“In terms of improving, even having a good squad and a good atmosphere about the place can help.

“We can see things starting to come together in training and I feel we are ready to hit the ground running against Wexford.”

Antrim’s attack for the 2020 campaign has been blunted by the departures of both Matthew Fitzpatrick and Ryan Murray for this season while Stephen Beatty, Padraig Nugent and Paddy McCormick are also unavailable.

While Antrim are without five first-team regulars this season, they are boosted by the return of several former panellists.

Naomh Éanna duo Peter Healy and Eoin Nagle return to the county set-up while experienced campaigners Paddy Cunningham and Tomás McCann are back having impressed during the club season for Lámh Dhearg and Cargin respectively.

“We can talk about ‘Fitzy’ being away or Ryan Murray being away or whatever, but we have to concentrate on who is there,” added McBride.

“We need to focus on how we win with the players who we do have.

“The likes of Peter Healy and Eoin Nagle are two brilliant player to have back. They weren’t able to commit last year, but they are two great additions to the panel this year and you have Paddy (Cunningham) and Tomás McCann back playing. You can’t beat experience and to have those boys back is a huge positive.

“We’ve a really good blend of youth and experience and everything is very positive at the minute.”

McBride, like Harbinson, stressed that he has paid little attention to reports of disharmony coming from Paul Galvin’s Wexford camp.

Selector Mattie Ford stepped away before Christmas, while last year’s captain Michael Furlong quit the panel and has linked up with Davy Fitzgerald’s hurlers instead. Kevin O’Grady is understood to have quit in solidarity with Furlong and will also ply his trade with the hurlers this season. Wexford also suffered three defeats from three in the O’Byrne Cup to Westmeath, Laois and Offaly.

Harbinson must decide who to play in goal for Sunday’s league opener with Oisin Kerr (Creggan), Andrew Hasson (Rasharkin) and Michael Byrne (Rossa) all vying for the number one jersey following Padraig Nugent’s departure.

In defence, Meath native Mark Gardner looks set to challenge for a defensive slot while Ronan Delargy had a solid campaign with Portglenone.

Ricky Johnston suffered a knee injury against Down and may not be risked with Paddy Gallagher likely to be drafted into the full-back line.

Aghagallon’s Ruairi McCann could find himself as Antrim’s target man if they seek to make advantage of the new offence mark ruling while his clubmate Adam Loughran caught the eye off the bench against the Mournemen.

Having opted out of county football last year, Creggan’s Conor Small is also back in the fold, but Cargin ace Tomás McCann is ruled out after he underwent groin surgery before Christmas and he is likely to miss the first few rounds of the league.

Lámh Dhearg’s Marc Jordan could also come in for his league debut having impressed for the Red Hands this season while Odhran Eastwood (Naomh Éanna) is available once again after Queen’s exited the Sigerson Cup last weekend.

When the fixtures were made, this had the potential to be Antrim’s toughest test in the league. They won’t take anything for granted following last year’s series of narrow defeats, but they’ve showed enough promise in pre-season to suggest they can overcome a Wexford side seemingly in disarray.