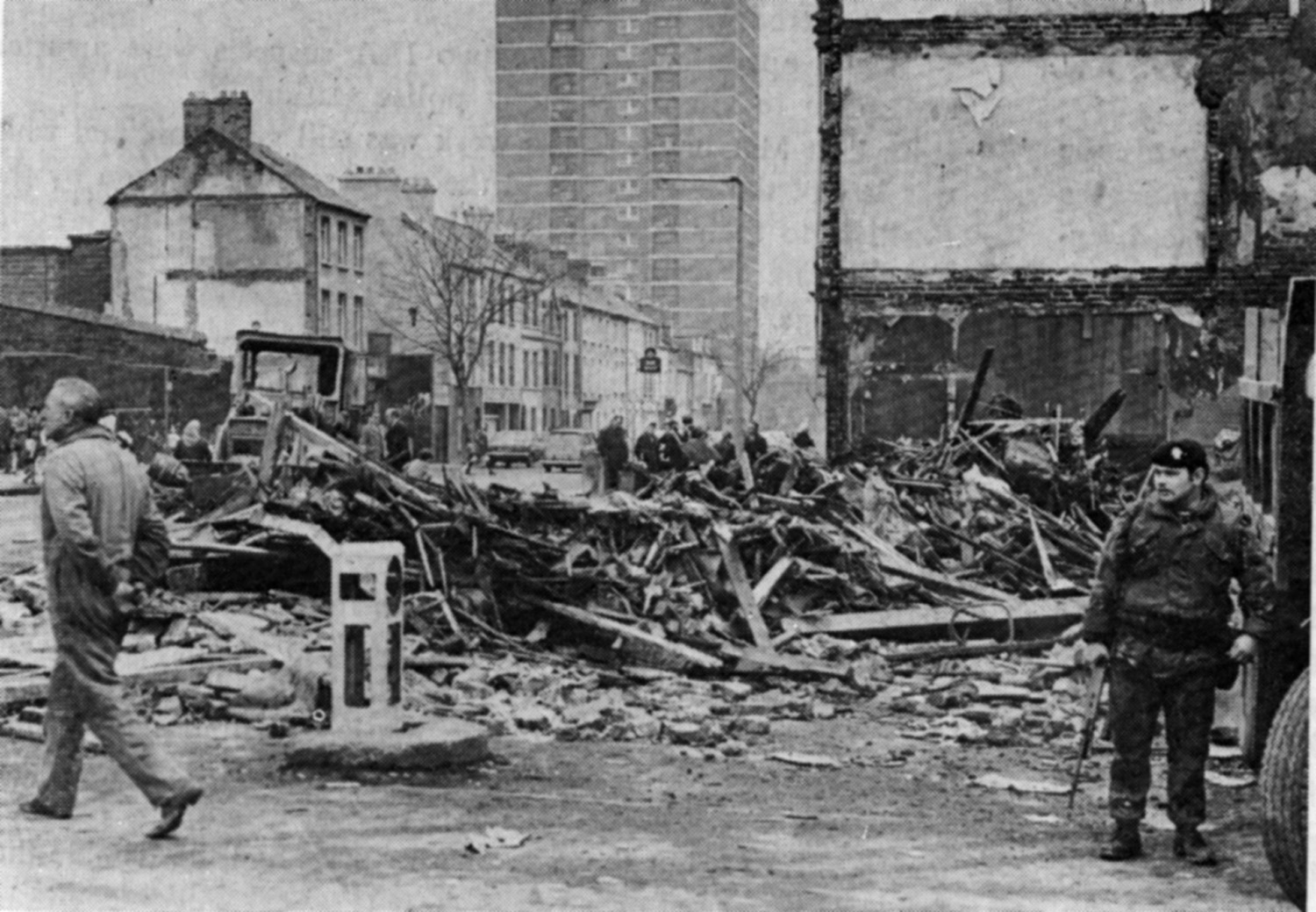 15 people, including two children were killed in the North Queen Street bar massacre on December 4 1971.

THE bar that the UVF had intended to blow up before switching their sights to McGurk’s had been raided two nights earlier by the British army and patrons arrested and screened.
Fifteen civilians, including two children, were killed in the North Queen Street bar massacre on December 4 1971.
Ciarán MacAirt, a grandson of two of the victims, unearthed the information in secret military documents in the National Archives in London. This week marks the 47th anniversary of the atrocity.
At 10pm on December 2, 1971 – two days before the McGurk’s attack, British soldiers of the 2nd Battalion Royal Regiment Fusiliers (2 RRF) raided and searched the Gem Bar close to McGurk’s Bar on North Queen Street.
Less than 48 hours later, loyalist paramilitaries of the Ulster Volunteer Force (UVF) targeted the Gem Bar for a major bomb attack. The Gem Bar was suspected by the British Army of being frequented by members of the Official IRA.
The one convicted bomber, Robert James Campbell, confessed that the UVF gang drove to the area to attack the Gem Bar.
It is believed that they could not plant the bomb there as young men were outside the bar so the bombers drove around the corner and pulled up beside the side entrance of McGurk’s Bar instead. One of the bombers got out of the car and placed the bomb in the entranceway, lit the fuse and ran back to the car which then sped off down Great George’s Street.
Ciarán MacAirt said: “It is horrific to contemplate that the British Army believed that the Gem Bar was frequented by members and supporters of the Official IRA and had raided the bar, searched it and screened its customers before lifting a half dozen men. The action resulting from these lifts is redacted in the files. Then, two nights later, pro-state loyalist extremists targeted the Gem Bar but failed to get clear access so made the fateful decision to attack the soft target of McGurk’s Bar instead.
“We also know from these files, contrary to what the police and Office of the Police Ombudsman reported to our families, the British Army within an hour (at 9:28pm) had linked the Gem Bar to the bomb attack as the files record that McGurk’s Bar “was close to the Gem Bar” – but the British Army’s description of the Gem Bar is withheld from the families even after 47 years after the atrocity.
“I believe the redacted information records that the Gem Bar was a ‘Goulding’ bar which in British military parlance denoted its alleged affiliation to the Official IRA whose leader at the time was Cathal Goulding. The reason that it is redacted could be that it shows that the British Army had correctly considered the Gem Bar to have been the target and the bombers loyalists. This alone would undermine the botched investigations our families have endured until now.
“We also know from the same file that a British Army bomb expert had reported that the seat of the explosion was clearly in the entranceway and not inside the bar as the police had lied to the public, so the bar was attacked as witnesses had testified. Finally, from this significant new discovery, we now know for a fact that the British Army’s covert death-squad, the Military Reaction Force, was operating in the area with 2 RRF who had raided the Gem Bar and we had long suspected that it had facilitated and directed the bombers.”
Niall Ó Murchú of Kinnear and Co. Solicitors is legal representative for many of the McGurk’s Bar families. He added: “With every piece of new evidence which a family member had to find, it is becoming increasingly clear that the British army was involved in the planning and targeting of this bomb attack.
“To allay all suspicion, we challenge Chief Constable George Hamilton and Police Ombudsman Michael Maguire to retrieve this file and release the information that the British Ministry of Defence is withholding from the families 47 years later.”