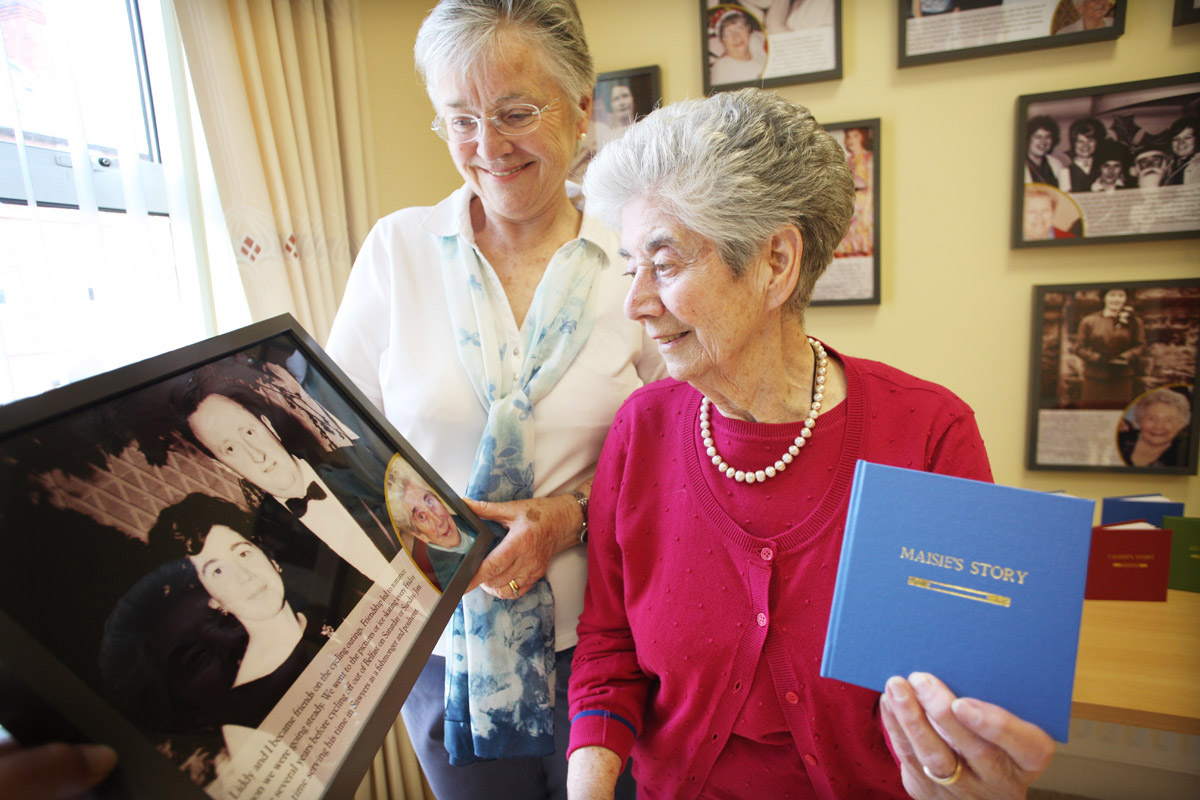 Putting in rollers for the evening dances during tea break at Gallagher’s tobacco factory, forking out £6 for a wedding cake and dreading an order of parachute silk as an apprentice in the Rosebank Weaving Company are just some of the memories recorded by members of Newington Day Centre as part of a unique life story project.
Ten older members of Newington Day Centre, ranging in age from 72 to 89, celebrated their life achievements by having their storybooks printed and exhibited in front of friends, family and volunteers who had helped on the project.
The warm dose of nostalgia brought to light tales including an award-winning poet, a pensioner who returned to Ireland from life in America on the QE2 and the woman who brought credit unions to Ireland.
Newington Day Centre, funded through the Big Lottery ‘Reaching Out to Plder People’ project and facilitated by Reminiscence Network NI, paired up ten of its members with ten volunteers from Holy Family parish to write and record their life story over a period of eight weeks.
The centre, which has operated in North Belfast for over 30 years, provides care to people who are older and at times vulnerable.
Louise Purdy, project manager, explained how the project values people and their stories, especially when a volunteer is assisting an older person to offer one-to-one time where they feel valued.
Maisie Liddy (86) said: “I started work right away as an apprentice in the Rosebank Weaving Company. The starting pay was 17 and sixpence a week and we were paid by the amount of finished cloth we produced. Parachute silk was the least popular with the girls as the yarn was very fine and it took a long time to produce ‘an end’.”
Nuala Prince, who volunteered her time to help with the project, said: “I had been telling my family and friends about how excited I was to be taking part in the project which I found to be extremely heart warming.
“As the weeks went by you could see the people taking part come to life a little bit more, becoming more alert and finding an enthusiasm for taking part. The project filled me with a respect for our older people but it also offered them a sense of their own worth.”
Catherine Anderson (84) who took part in the project said that she had got great joy out of bringing back memories she had forgotten.
“I have really enjoyed telling my story to Geraldine,” she said. “It was lovely that someone was interested in me and wanted to listen. I felt like I was with my David and my children again as I stepped back in time. Through my family photos it brought back many happy memories.”
Following the success of the life-story project it is now hoped that the scheme could be rolled out to involve a wider group of users in the centre.
Margaret Mc Crudden, day centre manager, said: “People come to a day centre to continue with their life and it is amazing to see people close on 90 participating in these type of activities. The one-to-one aspect also meant that people with sight or hearing problems found it easier to participate.”