MI5 in driving seat and not the police, says woman whose house was raided 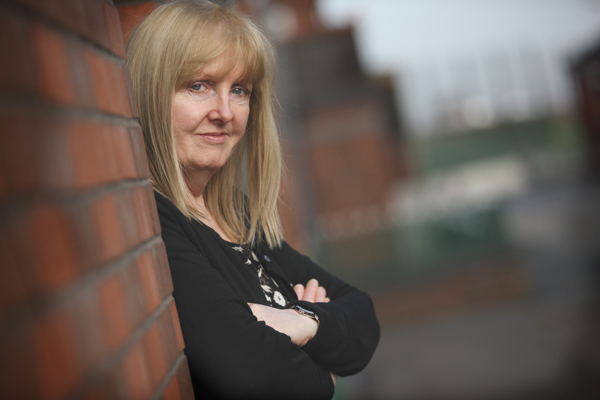 A WEST BELFAST woman has hit out at the PSNI after they spent five and half hours raiding her home and confiscated expensive electrical equipment that they are yet to return.
Lifelong republican and Saoradh member Nuala Perry’s Waterville Street home was searched over a five-and-a-half-hour period.
Speaking to the Andersonstown News Nuala said: “Just because you don’t follow the crowd or you have a different set of political beliefs you’re criminalised and seen as a problem.”
Among the items taken from Nuala’s home were three contract mobile phones, two laptops, an iPad, a tablet and a computer.
Nuala continued: “I have had the mobiles returned to me, but only because I basically hounded them, there was no way I was paying phone bills for three phones that were lying in storage somewhere for God knows how long.”
Discussing the raid she said: “They arrived here on the 20th of February at 8.45pm and left at 2.15am on the 21st, they came in the back and front doors simultaneously, they had bolt cutters and they removed locks, they searched everywhere, they took apart the very plugs in the house. They said they were there under the Terrorist Act 2000, warranty enter and search.
“The female detective told me they were looking for certain items like documents, photographs, maps, computers, mobile phones or republican paraphernalia or articles that could be used by terrorists.
“I asked her what brought her to my home and she said ‘What brought us here is enough reasonable suspicion to get a warrant from a magistrate. That’s enough for us to search this house and take away whatever we think could have been used in acts of terrorism.’
“I do a lot of writing, I had various personal accounts people had given me who had actively been followed daily by MI5 who were attempting to recruit them. Accounts from people who were approached on holiday, by texts or in the street, I believe that’s what brought them here.
“There has been a real clampdown on the party, though it has been done in a very covert way. Saoradh had their Ard Fheis on the same day as Sinn Féin, for nights before our members were arrested, on our way to and from the Ard Fheis we were taken out of cars and searched.
“I want to highlight what they do with people’s property once they take it. Most people’s property is left lying for years, I’ve spoken with people recently who have had their property returned and it was smashed to pieces. Other people have had their stuff returned unopened. A guy was telling me that they took his laptop and iPad for 18 months and when he got them back they were unusable because they were left for so long.
“None of these people have ever had charges brought against them, this is something people need to know about.”
Nuala continued: “We are supposed to be in phase of accountability here, we heard in 2007 that Sinn Féin were going to put manners on the police, but we didn’t hear in 2007 that MI5 were in the driving seat, overseeing nearly every aspect of policing here. What’s transparent now is just how much control they have in this place and it’s all going unchallenged.
“This is the first they’ve raided my house, I know people whose lives are upside down with this, they are stopped and searched day and daily in front of their kids, it’s pure intimidation and harassment.”
A spokesperson for the PSNI said: “Whilst a number of seized items have been returned, police continue to conduct examinations on other seized property, which will be returned where possible.”