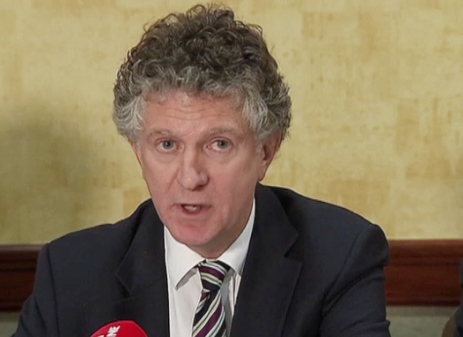 THERE’S been a mixed political reaction to the formation yesterday of a new group formed to address criminality, political apathy and educational underachievement within the loyalist community.

The Loyalist Communities Council (LCC) will consist of two members of three proscribed loyalist paramilitary groups – the UDA, the UVF and the UVF-linked Red Hand Commando. The LCC will be chaired by a former senior aide to David Trimble, David Campbell.

Tony Blair’s former Chief of Staff, Jonathan Powell, has been instrumental in the work leading up to the formation of the new group. He said at the launch yesterday: “The misuse of loyalism for criminal purposes will not be tolerated. The real test will be in how these undertakings are implemented.

“I do sympathise with the victims on all sides in Northern Ireland and their needs have to be addressed, but we also need to find a way to move on. You actually need someone to have that title so long as they're not involved in violence or criminality."

But SDLP South Belfast MLA Claire Hanna welcomed any move towards peace but added that in some respects the formation of the LCC was “worrying”. She also cautioned against the immediate channelling of any fund towards the new group.

“Any genuine attempt to move paramilitary gangs away from violence is to be cautiously welcomed but there is something worrying about formalising and co-opting these organisations in order to have them leave the stage,” she said. “The success of this new Loyalist Community Council will only be measured by tangible evidence that loyalist paramilitaries have disappeared. Certainly, we should be getting the good behaviour up-front before the grant applications start to be written.

“There are a number of problems with this new body, not least that the council will include members from each the UDA, the UVF and the Red Hand Commando which are all proscribed organisations that are still active in racketeering, intimidation and violence across Northern Ireland. There is also a major credibility and coherence gap in light of the statement just last week from the South Belfast UPRG that their UDA bedfellows would be going nowhere"

“The fact that three paramilitary groups have given their backing to this initiative is a positive statement of intent that they are prepared to look at how we can move forward in Northern Ireland,” he said.

“Any proposals which can help in a transition away from the issues which have blighted many communities must be welcomed. If we are to have a more normal society here, then that should be one free from paramilitary activity on all sides.

“Included within the talks at Stormont at the moment is the need to end paramilitary activity and a positive step from within loyalism should be welcomed by everyone.”

“In recent months alone unionist paramilitary groups have murdered Brian McIlhagga in Ballymoney and are involved in on-going drug dealing and extortion,” he said.

“The continuing criminality of loyalist paramilitary groups remains a scourge in loyalist working-class areas. However, engagement with loyalists to move them away from violence and criminality is something I would encourage.

“And we also need to be conscious of the sense of abandonment felt in loyalist communities and of the need to address loyalist disengagement from the political process.”

East Belfast Alliance MLA Chris Lyttle, while expressing his frustration with the continued existence of paramilitary groups, said his party would work with anyone to improve the lot of people in communities across the north.

“Twenty-one years after the ceasefires and 17 years after the Good Friday Agreement, all paramilitary organisations should have long since ceased to exist instead of subverting democracy, the rule of law, good relations and development through illegal means,” he said. “Paramilitary violence and criminality does nothing to tackle inequality or support re-imaging and regeneration in areas that need it the most in our community. The message must be very clear – there is no place for paramilitarism or violence of any kind in a new and shared Northern Ireland. There should be no need for anyone to clarify a commitment to purely peaceful, democratic and law-abiding means at this stage.

“Alliance ministers and elected representatives are fully committed to promoting positive and mutually respectful cultural expression and to working collaboratively to deliver a wide range of inclusive initiatives to improve the educational attainment, employability, security and confidence of people across our community. We will work together with anyone committed to peace and progress to achieve these important aims.”