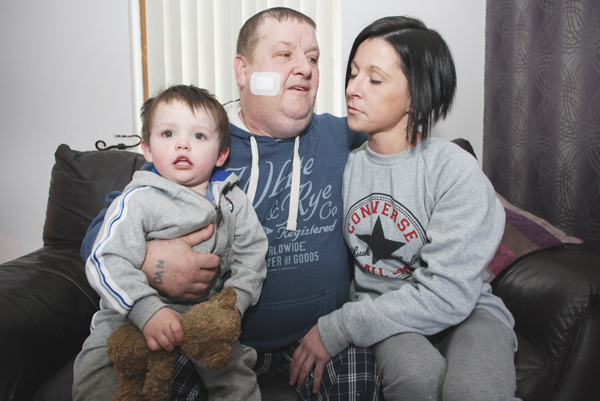 Dan Murray with his son Podraig (2) and partner Ciara Austin after an attempt on Dan’s life last August Two gunmen targeted Dan Murray at St James Mews, off the Antrim Road, It is understood the masked pair got into the house he shares with his partner and child and shot him as he tried to flee. He was hit in the face. Dan Murray has since undergone emergency surgery at the Royal Victoria Hospital and is now in a stable condition. No-one has claimed responsibility

THE fatal bullet which killed father-of-six Dan Murray (55) exited the same wound on his face left by the attempt on his life at his North Belfast home last year, his devastated partner has revealed.
Ciara Austin was giving details of an autopsy report into Mr Murray’s murder as his body was released to the family to begin preparations for his funeral which is scheduled to take place in West Belfast on Monday. Ciara told the North Belfast News that early reports that Mr Murray was shot twice in the back of the head while delivering a take-away order on Monday night were incorrect and that a single bullet fired in the driver’s side window of his black Ford Focus had been fatal.
Ciara said that police were still searching for the bullet but confirmed that the one shot had exited “the exact same” wound left by an attempt on her partner’s life by masked men in August at their family home in St James Mews.
Detectives investigating the murder of Mr Murray say a gunman, or gunmen, lay in wait in Lady Street off the Grosvenor Road as Mr Murray was lured to the area by a fake delivery order placed with his partner Ciara, who was working on the desk of a popular west Belfast take away.
The PSNI also said that the call was placed from a phone box on the Antrim Road 20 minutes before his murder.
On Wednesday night police raided a home in the Falls Road area and arrested a 38-year-old man in connection to the murder.
Speaking openly about her devastation, Ciara said that she did not even know how to go about explaining what had happened to the pair’s two-year-old son Podraig.
“As much as I know he is away and he is not coming back, there is still a tiny, tiny bit of me that keeps waiting on the phone to ring and for someone to say they made a mistake, it wasn’t Dan,” she said.
“For a while after that happened (the first attempt on Mr Murray’s life in August), I could see it was bad but I don’t think he was telling me how bad it was.
“Dan was a big man but there were nights he was waking up and squealing my name. He said ‘Ciara every time I close my eyes all I just keep seeing them standing over me’.”
Ciara said that the first murder bid had left Dan constantly on edge, However, in recent weeks she believed their lives were starting to get back to normal.
“We went away for my 30th birthday a few weeks ago and we were away for a few days and he said it was the first time in a year he had felt relaxed and stress free. I think he thought he was now safe and they had left him alone,” she added.
“Thinking back now Dan actually forseen his own murder. On numerous occasions we spoke and he told me that if they were ever coming back, they were coming back to finish him. No matter what the weather Dan always kept his window down and he’d suggested it would be an ambush similar to the what happened.”
Ciara, who is seeking emergency re-housing, denied rumours linking her partner to drugs and described the brutal killing as a “personal vendetta”.
“Everyone knows it wasn’t drugs. It was a personal vendetta. When the police asked me about the rumours going around about a drugs link I put it to them whether Dan ever had a drugs-related conviction or whether they had ever investigated him, because it’s not true.”
Mr Murray’s Requiem Mass will take place at Holy Trinity Church in West Belfast at noon on Monday.