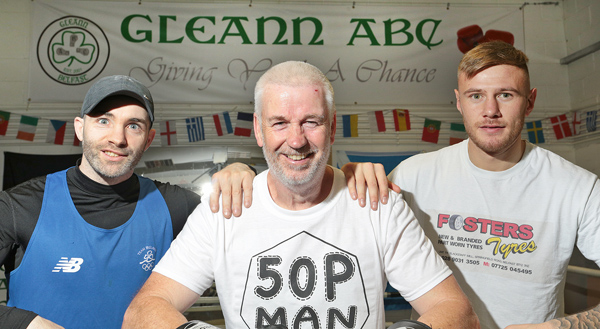 BALLYMURPHY grandfather Gerard McCullough is doing something different for his 60th birthday by becoming the 50p Man and asking his friends and family to donate that sum to help raise much-needed funds for the Child Brain Injury Trust.

For his 60th birthday this week, Gerard is running up the Divis Mountain, then cycling back down Hannahstown straight into the boxing ring at Gleann Boxing Club where he will be taking part in a match against European Junior Boxing Champion Anthony Johnston and Irish Champion Martin McCullough.

Gerard’s marathon fundraiser takes place ON Sunday, October 16. The Child Brain Injury Trust have over the years given vital support to his 15-year-old grandson Tiernan.

“Tiernan suffered from two strokes when he was three-years-old and as a result Tiernan was left with significant neurological difficulties including memory loss, concentration difficulties and problems with behaviour, communication and social skills,” said Gerard.

“Tiernan has come on leaps and bounds since then, but will continue to need support and care for the rest of his life.

“With the support from the Child Brain Injury Trust, everyone has a better understanding of the difficulties that Tiernan has and will continue to have, along with ways to support him into the future.

“By raising funds like this, the Child Brain Injury Trust will be able to continue supporting hundreds of families from across Northern Ireland affected by childhood acquired brain injury.”

Anyone wishing to support Gerard on his run, cycle and boxing match can visit http://uk.virginmoneygiving.com/fundraiser-web/fundraiser/showFundraiserProfilePage.action?userUrl=GerardMcCullough