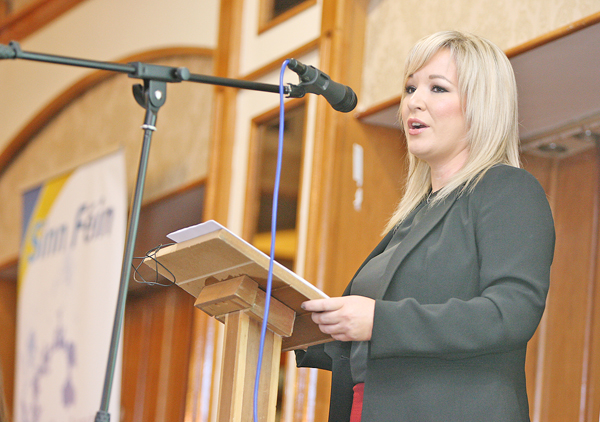 90 PER CENT of the Stormont budget will be spent on health by 2016 if urgent steps aren’t taken to reform the system.

That was the stark message from Health Minister Michelle O’Neill as she yesterday unveiled a 10-year plan based on the Bengoa report on the Health Service here, released earlier on the same day. Hospital reform is key aspect of the Executive vision, although no closures were announced Minister O’Neill said that Trusts would have to prove their major services are viable in order to keep them open.

Other key points in the plan were:

Putting the spotlight on partnership and co-design

An increased focus on prevention and wellness

“Our current delivery models have had a negative impact on the quality of care,” Minister O’Neill told the Assembly. “The current model is unsustainable.If we continue as we are now, the system in 10 years would need 90 per cent of the entire Executive budget."

She added: “We have an opportunity for a fresh start, supported by the Executive – not just the will of one minister or one department. There is total agreement across the Executive that this needs to be done. This change will be planned, managed and incremental. This is not a Big Bang.”

Deputy First Minister Martin McGuinness said: “Change has to happen and the only question is whether it will happen in a controlled, planned fashion or unfold out of control. There is only one responsible choice to make.”

First Minister Arlene Foster said: “[The strategy] represents a challenge to politicians, but it is a challenge this Executive is going to meet head-on.”

Professor Rafael Bengoa, who chaired the review panel, said: “It [the Health Service] can either resist change and see services deteriorate to the point of collapse over time, or embrace transformation and work to create a modern sustainable service that is properly equipped to help people stay as healthy as possible and to provide them with the right type of care when they need it. We have tried to produce a report that will make a practical contribution to implementing change and which will support the minister's ambitious, and wholly necessary, roadmap to reform. Transformation will not be simple, but the panel has no doubt that Northern Ireland has both the people and the energy to deliver a world class health and care system.”

Mrs O’Neill a plan for children in the care of the state would be in place by 2017. She addded that resources would be put in place for every GP practice to have a named district nurse, health visitor and social worker. The number of GP training places is to rise to 111 – 12 more places next year, 14 the year after that.

SDLP health spokesperson Mark H Durkan MLA said: “We welcome that the Minister has agreed to appear before the Assembly twice a year to update us on her progress but she cannot assume that this is the only engagement that the SDLP will have on such an important issue. It is in the public interest for us to critically engage with her regularly in the time ahead to ensure that any changes are equitable and justified.