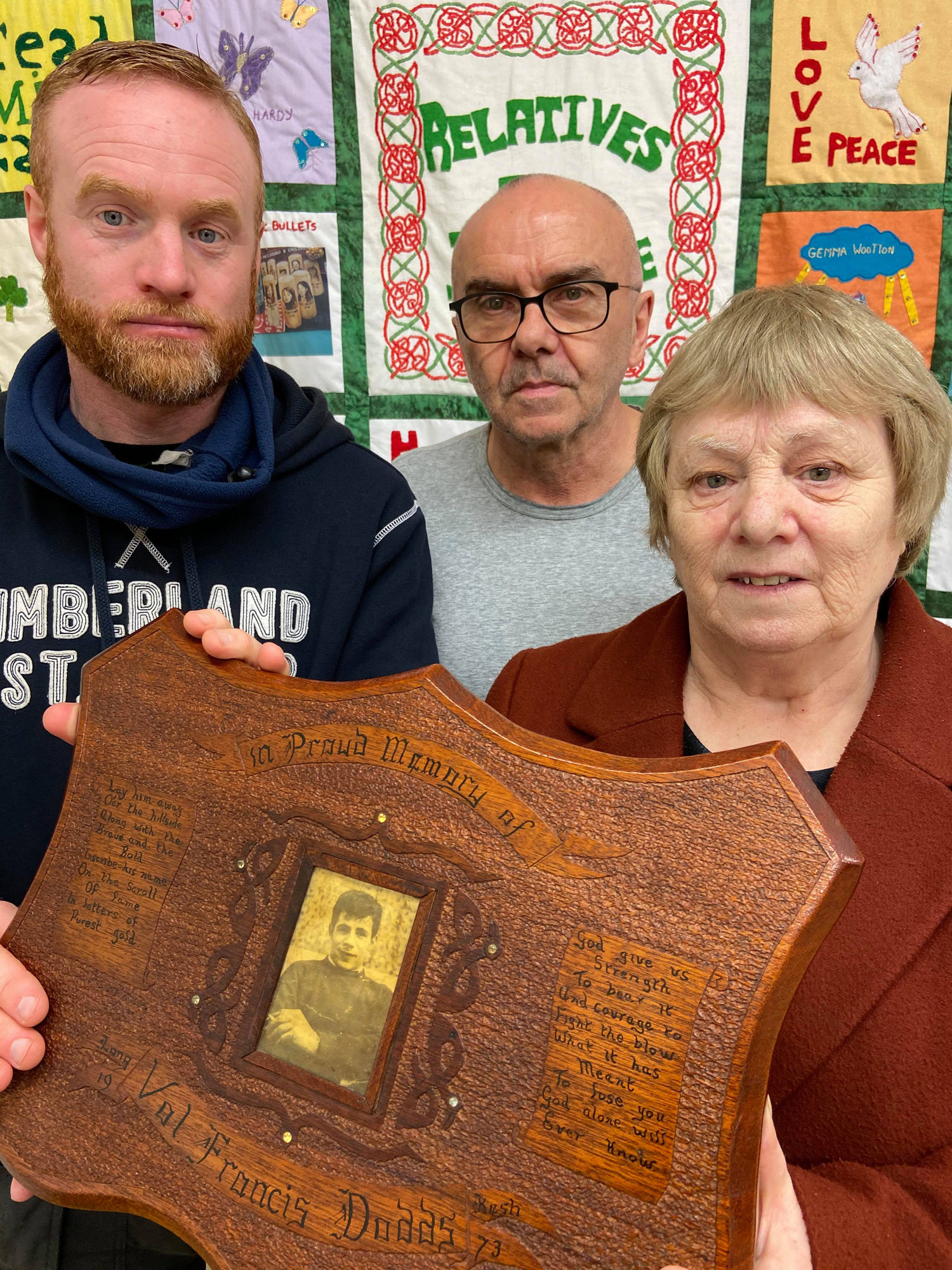 CALL: Joan and Paddy Nolan with Paul Butler of RFJ holding a picture of Francis

RELATIVES For Justice (RFJ) are to ask the Attorney General for a fresh inquest into the circumstances surrounding the death of republican prisoner Francis Dodds.
From St Katherine’s Road in St James’, Francis Dodds (31) was sentenced to four years imprisonment in March 1973 for possession of explosive material. The father-of-four was sent to Long Kesh, Cage 18, to serve out his sentence. It is understood that when Mr Dodds arrived he was in his bare feet after his shoes were confiscated. That night a serious confrontation took place which resulted in British troops being sent in to restore order. Francis was on the receiving end of a severe beating which left him heavily bandaged and needing crutches to walk.
Medical notes detail how Mr Dodds consistently sought medical attention for chest pains, extending to his left arm and for a discoloured and infected big toe. The Medical Officer for the prison examined him and recommended that he be referred for an arteriogram. Despite this no arteriogram was ever carried out. On September 8 1973 Francis was examined by a doctor and told he was fine. The following day, September 9, he collapsed and died. The post-mortem report determined that the cause of death as coronary thrombosis.
Mr Dodd’s sister Joan Nolan told the Andersonstown News that any information from those who were in prison the same time as her brother would be of great help to her family’s case.
“I was 22 when Francis died, there were six of us and Francis was the only boy. I had gone to Canada and was in Canada when Francis died. I didn’t get home for the funeral and Canada was just a nightmare then,” she said.
The Dodd’s family, supported by RFJ, say Francis’ death may have been avoided if he had been removed from Long Kesh for thorough medical examination. Joan described her brother as very much a “joker” and “young at heart”.
“Francis left behind a wife and four children. He would have been a very proud father with his daughter getting her 11-Plus and going to St Dominic’s Grammar School.
“Unfortunately I’m the only one left of the family, any fresh information would be very beneficial to the family, he was my brother.”
Speaking on behalf of RFJ, caseworker Paul Butler said Mr Dodds had been complaining of chest pains for several months before his death.
“The prison’s medical officer had attended to him on six different occasions in the weeks before his death. Moreover, in April and May 1973 – four months before he died – Francis had been taken to Lagan Valley and Royal Victoria Hospitals in relation to pain in his left foot which was also discoloured and obviously a circulation problem.
“The hospital had recommended that he be referred to the Royal Victoria Hospital for an arteriogram. This is a procedure that examines the arteries to see if there are any blockages. The prison governor refused to allow this and unfortunately Francis was returned to Long Kesh and no arteriogram took place before he died.”
Former prisoners can contact RFJ on 02890 627171 or email paul.butler@relativesforjustice.com