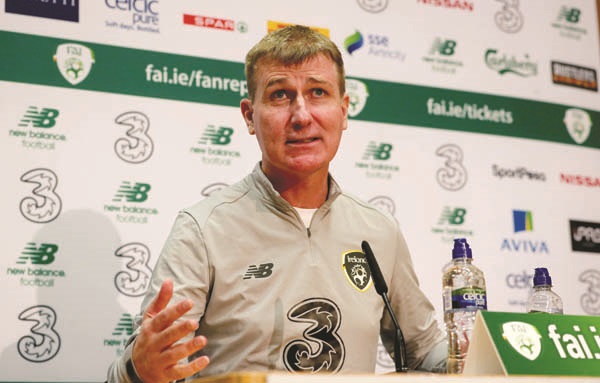 STEPHEN Kenny has said that while he is delighted to be officially appointed Republic of Ireland manager, his immediate thoughts are with those who are leading the fight against COVID-19.

Last weekend, the FAI announced that Kenny was to take over from Mick McCarthy with immediate effect due to the delay to the European Championships' playoffs and the tournament itself.

McCarthy’s contract was due to expire on July 31 after the Euro 2020 finals, with Kenny initially scheduled to step up from his U21 team role on August 1, but it was decided to promote the Dubliner now in order to give him more time to prepare for the playoff semi-final against Slovakia later in the year.

“It is a good day but we're not in celebratory mode,” said the new Ireland manager.

“My thoughts are with the front-line workers: doctors, nurses, paramedics and everyone. The self-sacrificing is heroic so we really support them.”

Having enjoyed a successful career in club management and an excellent stint with the U21s, Kenny's appointment has been greeted with excitement by Ireland fans who will hope his past performances can translate into success with the senior squad.

McCarthy came into the role after the departure of Martin O'Neill and came very close to automatic qualification for the Euros, but fell to defeat away to Switzerland and despite a great performance, could only manage a 1-1 draw at home to Denmark in the final game when victory was required.

Kenny says he empathises with McCarthy who didn't get to complete the campaign but thanked him and his backroom team for their work to date: “Mick has had a tremendous career as captain of Ireland and manager on two occasions.

“He leaves a legacy behind him and it's just unfortunate with the cancellation of the matches it's been an unfortunate situation.

“He's revered in Ireland and the contribution over the last couple of years of Robbie Keane and Terry Connor has been remarkable.”

With the playoff semi-final against Slovakia expected to take place in autumn, Kenny will be tasked with helping the Ireland team navigate a hectic schedule with the strange scenario of World Cup qualifiers and Nations League games to plan for as well.

“I feel it's an incredible year - unprecedented,” he agreed.

“You've got the playoff against Slovakia and then the Nations League - six games in that and World Cup qualifiers. That's never happened before where you've all that in the same year - nine games between September and November. It's an incredible schedule and a very exciting year, so we've a lot to look forward to.”

Former Ireland internationals Keith Andrews, Damien Duff and Alan Kelly have all been confirmed as part of the backroom team and Kenny says he is delighted to have all three on board.

While sport is in lock-down at present, Kenny and his team will have to wait before they can get their tenure underway, but he is happy to take a back seat for now with greater problems in society to deal with.

“At the moment we've really got to stay safe and look after each other,” was his message.

“There is a lot of tragedy throughout Europe and in Ireland, people have been very disciplined, so I hope we see the benefits of that one.

“A lot of people have lost their lives and our thoughts are with them. There are better days ahead and we can look forward, in a sporting context, to what is a magnificent year in football in the Aviva Stadium over the course of the year.”