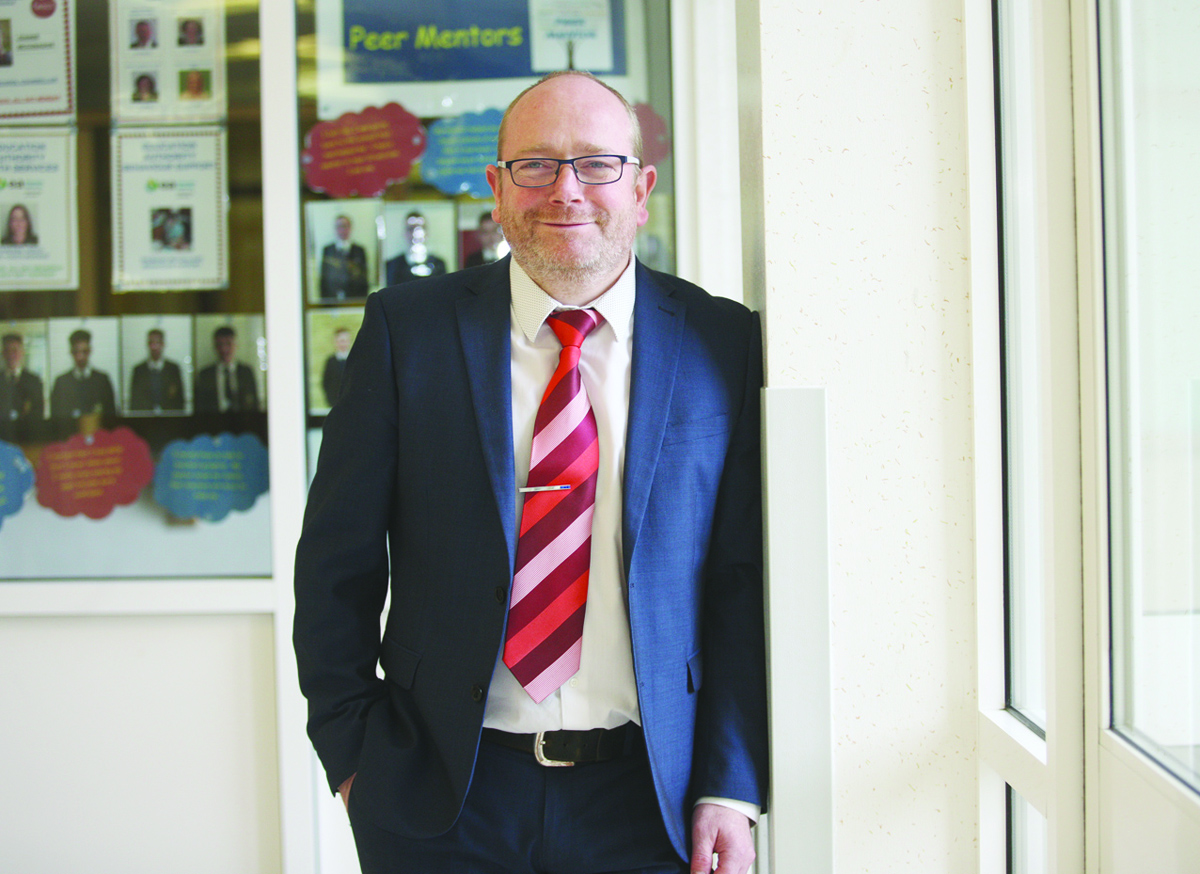 The only thing constant, it is said, is change, and within the education sector that is doubly true with strategies and policies introduced at the whim of politicians who have their own ideas about the future of schooling.

Edmund Rice College in Glengormley has experienced more upheaval than most over the years, but what sets the institution apart is how it has embraced these shifting realities and continues to thrive.

The school that started as a technical college on Hardinge Street in the New Lodge before moving to Park Lodge for a period is about to mark it’s 40th anniversary of putting down roots on the Hightown Road in Glengormley. And as if to emphasise its ability to adapt and excel, the birthday will be marked with the introduction of girls to the rolls for the first time.

It is this development that principal Peter Friel says is perhaps the most exciting to happen in the history of the school and will be central to the 40th anniversary celebrations.

“The strap line we have been working with for the last few months is ‘Proud Past, Exciting Future’ and that I think encapsulates where we’re at in the history of Edmund Rice College.

“It has been 40 years since we moved to Glengormley and it’s been a proud 40 years through very, very difficult times in an area of the north that has experienced more difficulty than most. The school has not only survived all of that but gone from strength to strength.

“Our technical background has been entirely in keeping with the ethos of Edmund Rice which was to try and ensure that education was provided to children of all abilities and social backgrounds, and the school continues to do that to this day.

“Over the years the breadth of the curriculum we offer has widened to cater for children of the highest academic ability so they can leave here with 10 and 11 GCSEs followed by often three or four A’s at A Level. On the other side of that in the same school we have children who are technically minded leaving with seven or eight GCSEs but of a more vocational and technical nature.

“In some ways the curriculum has nearly come full circle. We now would have a strong focus on carpentry and joinery as an occupational study. We also have a vehicle workshop within the school and this year we have opened a hairdressers and barbers facility to reflect not only the changes in the curriculum but more importantly the job market and where the jobs are.

“It’s brilliant that a school can provide that opportunity and what happens then is those lads leave here with a qualification in something they have a genuine flair for. “That gives us immense pride. Nobody leaves this school a failure. Last year 95 per cent left the school with five or more GCSEs. If you consider these kids are arriving to us told they are failures at 11 it’s quite a staggering statistic. That is achieved through extremely hard work from the teachers and the pupils and good relationships with the community and with the parents. “

“A big thrust from the governors is that Edmund Rice College needs to become increasingly reflective of the local community and intrinsic to the local community and for that reason we are now move to become an all ability, co educational establishment. We accept children from all faiths and none and of all abilities. The curriculum is built to meet the needs of that breadth of population.

“I genuinely believe it’s a really exciting time. Organisations can go through periods that are truly transformational and I think that opportunity exists here. Parents have an opportunity to make decisions on their future not based entirely on whether they pass or fail an exam, but rather where is most suitable for their family to go to school as a family.”

“A good indicator of success for me would be that the parents of children in the Glengormley area would no longer feel the need that their children sit a transfer test because the school on their doorstep fulfils the needs of all of their children. That’s the type of school I went to (St Pat’s Maghera) and it served my siblings and myself very well. As the girls come the school will continue to grow.”

What marks Edmund Rice College out is the commitment the staff has to the school. Peter says this is based on familial links.

“It’s a source of pride at the school that we have so many people here who have a very long association with the school and that goes right across from governors who have went to the school and are now putting their children through the school.

“John Joe Rafferty, Paddy McMeekin, Sean Fleming and Pat McKinney and Colm Mulgrew have all many decades of service as teachers. Ancillary staff member Pauline Short has been here for almost 30 years and Fiona McDonald works in administration having followed in her mother’s footsteps. Senior teaching staff member Paul Bierne’s mother Mary worked here as an ancillary staff member until her recent retirement and Stephen Dowds and Stephen Graham are teachers who went to the school. Alistair McAllister the caretaker is a past pupil and Aisling Farrell who works in the office is the daughter of long standing staff member Marsella McGrath.

“It’s that family feel of the school that ensures there’s a very strong bond between us and the community. The ethos is something we take very seriously and it’s a very important thing to maintain. Equally, it’s a challenge to maintain that over the next 40 years.