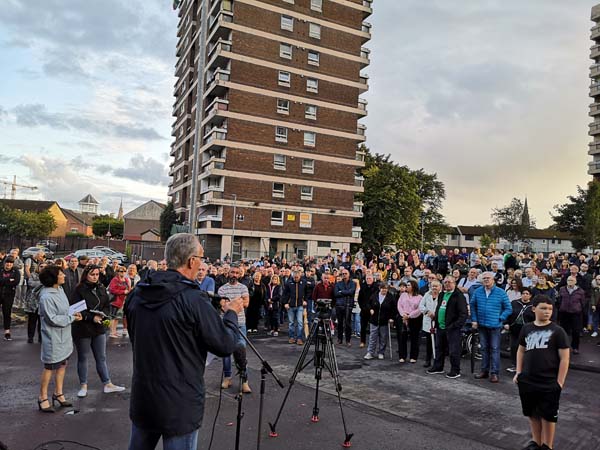 Hundreds of people attended a community protest in the New Lodge following days of serious anti-social behaviour.
Organised by Sinn Féin, the demonstration was held in response to unrest and violence surrounding an anti-community bonfire last week.
Addressing those gathered last night, Paul Roberts, Chief Executive Ashton Community Trust, said: “When I see those reports on the TV news and the reports on the radio, that doesn’t reflect the area that I’m from and that I’m so very proud of. I know there are great problems with the area, with Universal Credit, lack of money and the scourge of drugs, but there are also lots of amazing people and lots of great work being done by groups and individuals. Every day the community groups, the soccer, GAA and boxing clubs, the residents’ groups, the arts groups and youth groups are working to make the New Lodge a better place for people to live.”
Mr Roberts praised the work of the young people who are involved in the area’s various community projects.
“Despite the mindless thuggery of the bonfire, we’ve had a very successful community festival in the area over the last couple of weeks. Even on Thursday, we had a family fun day, where kids were laughing and dancing, but we didn’t see any of that on the news.”
He added: “As a community, we will not let sinister elements and a small group of thugs ruin this area, nor will we allow young people to be demonised. This community will stick together and come through stronger and more confident.”
Speaking at the rally, Sinn Féin MLA Carál Ní Chuilin vowed that the bonfire “is not going to happen again”.
“50 years ago we had to leave our homes because we were under threat from outside of our community,” she said.
“50 years later we have had to ask our families to leave their homes because of a threat within the community.
“That is not going to happen again - never, ever again.
“The children in this area are at around 3,000 and they are a credit to their families and a credit to this community. And it is those young people, for all residents and particularly our older residents, that we must ensure that this area and this community is as safe and healthy as possible and that it will flourish.
“Throughout the past couple of years, we have heard repeatedly that the people of this community did not want a so-called anti-internment bonfire.
“We called this rally to give support to residents and workers and established statutory bodies that work in this area to keep this area safe and also to reclaim this community.”