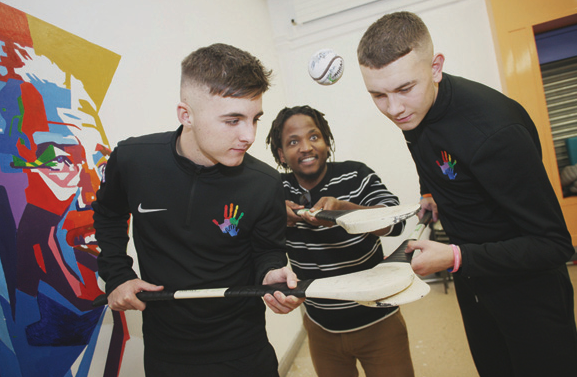 CAPTION- SHARING SKILLS: Christopher Laverty and Conor McAuley from New Lodge Youth Centre with Amimi Mlaba from the Isithumba Community Development Movement in Durban, South Africa on his visit to the New Lodge

IT has been over a year in planning but an exciting inter-cultural project between the New Lodge and South Africa is just over a month away.
Four young people from New Lodge Youth Centre are preparing for the experience of a lifetime with the Isithumba Community Development Movement, based near the city Durban.
New Lodge Youth Centre recently welcomed Amimi Mlaba from the project to North Belfast, with final preparations being made for November’s trip.
Amimi said everyone in Isithumba is excited to welcome the young people from New Lodge Youth Centre.
“Our project is based in Isithumba village, which is situated 45 minutes from the city of Durban,” he explained.
“The village has a population of 2000 people and we provide the young people with after-school programmes and education through sporting activities.
“We are also involved in inter-cultural projects, of which New Lodge Youth Centre is one of them.
“I stand a chance to learn a lot about the New Lodge and North Belfast. I have also tried hurling, which I am not very good at but I hope to get better!
“Everyone in our village is excited about welcoming young people and youth leaders from New Lodge Youth Centre to South Africa in November.”
During Amimi’s visit, Conor McAuley, who is going on the trip, unveiled his South Africa mural, dedicated to Nelson Mandela, which is now displayed on a wall of the youth centre.
The mural includes a range of colours, including those of the South Africa flag and Conor hopes younger members can learn from it.
“I study art at university and the youth group wanted me to do something around the South Africa project.
“I came up with the idea of doing a mural. I just had a look around for some images associated with South Africa – of course Nelson Mandela being the legend he was. Everyone has been really positive about it. The young people were really interested in what the mural was going to be and I hope they can learn a lot about Nelson Mandela and South Africa from it.
“I tried to incorporate as many colours as I could to make it attractive and, of course, the colours of the South African flag.
“It has really got me excited and I can’t wait to go to South Africa in November. It will be the experience of a lifetime.”
Whilst in South Africa, young people from the New Lodge will help with the refurbishment of a local primary school and help build a children’s play-park. They will also teach basic English, work on farms and help with day-to-day tasks in Isithumba village.
Youth leader Paddy Doyle said he wants the young people to use their experiences from South Africa in everyday life in North Belfast when they return home.
“We’ve been working on this project for over a year now with Isithumba Community Development Movement in Durban, South Africa,” he said.
“We want our young people to use the skills they will learn back home in their own community in the New Lodge. All being a success, the boys will be youth leaders on next year’s project
“Everyone has really got involved in the project to date. We have received a lot of positivity on social media about the South Africa project and I think everyone recognises the good work that we will be doing. It’s almost official now that we have welcomed Amimi to the New Lodge.
“We want to show young people that there is a world of opportunities outside of the New Lodge. It is all about learning and culture. The boys will also be taking part in some traditional Zulu sports and we will be teaching them hurling in return.
“It is the opportunity of a lifetime for these young people and I hope they make a huge impact on the lives of those they meet and I hope they leave a lasting impact on the children and young people in South Africa.”
You can keep up to date with the progress of the New Lodge Youth Centre’s South Africa project in the North Belfast News.