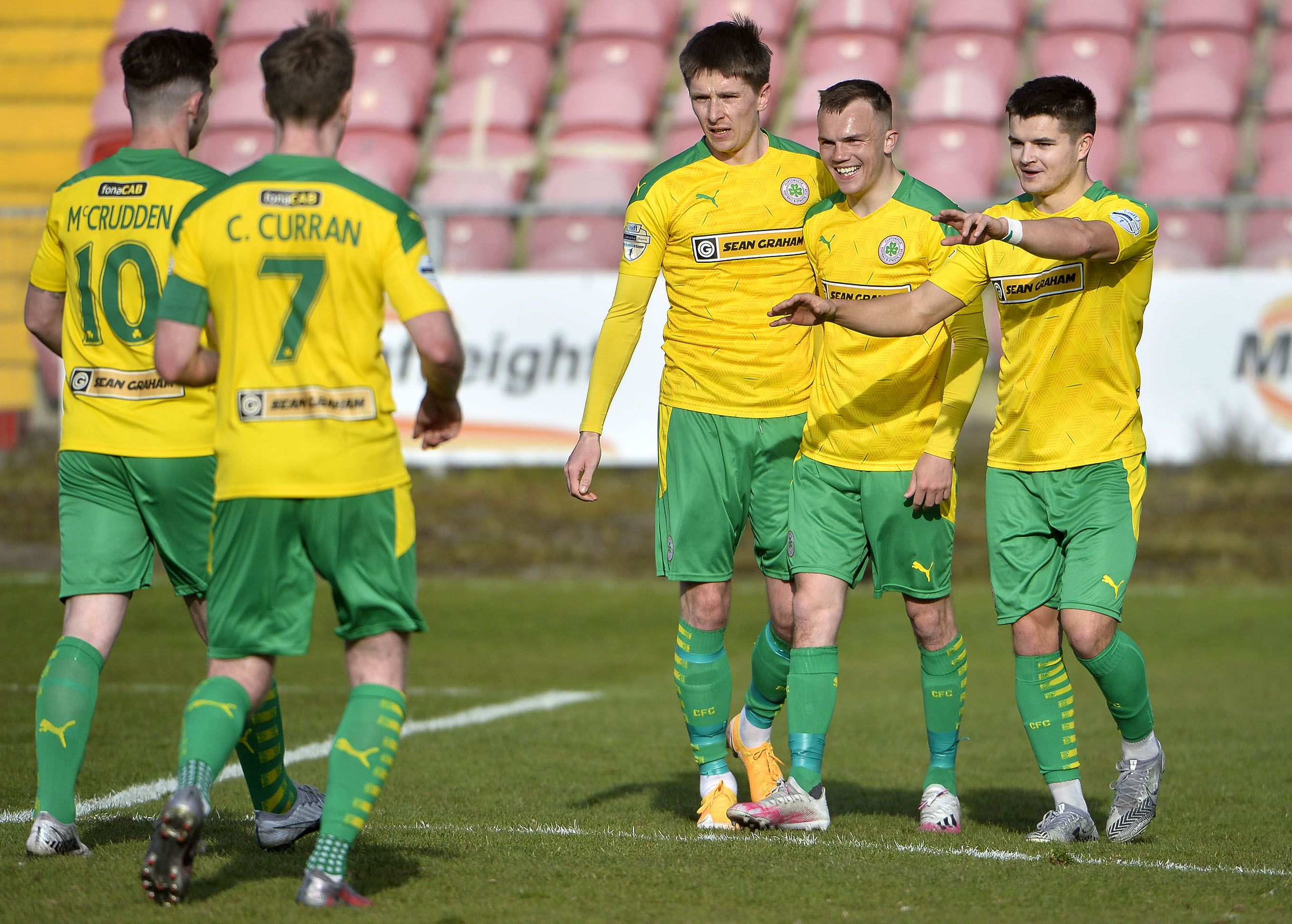 CLIFTONVILLE secured a top-six finish and ensured a place in the end of season European play-offs with a hard fought 2-1 win over Portadown at Shamrock Park on Saturday evening.

Ryan Curran steered home the opener just before the half-hour mark and doubled his tally a few minutes later via a deflection.

Portadown pulled a goal back before the break through a deflected Ben Tilney strike. However, the hosts were unable to find an equaliser in a second half that was largely dominated by Paddy McLaughlin’s side.

Reds boss McLaughlin was keen to praise on-loan Ports ’keeper Jacob Carney for his Man-of-the-Match performance and felt his side could have had a better margin of victory on another day.

“It was a good win,” reflected McLaughlin.

“We’d loads of chances throughout the game, numerous chances and golden opportunities to put the game to bed. It was brilliant goalkeeping from Jacob Carney.

“You’ve got to give him all the credit in the world, I thought he was superb. He’s been like that against us earlier in the season so fair play to him. He’s a young boy coming over from Man United and he’s proved his worth today. It was a fantastic performance.

“We’ve grinded it out in the end, but the most important thing was to win the match, that’s what we’ve came here to do. It wasn’t a classic performance and I’m sure it wasn’t one of our best but it was effective, we won the game and that’s what’s important.”

McLaughlin was poised to name an unchanged starting 11 for the fourth game in succession until Jamie Harney pulled up with a back injury in the warm-up and was replaced by Garry Breen.

Cliftonville made a bright start in the sunshine at Shamrock Park and were almost ahead inside of two minutes.

Daire O’Connor saw his shot blocked and Chris Curran likewise with a follow-up attempt that was blocked on the line by Adam McCallum.

On the quarter-hour mark a defensive clearance from O’Connor saw him burst down the right channel and turn defence to attack and he pulled the ball across for Chris Curran whose low effort was gathered by Jacob Carney.

A defensive mishap from Greg Hall allowed O’Connor in behind the Ports defence, but Carney stood strong and parried the shot clear.

It seemed only a matter of time before Cliftonville would make their pressure tell and, on 27 minutes, the breakthrough arrived for the Solitude side.

Daire O’Connor was involved moments before as he slipped in Chris Curran, only for Nathan Kerr to clear the danger in the nick of time.

Although it was Ryan Curran who steered the opener home from Rory Hale’s shot to claim his 14th league goal of the season.

Curran doubled his and Cliftonville’s tally seven minutes later, Garry Breen sent a long ball forward and Michael McCrudden’s knock-down fell nicely for Curran whose shot took a deflection and found the net to make it 2-0.

At the other end Aaron Donnelly’s corner was taken down by Ryan O’Reilly, the Ports defence made a half clearance though Rory Hale picked up the loose ball and fired in a low effort which was cleared on the line by George Tipton with Donnelly trying his luck and Jacob Carney eventually gathering.

Carney was full stretch moments later to deny in-form Michael McCrudden who received a knock-down from Ryan Curran and attempted to dink it into the top corner only for the Ports ’keeper to pull off a magnificent stop.

Just before the break it was game on at Shamrock Park as Portadown pulled a goal back. George Tipton’s corner from the left dropped in the area and Ben Tilney’s volley took a deflection and ended up in the net to make it 2-1 at the break.

Cliftonville almost restored their two-goal lead when Aaron Donnelly’s corner from the left was cleared as far as Rory Hale whose shot was blocked and fell to Ryan O’Reilly and the centre-half saw his effort turned over by Carney.

Just after the hour-mark O’Connor slipped the ball to Chris Curran who left it for Hale and the midfielder’s effort could only find the side netting.

Midway through the half Aaron Donnelly cut the ball forward to Michael McCrudden whose shot was blocked by the foot of Carney.

The chances continued to fall for the Reds as Donnelly sent in a low cross which McCrudden stabbed inches wide.

McCrudden then almost turned provider with a delicious through ball to O’Connor who was able to shake off the attention of Greg Hall, O’Connor then let fly with an effort that Carney flapped at, but the keeper gathered at the second time of asking.

Portadown pushed for a late equaliser, though Cliftonville held out to secure all three points which was enough to ensure a place in the end-of-season European play-offs.