No rush for ‘Baby Faced’ Tennyson 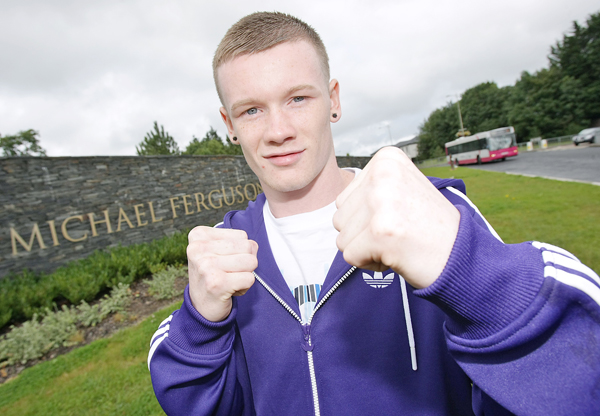 JAMES TENNYSON’S amateur coach, Ralph McKay says it will be baby steps at first for the ‘Baby Faced Assassin’ as the Poleglass native prepares for his professional debut at the Holiday Inn on September 8 (2012).

Having recently signed his pro forms after making the switch from the amateur code where he excelled, Tennyson will begin life in the paid ranks at super-featherweight and his coach believes the time is right for him to make the switch.

“James has been boxing since he was seven years old. He progressed through and won Intermediate titles in Ulster and Antrim,” he said.

“Last year he progressed into the seniors to help him grow into a man and get a taste of it but his goal was always to turn professional.”

With a come forward style, the 19-year-old’s style is similar to that other ‘Baby Faced Assassin’, Mexico’s Marco Antonio Barrera and McKay - who will coach Tennyson alongside Tony Dunlop - feels his natural approach is better suited to professional boxing than amateur.

“His performance in the Ulster Senior final last year against James Fryers shows that he is suited to the pro game,” added the St Paul’s ABC man.

“His stature and stamina will help him in the pros because of his style. An opponent is like a red rag to a bull with him as he is always going forward so his aggression is more suited to the professionals rather than amateur boxing.

“James likes to throw a lot of punches, works hard and never gives up.

“In the Ulster Seniors he kept charging forward and if there had been another round he probably would have stopped him.”

There have been quite a number of local boxers turning over to the paid ranks this year and that volume has prompted a number of local promoters to join forces and put together shows that will benefit everyone involved in the sport.

The first of these bills will occur on October 13 at the Ulster Hall and will feature Dee Walsh, Conall Carmichael and Luke Wilton as well as Tennyson, who will be boxing for the second time as a pro.

While McKay intends to keep his charge busy in his early career, he stressed they will not be fast-tracking him, choosing instead to ease him into his career.

“The amateur game gets to a point when they get to the intermediate or senior level and everything stalls for them so that’s why there has been so many turning professional – to see if they can make a few quid,” he added.

“With James we want to start slowly. We don’t want to be taking any huge steps just yet and we have a programme set out to get him rising through the rankings. Within four years hopefully we can have a title fight.

“At the minute we need to build his profile and as a kid from Poleglass, we want others in the area to look up to him as he is a great role model for the area.”