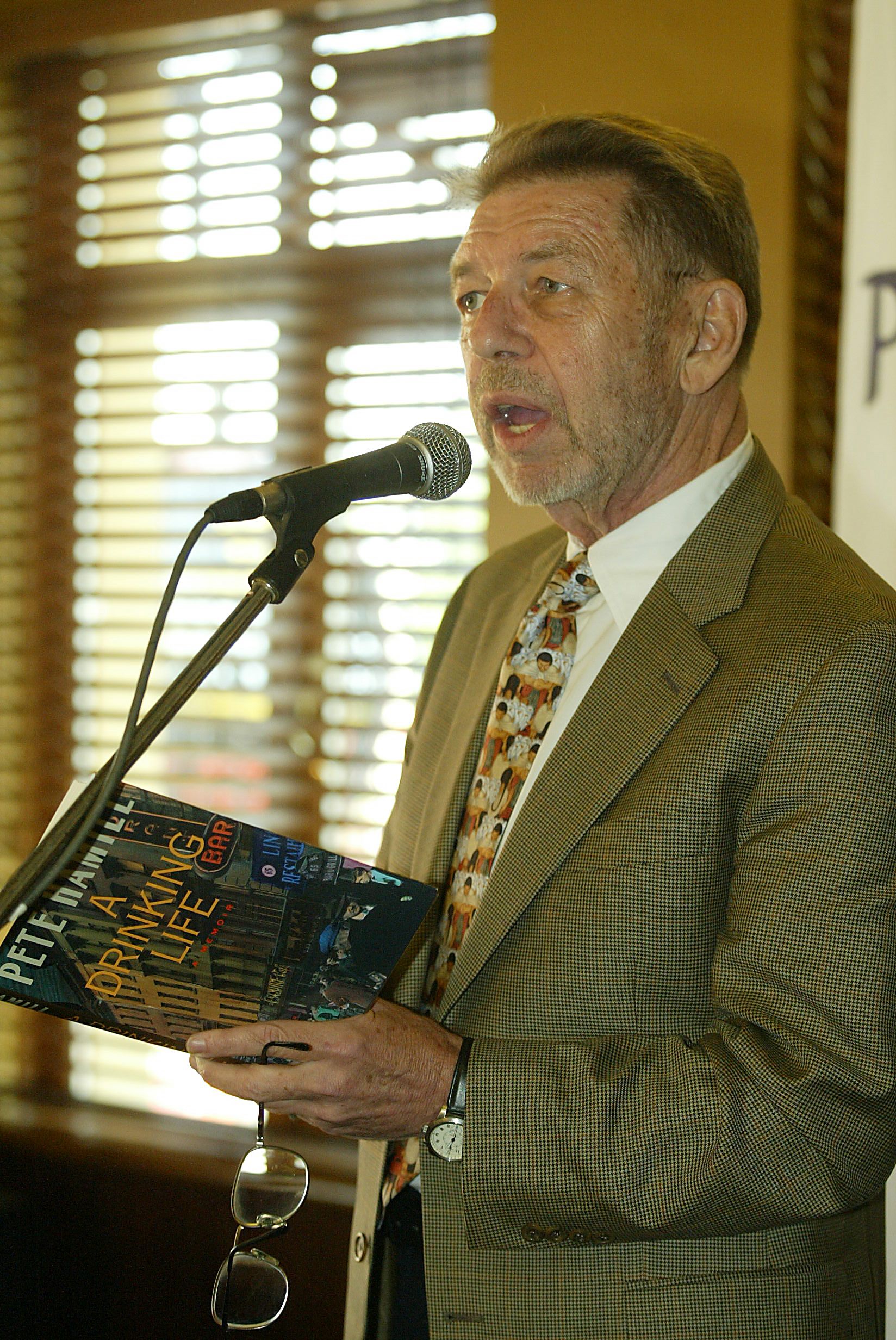 GOOD MAN GONE: Pete Hamill pictured reading in the Rock Bar on his return to Belfast for Féile an Phobail in 2003

Brendan Hamill is a former teacher, poet and writer who lives in the Whiterock area. He is a full cousin of famed Irish American journalist and writer Pete Hamill who passed away in New York recently.

Primarily, Pete Hamill was a writer. He wrote books, short stories and essays including art book. Diego Rivera and the Mexican muralists were all revered by him.

in 1974, he wrote the liner notes for Bob Dylan's album, Blood on the Tracks.

His memoir, A Drinking Life, was a bestseller and Snow in August, North River were too. In all, he wrote 25 books and many screenplays. He had his last drink on New Year's Eve 1972.

He was at various times, Editor in Chief of the New York Post, New York Daily News and guest editor of the New Yorker and New York magazine. A celebrity in his own right, he had an A list of girlfriends including Jackie Onassis, Shirley McLean and Linda Ronstadt.

His most reproduced piece of journalism, arguably the most persona and powerful as well, is his on-the-spot account of the murder of Presidential candidate Bobby Kennedy in a Los Angeles hotel kitchen in 1968. He had worked for RFK for a period and was one of the first people to tackle the shooter Sirhan Sirhan.

For a good part of his life, he lived in the Tribeca area of Manhattan. Many of his novels were made into short films. He also wrote biographies. His book on Frank Sinatra, Why Sinatra Matters, is probably the best-known and was best-received.

He was taught by the Jesuits in Regis High School in Manhattan and they gave him "rigour, high standards, and exactitude".

Naturally enough, he thought of Ireland, homeland of his parents, often. He visited Belfast and Dublin many times since his first visit in 1963 - when he found himself in the Rock Bar as news came through of JFK's assassination.

He was a great admirer of Anton Chekov, the Russian short storywriter and of Albert Camus. Of the Irish writers, he favoured Séamus Heaney, Derek Mahon and Stewart Parker. John Montague, who was also born in Brooklyn, regarded Pete highly.

Pete's passing was mourned by many, including the Governor of New York Andrew Cuomo.

So saddened to hear that Pete Hamill passed away. Pete was not just an unsurpassed journalist, editor and writer — he was the voice of New York.

We say goodbye today to an irreplaceable New Yorker.​ I know that his legacy and work will live on.

A good man and a gifted writer has finished his seasons on earth. His view of death was that it was an interruption.

He is survived by his wife Fukiko Aoki and daughters Deirdre and Adrienne.