OPINION - Andrée Murphy: Devastating impact of post-truth era is only starting to be felt 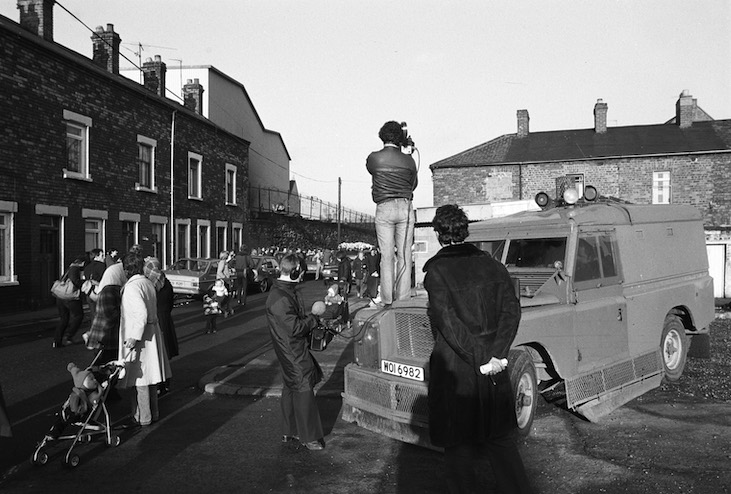 JUSTICE DENIED AGAIN: Stormont House Agreement pledges on legacy and independent investigations binned. Our photo shows funeral of Thomas McNulty, murdered by Loyalists. in Short Strand in November 1981. Picture by Basil McLaughlin
THE Dominic Cummings spectacle cannot be reduced to our view of two road trips during pandemic lockdown. We must look at the far-reaching implications of what is happening.

We are living in an era where truth is not expected to be spoken, exposing lies does not have devastating implications and law can therefore be subverted or ignored. This is not only in English shires. It is not even only in blue collar white America. It is a growing political philosophy that is being elected across the globe.

Lawmakers, and enforcers, are painted as ‘elites’ and ‘disconnected’, while those subverting law and telling lies are painted as connected to the common man.

Last year the entire world became aware that our mobile data was currency and that it was being exchanged for political gain. On these islands we discovered that elections and referenda were being influenced through the receipt and manipulation of the data we share online – in particular through our use of Facebook.

So many families in Ireland will identify with an experience of structural state violence, and structural state impunity, and the value of standing up, and expressed solidarity. We send solidarity to the family of George Floyd and those who stand up for truth and justice https://t.co/mmEwaTbsBs

We also discovered that the Leave EU campaign was illegally financed. Essentially, Britain’s decision to leave the EU is under great question as the methods employed to secure that vote were illegal. There has been zero accountability for that. Zero. Illegality and fraud on industrial scales was reduced to ‘Remoaners’ not accepting the result. The dominating narrative is more important than truth.

The beneficiary has been the man currently occupying Downing Street. There is no doubt that he won a thumping majority last year. The environment in which that general election was held had been created by the Brexit campaign, the Leave campaign win and resulting political discord. The discord created chaos, and chaos has created the Johnson premiership.

This chaos matters on this side of the Irish sea.

The Stormont Executive was re-established on the basis of a document published by the Irish and British governments. Implicit in the agreement is Westminster funding a range of commitments. The ink was barely dry and the seats barely occupied when it became clear that Westminster had walked away with its hands firmly stuck in its pockets.


The document also committed to implementation of the Stormont House Agreement in full in 100 days. The Stormont House Agreement includes commitments to independent investigations, a pension for the injured and a mental trauma service. By March – within the 100 days – the SHA was torn up in blatant bad faith, while the pandemic raged. The British government hasn’t even bothered with reporting to the European Court on Human Rights regarding their obligations to victims this year.

There was a commitment to ensuring that Brexit would have special arrangements in the north and that the northern executive would have representation in the Treaty negotiations. None of that has materialised and the threat of a no deal looms large again, only this time without the scrutiny.

This is a government that cares nothing for truth. It will evade accountability in all matters, gaslighting the rest of us as unreasonable if we ask questions. There are tens of thousands dead from Covid-19 in England, many of whom might have lived with a different leader in place.

Systemic lack of accountability will obscure that truth. This post-truth era has devastating implications, and it is only beginning.

The #dominiccummings affair is not going to go away like the PM would like. With the stream of spin and lies, DC is eroding trust in the UK Govs public health messaging. That is why this is an issue of the utmost importance. This is a question of leadership for @BorisJohnson. pic.twitter.com/Nm3Z20glIX