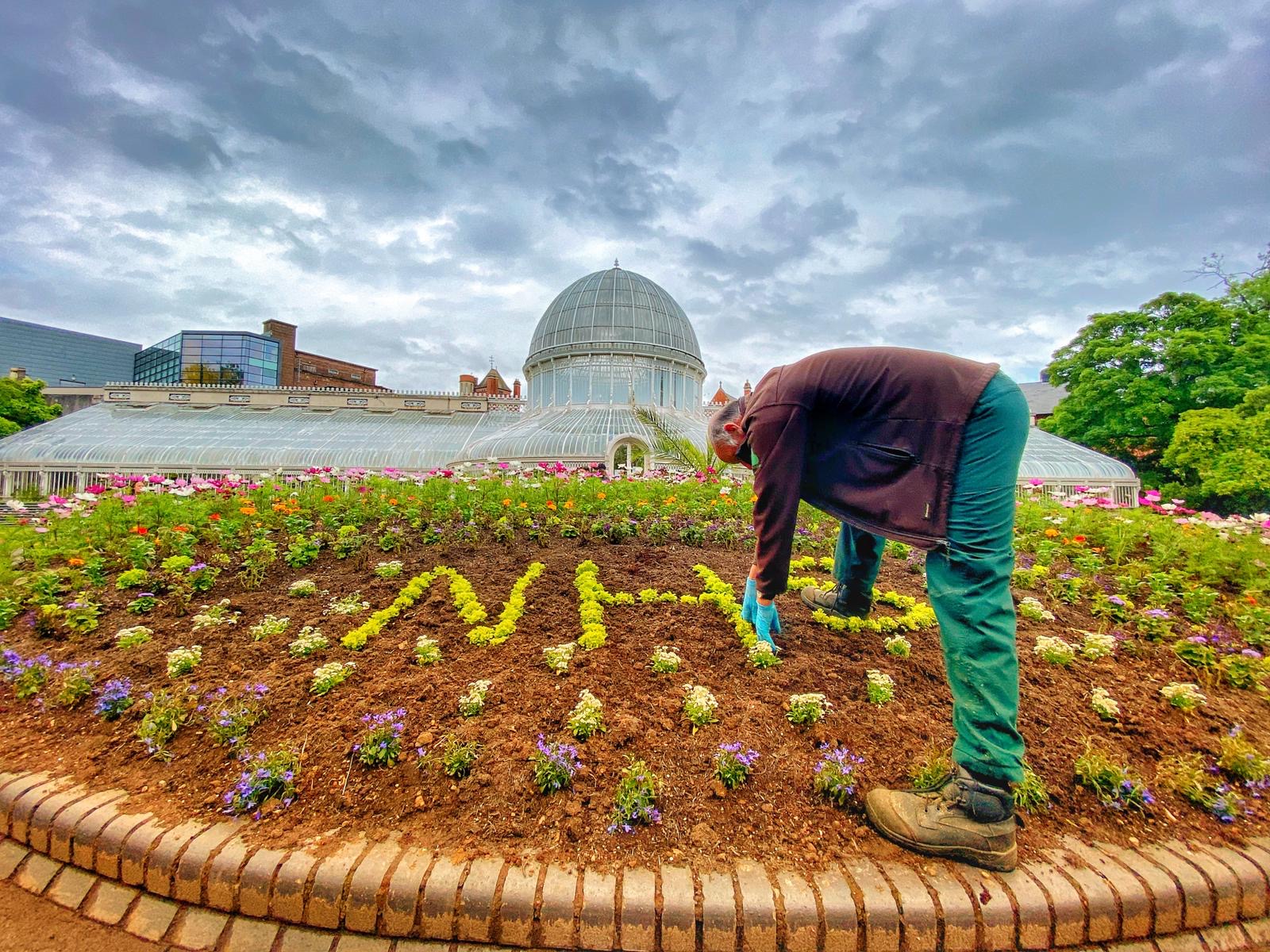 BOTANIC TRIBUTE: A Council worker plants a tribute to our health service heroes in front of the Palm House in Botanic Gardens

We have begun to reflect on the pandemic and what could have been done better, especially in our care homes — though politicians are keen to say that it is too soon.

Would 1 August 1916 have been too soon to reflect on the poor leadership at the Battle of the Somme when so many perished?

We need a mid-course correction to save more perishing on the rocks of a second wave of this insidious but systemic infection when government has still not taken WHO advice to treat it more seriously.

We have seen the tragedy of Betty Donnelly on BBC Spotlight and heard Dr Cathy Jack at the RVH asking for more resources.

Drive-thru is the flavour of the month: if you can drive or have a vehicle, you can get tested.

And as for Maternity Units not reopening — such as Coleraine — have we learned anything?

We learned last week of the crucial date of 12 March when NI Chief Scientific Advisor Ian Young was not able to speak up for us at SAGE, because he was ill, and say that we were a place apart and had to go our separate way with the South.

On Thursday of this week the Stormont Health Committee heard from the trade unions (see video of proceedings above) of those who have been essential and vital workers for our health and social services. Briefing the Committee were Ann Speed, UNISON, Clare Ronald, NICTU, Karen Murray, RCM, Tanya  Killen NIPSA  and John Patrick Clayton of UNISON.

Ann Speed explained that they were seeking partnership after the austerity of the nurses strike  particularly with RQIA and the Public Health Agency. Covid has underlined inequalities in health, she reminded MLAs.

The Chair asked if the trade unions had been consulted about the Rapid Learning initiative under the Chief Nursing Officer to learn about the pandemic but they had not. Ann Speed hoped that commissioning would procede  in a public health mode. Colin McGrath (SDLP) said  we had had lots of reports  and listed the bureaucracy of our small health services but he perceived little in the way of action. Karen Murray from Royal College of Midwives was concerned about maternity units which might not reopen and the priority given to Maternity and Child health Services.

Ann Speed mentioned the debt to Black Asian and Minority Ethnic frontline workers and the problems with personal protection equipment.

Tanya Killen addressed the contribution of social care workers and Rita Devlin the lack of consultation over a pilot to get them to live in or in bio-friendly hotels nearby. Alan Chambers (UUP) asked about the frequency of testing in care homes.

Absolutly - we must find out how and why our care homes bore the brunt of this pandemic. There must be reasons! https://t.co/XEMoaZFzff

The Chief Pharmaceutical Officer briefed on a Legislative Consent Motion in relation to Medicines and the European Union and there was much discussion which was pushed to a tied vote in which the committee would not express an opinion to the Assembly; medicines post any Brexit  were a concern. Some other regulations were considered.

Minister Swann is due to return to the Committee on Monday 22 June.

Footnote: Prof Ferguson formerly of SAGE has opined if quarantine had been introduced ealier some 25,000 lives could have been saved in the UK.

Richard Pengelly, Permanent Secretary of the Department of Health, is reported in the Irish News to have told hospitals on 25 April to discharge patients to care homes even if they were positive for Covid-2 virus.

There should now be a formal public judicial inquiry into how the pandemic and deaths in care homes to start at the beginning of the legal term. There should be no whitewash at the white house.