OPINION: DUP deniers failing to face up to links between climate change and farming 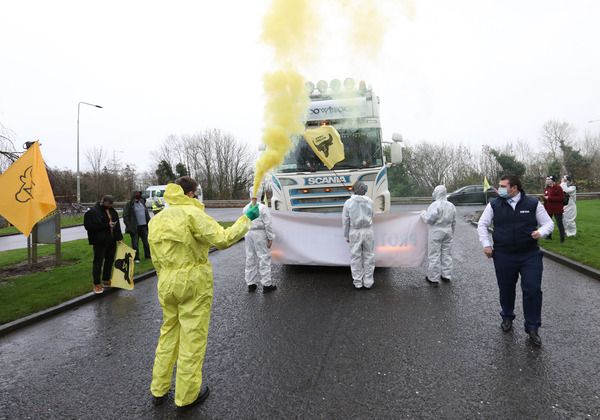 It is no surprise to find a close relationship between creationism and climate change denial. If as a denier you are wrong and planet earth becomes uninhabitable then, as a creationist, you know that God can make another one in seven days.

Sick jokes aside, the climate emergency is not taken seriously enough by the current minister with responsibility for the environment and former leader of the DUP, Edwin Poots. This time last year, the Assembly debated a motion which called for the urgent introduction of a climate change act, having declared a “climate emergency” in February 2020. In that debate Sinn Féin MLA Dr Caoimhe Archibald called for climate action “based on social justice” – “this is too crucial a time to dither and delay”.

But Edwin Poots responded by saying, “we shouldn’t be using language such as emergency or crisis”. He questioned the science by arguing that “the methane produced by cows has had relatively little impact on the environment”, even though the Intergovernmental Panel on Climate Change says that methane has more than 80 times the global-warming potential of carbon dioxide. And that’s only about what comes out the front end.

Frustrated by continuing delays, Green Party MLA Clare Bailey introduced a private member’s bill in May of this year which is supported by all parties except the DUP. Its targets are also opposed by the Ulster Farmers’ Union. Poots described it as a “Disneyworld Bill” and has now produced his own bill with lower targets and longer timeframes, reflecting his memorandum of understanding with ‘Ulster’ farmers.

The new DUP leader Jeffrey Donaldson is less outspoken on climate change but is part of the Westminster networks of pro-Brexit climate science deniers. He was a member of the All Party Parliamentary Group on Unconventional Gas and Oil which was supported by donations from fracking interests such as Cuadrilla and INEOS. That group ceased to function after the 2017 general election.

A more vocal advocate of climate science denial is fellow DUP member Sammy Wilson MP.  He was environment minister in 2009 when the then Labour Westminster government was sponsoring TV adverts calling people to “Act on CO2”.

Wilson banned these ads in the North on the grounds they were “green propaganda”. Later, he was part of a small group of MPs at Westminster that sought to repeal Labour’s 2008 Climate Change Act. More recently, as a fan of Trump, Wilson welcomed the US withdrawal from the Paris Accord as “very wise”. His latest attack on decarbonisation was to describe the “climate zealots’ diet” as comprising “insect larva, maggots, seaweed and algae”. He delights in providing free publicity for KFC and Big Macs when giving interviews.

Then there was RHI – the renewable heat incentive scheme – a policy that was 98 per cent word-for-word copied from the British legislation. The idea of this EU-driven 'green energy' scheme was to subsidise businesses to replace fossil fuel-based heating systems with so-called renewables, in this case wood pellets. Whether burning wood pellets, some of which are transported across the Atlantic, results in significantly lower overall carbon emissions is a debate for another day.

The subsequent RHI inquiry may have proved fascinating to some for its revelations of incompetence, system gaming, corporate welfare, greed and shady dealing, but it focused almost entirely on money management and civil service conduct. There was no environmental thread to the inquiry.

The RHI policy came under Arlene Foster who was DUP minister for Enterprise Trade and Investment for seven years and who didn’t read the piece of legislation she introduced, especially the 100 words that were different from the British law. The RHI scheme was enthusiastically embraced, not so much for its green credentials, but because it was designed, without cost controls, in such a way that the more you burned the more you earned in subsidy.

Some officials advised that the scheme would draw additional money from London – which it didn’t. There were warnings right from the start, and even before the scheme was launched, that the funding model was flawed.

The subsequent RHI inquiry may have proved fascinating to some for its revelations of incompetence, system gaming, corporate welfare, greed and shady dealing, but it focused almost entirely on money management and civil service conduct. There was no environmental thread to the inquiry. We learnt nothing about what the policy was supposed to achieve by way of reduced greenhouse gas emissions or what it did to boost the overall production of meat, notably chicken.

HOW DAMAGING WAS RHI TO ENVIRONMENT?

RHI was a scheme that was intended to reduce emissions but did quite the opposite. How damaging was it? By how much was the North’s carbon footprint increased? The inquiry was silent. But we do know that agriculture-related emissions went up from 5,098 kilotonnes of CO2 equivalent in 2009 to 5,594 in 2019, now 26 per cent of the total (up from 22). Or, if we add in land use and forestry, we are talking about 38 per cent of total emissions. Agriculture is the biggest single source of emissions in the North, well ahead of transport. How appropriate to have a DUP minister in charge.

Growth of the meat industry in recent years has left us with a massive shit problem. And not just literal shit but a shitty atmosphere. Intensive agriculture in the North produces so much excrement that experts are now advising that over one third of it may need to be exported.  Even this is a secondary problem. The biggest emergency – and Minister Poots knows it – is pollution from ammonia, a gas that is generated from slurry tanks and excrement spread on land. Ammonia emissions increased by 20 per cent between 2010 and 2018.

Ammonia reacts with other airborne pollutants to produce fine particles which cause breathing difficulties and premature deaths. It dissolves, converts to nitrogen and runs off into streams, rivers and lakes. Another trouble with ammonia is that it destroys sensitive lichens and mosses, degrading peatlands and bogs which are important carbon sinks.

In 2017 it was estimated that ten per cent of the South’s ammonia emissions came from pig and poultry farming compared to 20 per cent in the North. Or if you prefer a UK comparison, Northern Ireland accounts for 12 per cent of total UK ammonia emissions. Cattle farming produces about three-quarters of the ammonia emissions across Ireland. It may be more difficult to monitor all-Ireland’s emissions in future as the UK is no longer part of the Natura 2000 EU framework.

According to the Environmental Justice Network Ireland, 95 per cent of the North’s lakes now fail Water Directive quality standards. Most of the North’s land mass has levels  of nitrogen at which “significant and irreparable ecological damage occurs”.

So here’s a suggestion for the Climate Bill: Introduce the crime of ‘ecocide’ as proposed recently for the International Criminal Court by Philippe Sands and others. If accepted, ecocide will join war crimes, crimes against humanity, genocide and the crime of aggression that were used to prosecute Nazis in the 1940s. What is ecocide? It is “unlawful or wanton acts committed with knowledge that there is a substantial likelihood of severe and widespread or long-term damage to the environment being caused by those acts”. Creationism will not be an acceptable defence.