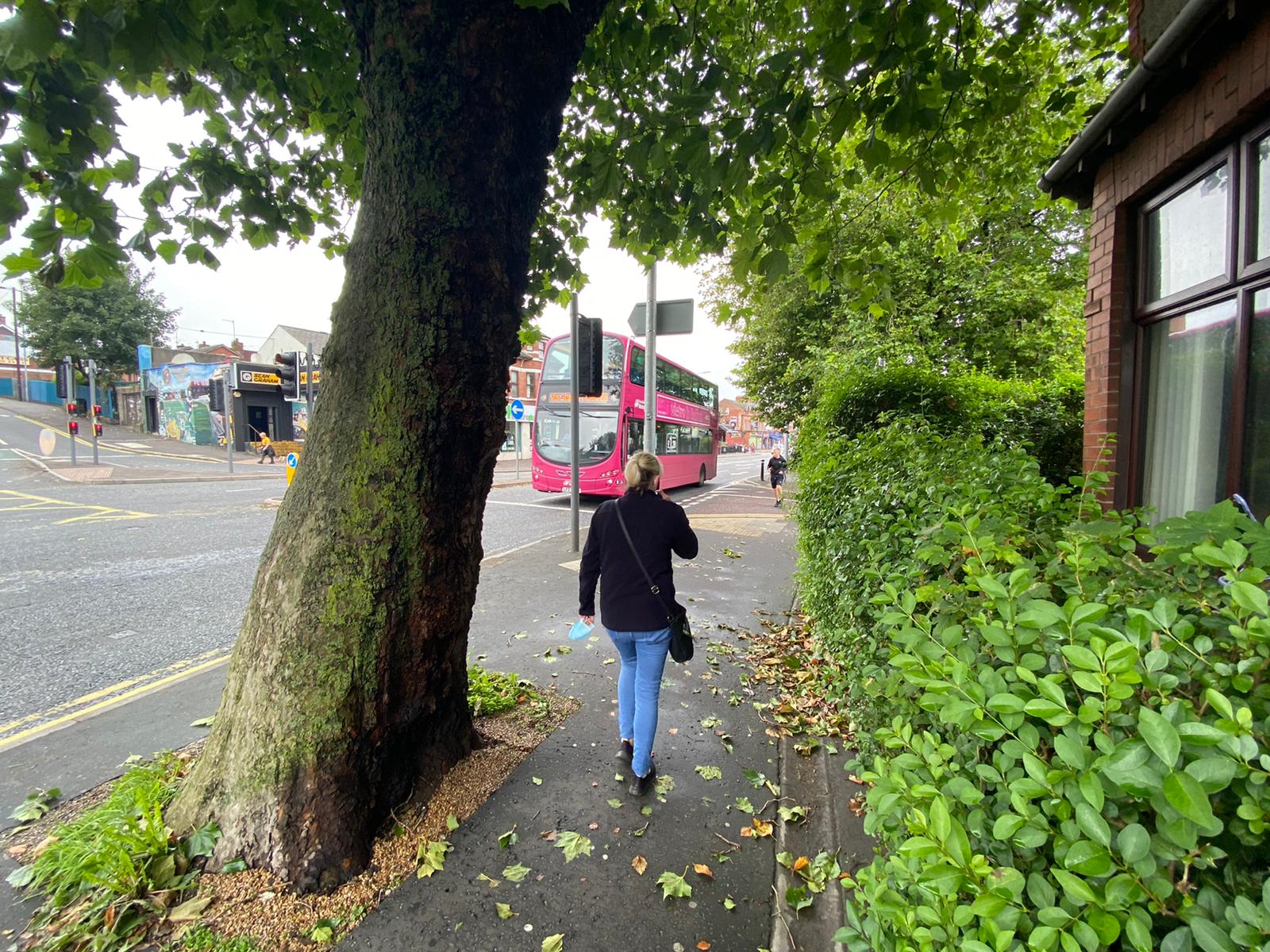 LIVING HISTORY: One of the trees near James Connolly's Falls Road home Photo by Thomas McMullen

I USED to have an old hard-backed copy of Nora Connolly O’Brien’s ‘Portrait Of A Rebel Father’. This wonderful account of James Connolly’s life, as recalled by his daughter, is a must-read for followers of the great man. I foolishly lent my copy to a comrade and that is the last I saw of it. But that’s another story.

Áras UÍ Chonghaile has an edition in their wonderful library. If you want to know more about James why not call into Áras Uí Chonghaile – the James Connolly Centre, 374 Falls Road – a few hundred metres from Connolly’s home. It’s an amazing account of Connolly’s life and times and death.

In my copy of ‘Portrait Of A Rebel Father’ – the one that was stolen from me – there is a photo of some of the Connolly children outside their family home at No.1 Glenalina Terrace opposite the City Cemetery on the Falls Road. They moved there from Dublin in May 1911. Three of the six Connolly children can be seen standing outside their front door beside a young tree. Sadly, the tree outside the Connolly home is no longer there but the others are. Including two outside Áras Ui Chonghaile.

In a biography of her father, another of Connolly’s daughters, Ina Connolly-Heron, recalls the family arriving in Belfast where her father was taking up a position as Belfast Branch Secretary and Ulster Organiser of the Irish Transport and General Workers Union.

Ina writes: “Our destination was near the City Cemetery...  We were very pleased with our surroundings: big green fields lay at the backdoor – bog meadows, they were called.”

For years I believed that the trees that had been planted along that stretch of the Falls Road are the same ones that are there today. Regular readers will know that this column doesn’t spoof. I liked the notion that these trees would have seen Connolly walking along the road as he went about his revolutionary work. So a few weeks ago I asked my good friend and lifelong leader Councillor Seanna Walsh to make enquiries of Belfast City Hall.

A massive thank you to renowned artist @jimfitzpatrick on sending his wonderful portraits of James Connolly & Jim Larkin.

Available to view now at our Connolly Library pic.twitter.com/8wf3Aql7zY

He did so with his usual diligence. Back came the word. “These trees were planted in 1903.” So my hunch about the trees along that stretch of the Falls Road is vindicated. I feel like Detective Columbo successfully concluding an investigation. No more will I be accused of being like Inspector Clouseau by Ted and some of my less informed detractors when I credit these trees as silent, noble witnesses to James Connolly’s life in our community.

These trees would have seen him and his wife Lillie and their six children taking up residence in Glenalina Terrace. They would have seen all the comings and goings in the build-up to the Rising. Did Seán Mac Diarmada visit there when he lived in Belfast? Or the Countess? She and Bulmer Hobson founded Na Fianna hÉireann and rented a hall in the Rock Streets across from the Connolly residence. Did Pearse ever call when he was in Belfast? Or Roger Casement? Old Tom Clarke? Winifred Carney would certainly have been a frequent visitor. The trees would have watched Connolly departing for Dublin in 1916. If only trees could talk.

They have been observers of many events in their lifetimes. From the Rising to Partition to the hunger strikes to the Good Friday Agreement and all the thousands of marches and rallies and demos and funerals and shootings and explosions and Féile an Phobail carnivals. All the good, sad, angry, happy, proud, confusing events of their time. That’s what Witness Trees do. They stand witness and provide connections to times outside of our mere human lifespan.

For example, a Dutch artist, Theodore Maas, was present at the Battle of the Boyne in 1690. 2000 died that day. Maas captured the carnage in a series of drawings. In the middle of the battlefield and recorded by Maas stands a majestic oak tree. It is there yet. It’s called the Mighty Battle Oak. It is over 500 years old.

The oldest tree in Ireland is in County Fermanagh. It is a yew. Like another yew in Maynooth – the Silken Thomas tree – it is over 700 years old. An oak tree in Belvoir Park Forest is 500 years old. It was here when Belfast was a wee village.

We Irish have a long relationship with trees. Six thousand years ago native woods of oak, elm, birch, ash, pine, hazel and alders were plentiful. By 1900 only one per cent survived the ravages of our colonisers.

Native trees are embedded in our culture. The ancient Irish lived in harmony with nature. Trees were of great spiritual value to them. They were sacred. Many were used as protection against evil. Others are associated with holy places. Or fairies. Holy wells. Thirteen thousand Irish townland names mention trees. Many of these ancient pagan groves were colonised by the Christians. But their old names persist. Sometimes in a combination of the Irish ‘Cill’ – Church – with tree names.

So our Falls Road Witness Trees are not on their own. They are survivors. Incidentally, apart from the tree outside 1 Glenalina Terrace I have a vague recollection that at least one of the other trees close to Saint John’s Chapel was cut down in an act of subversive stupidity some time ago.

And finally, all of this came into my head recently when I finished a new book of short stories to be published next year. Its name is The Witness Tree. More of that anon.
In the meantime, if you pass our Falls Road Witness Trees salute them. They knew James Connolly. And he knew them.