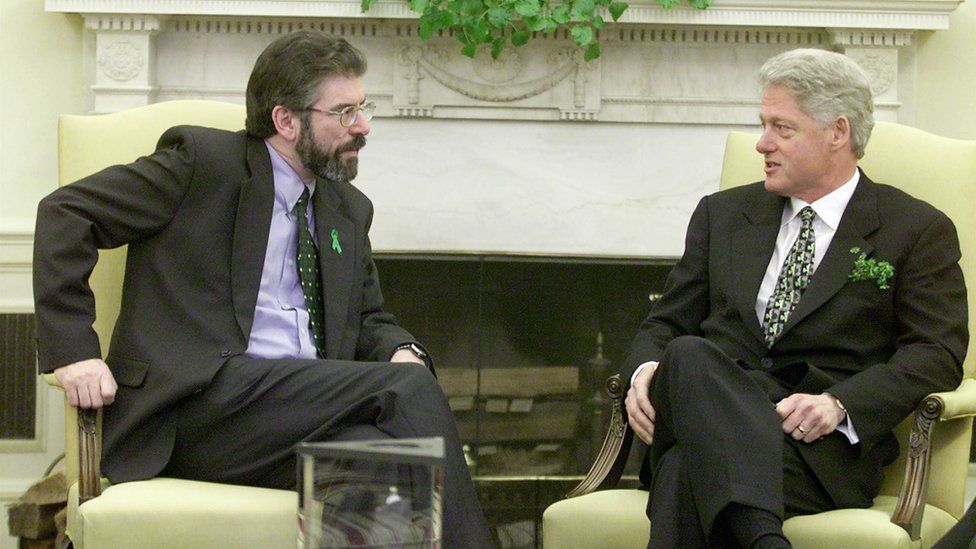 Among those who participated in the US conferences were US Senator Chuck Schumer and Congress member Eliot Engel. There were messages of support from many other public officials and representatives.  A wide range of Irish American organisations attended both conferences and in the intervening years interest in the issue of Irish unity has grown.

As part of this process and despite the restrictions imposed due to the Coronavirus, this Thursday evening Friends of Sinn Fein in the USA is hosting a discussion between mise agus Joe Crowley.

The forum will be streamed on the Friends of Sinn Féin Facebook and will be moderated by Professor Christine Kinealy. It’s due to be broadcast at 7pm New York time or midnight our time. If you’re interested you can sign up for it at here.

The conversation will focus on the Good Friday Agreement and its commitment to a referendum on Irish unity. How do we achieve the referendum? Will the Irish government hold a forum to discuss Irish unity? How does the ongoing crisis created by Brexit impact on all of this? What are the next steps? What is the role of Irish America? And how can Irish America help?

For over 200 years the Irish diaspora has played a hugely important role in the long struggle for Irish freedom and independence.

I have travelled many times to the USA in the last quarter of a century. On those visits I have met with Irish American organisations and activists and have stood at the gravesides of many Irish republicans who died in exile there. They never gave up hope that Ireland would be free. I have also visited the memorials to the tens of thousands who died in the coffin ships and in the fever camps during An Gorta Mór – the Great Hunger.

Those who fled Ireland were seeking a new life away from the poverty and hunger, discrimination and oppression that was the daily experience of most Irish people under British rule. Like many other nationalities fleeing to the ‘New World’ – an Oilean Ur, the New Island – they brought with them to the USA our language and music, our dance and literature and our politics. Those who fled the Great Hunger in the 1840s helped to found, then fund, arm and train the Irish Republican Brotherhood – the Fenian Movement. A few short years later they were giving money to ex-Fenian Michael Davitt’s Land League, which successfully demanded fundamental changes to the ownership and distribution of land.

The IRB played a pivotal role in the years leading up to the 1916 Rising. The Proclamation explicitly references the support of Irish America: “... supported by her exiled children in America and by gallant allies in Europe, but relying in the first on her own strength, she strikes in full confidence of victory.”

In the 1970s Irish America supported oppressed communities in the north. Many children were brought to the USA on holidays designed to provide relief from the reality of conflict and British military occupation.


In the 1980s Irish America was in the frontline of the efforts to end structured political and religious discrimination in employment through the MacBride Principles campaign. Irish America also successfully raised justice issues like the Birmingham 6 and the Guildford 4, plastic bullets and internment and the conditions in the H Blocks.

But it was with the development of the peace process that Irish America and others in the Irish diaspora around the globe really came into their own. The decision by President Bill Clinton to become involved in the search for peace was down to the valiant efforts of Irish Americans like Niall O’Dowd and Bill Flynn, Bruce Morrison and Chuck Feeney and others, and groups like Noraid and Clann na Gael.

The goal of Irish unity remains at the heart of everything Sinn Féin does. Whatever the political crisis of the moment the central theme of every visit by a Sinn Féin leader to the USA is Irish Unity.

Clearly times are changing. The adverse impact of partition; the threat to the two economies on the island of Ireland from Brexit; and the dangers Brexit poses to the Good Friday Agreement, and especially its human rights principles, have significantly increased support for, and interest in, holding a referendum on Irish unity. This is a fundamental part of the Good Friday Agreement. It is now a daily topic of political debate.

The Covid-19 crisis has also focused attention on the difficulties in managing the health needs of the Irish people when we have two health services on a small island.

The Irish government has a duty and a constitutional obligation to make preparations for unity. It needs to encourage the debate through a process of inclusive dialogue and to persuade those – unionists, nationalists and others – who have reservations about unity  that Irish unity makes sense for them, for their families and for the future.

Of course the leaderships of Fianna Fáil and Fine Gael and the Irish establishment are deeply partitionist. They enjoy the power which a partitioned Ireland has given them. They will not easily give up that power. If they succeed in forming a government at this time it is certain that they will pay only lip service to their constitutional obligation to promote the unity of the people of this island and to uphold and implement the Good Friday Agreement.


That’s where we – and all the other United Irelanders – come in. We need to campaign for the Irish government to ensure the full implementation of the Good Friday Agreement, including the all-island institutions, establish a Joint Oireachtas Committee on Irish Unity; set up an all-island representative Citizens’ Assembly or appropriate forum to discuss and plan for Irish unity; publish a White Paper on Irish unity; and it must secure a referendum, north and south, on Irish unity as permitted under the Good Friday Agreement.

Planning for Irish unity is primarily, though not exclusively, the responsibility of the Irish government. That process should begin now. I believe a referendum on Irish unity is achievable and winnable.

It’s time to set a date for the referendum and to let the people have their say. As we work to achieve these objectives we need the solidarity and active support of Irish America.

So on June 4 Irish Americans will have the opportunity to engage in this debate by logging on to the Friends of Sinn Féin Facebook and signing up for the event. But wherever you are in the world, including here in Ireland, why not also be part of the conversation about planning for and winning the referendum on Irish unity and shaping Ireland’s future? This is no longer an aspiration. The unity of the people of the island of Ireland and an end to the union with Britain is now a do-able project.

The newsreel below is from Gerry Adams first visit to the USA to promote the peace process in January 1994. President Bill Clinton facilitated a 48-hour-visa for the Sinn Féin leader in order to encourage moves towards an IRA ceasefire which did follow in August 1994.