OPINION - JUDE COLLINS: My advice to parents worried about their children's homeschooling: Chill 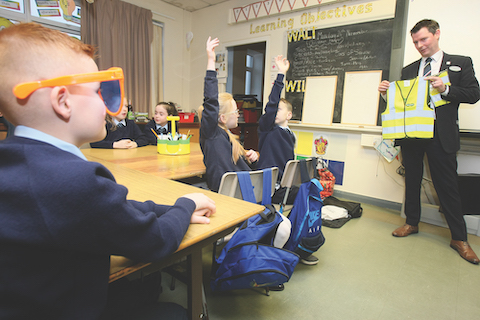 BACK WHEN CHILDREN WENT TO SCHOOL: Matthew McKenny Ophthalmic Director at Specsavers (Park Centre) visits the primary 5 pupils of Good Shepherd Primary School to talk about eye health and to donate Hi Vis vests for the pupils to get to school safely during the winter months.
SO – how’s your lockdown going? Assuming you’re not one of those brave men and women who are out there working as shop assistants, check-out people, food-supply drivers, health workers of all kinds.

The rest of us are at home, on our own or with our partner or with our family. And it has been interesting to note the different ways people view this unique time.

Take the government’s point of view. They keep presenting the perils of Covid-19 as a war, or at least a physical contest. You’ll remember Johnson (don’t EVER call him ‘Boris’ – it’s just too chummy for such a self-regarding Tory toff) standing on the steps of No.10 Downing Street and declaring that if the virus were a person, we must grapple with it, force it to the ground and into submission. And if you’ve been following the movements of Queen Elizabeth II, you’ll know that besides decamping pretty sharpish to Windsor Castle, she has been drawing parallels between VE Day, which marked the end of World War II and the courageous response to Covid-19. This, she intimated, is war.

If she’s right, it’s my kind of war: no marching, no guns, no bombs. A decent supply of food, the comfort of your own home, and of course Netflix as well as the dozens of other channels on your TV.  War is hell, they always say. Our house can be a tense place, but hell? Hardly that.

If you’re one of the many parents who have school-age children, you’re probably worrying about their education – all those classes they’re missing. If so, stop. Worry if you want to about their coverage of the course they’ve been told to study, worry about them not having the constant moral support and company of other young people; but don’t worry about their education. Because studying for exams and passing them is education only in the opinion only of those who don’t know what education is about.

You don’t believe me?  Then ask yourself when did algebra last play a significant role in your life. You know, the old a + b -c squared to the power of 9. Or how often you’ve found it handy to be able to work out where Mr Jones lives, if he lives four streets over from Mr Smith and there are 28 odd numbers on the street next to Mr Smith and two up from Mr Jones’s street which is a cul-de-sac.…Or maybe you’ve really felt enriched by doing experiments in a science lab, where mixing a bunch of stuff and heating it under the bunsen burner (they do still have these, don’t they?) means the blue litmus paper turned red after you added three grams of nitrogen-oxide into the test tube and stirred …No, wait. That’s Home Economics or Domestic Science or whatever they’re calling it these days. Which actually is of some use.

The thing with schools is that the teacher has to keep all the pupils in her/his class more or less in lock-step as they trudge through the course. I once got a note from a primary school teacher telling me that my daughter must do the same as the rest of the class and read up to page 15  of the reading book, then stop. No reading ahead. This, you understand, in a curriculum that was supposed to be teaching her to read. The truth is, the education system is a series of carefully-constructed hoops through which pupils – all together now, children – must jump. If they don’t jump gracefully enough, they’ll not get a good enough mark, and that means they’re not fit  to move on to the next set of hoops.

What I’m getting at is, all of us, but young people particularly, are learning all the time. They can’t help it. The weeks they’ve spent with you, and may go on spending with you, will teach them as it’s teaching us about the world, about what matters in life, about the amazing thing we call Nature. And we won’t forget it and neither will they.

When I think back on all the crap I learnt in high school - It’s a wonder I can think at all.