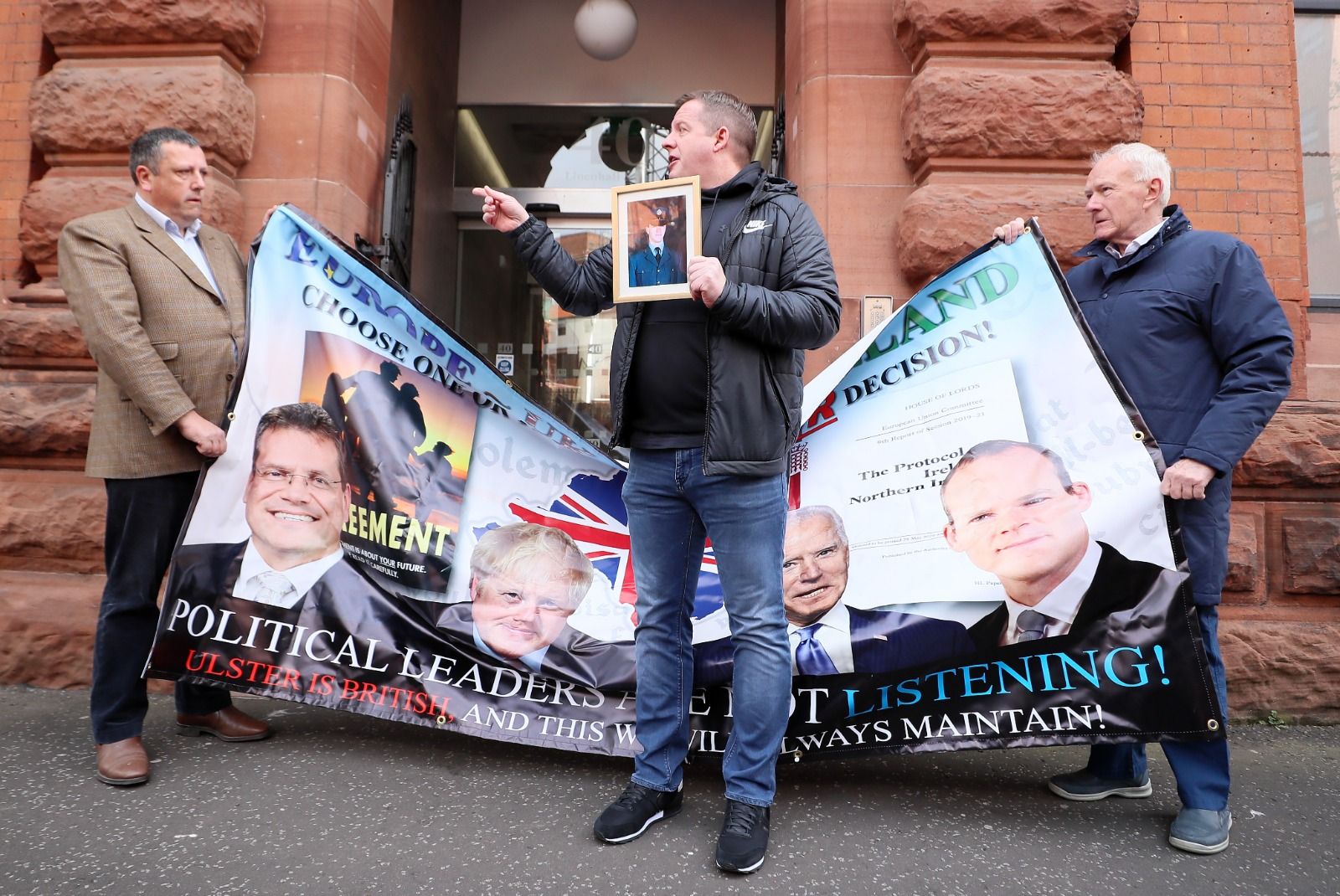 PROTESTING THE PROTESTERS: Gareth McCord, whose brother Raymond was shot dead by the UVF in 1997, disrupts a protest by David Campbell and David McNarry of the Loyalist Communities Council outside the offices of the Irish Secretariat yesterday.

If there is just one word that sums up the goings on within unionism and loyalism at the moment, it has to be ‘incoherence’. The existential crisis of unionism spews mixed messages about policing, real and lesser lawbreakers, the meaning of the United Kingdom, and even democracy itself.

The current crisis is on a par with the 1974 Ulster Workers’ Council strike and the days of the Anglo-Irish Agreement, according to DUP party chair of 20 years standing, Lord Morrow. Peter Robinson agrees. It is so serious that all the leaders of unionism have joined with Baroness Hoey and former Brexit Party MEP, Ben Habib, in a legal action against Prime Minister Johnson.

When a govt breaks its promises and endangers the country, people must act.
Join us in protecting Northern Ireland and our union.

Please put your name behind our legal action: https://t.co/xsl1l8c8tw pic.twitter.com/Iv8ilUeiav

Habib is driving the case which is “to ensure respect for the Act of Union 1800 and the Belfast Agreement”. It is listed for the High Court in Belfast for 13 and 18 of May.

As the richest MEP on record – having declared just short of £1 million in annual earnings from his property company – one might have thought that this was being funded by Habib himself, with a certain unionist party chipping in from the leftovers of Brexit funding, but no. The applicants are using crowd funding to cover the case, with a target of £150,000.

At the time of writing, only £54,500 had been raised from 980 pledgers, with just three days to go. About a third of these have added comments which, interestingly, are peppered with anti-DUP remarks. Imagine: you donate to support a legal action for which the leader of the DUP is one of the principal complainants, and you add a comment such as “Arlene Foster, Time to Go” or “ARLENE FOSTER – LUNDY”. Wrong petition, guys!

This ability to be both for and against something is part and parcel of current unionist brain fog. The case itself is against Johnson for taking the decision to agree to the Ireland/Northern Ireland Protocol. Fine, but having identified the British Prime Minister as the one responsible for the Protocol, why blame everyone else? Why blame the Irish government and non-unionist parties in the North? Why describe the Protocol as a “window of opportunity” one minute, and demand its total abolition the next?

The North South Ministerial Council was always a target for obstructive and petty protest – DUP non-attendance in recent weeks is just the latest example. Not that the British and Irish governments have set a shining example with their failure to convene routine meetings of the British-Irish Intergovernmental Conference – with no meetings at all between 2007 and 2018. Still no Bill of Rights. Still no Acht na Gaeilge. Still no abortion services because of a choosey attitude towards the bits of UK/British culture you want to be part of.

As for the riots, who is in charge exactly? Many statements on the riots are confused on cause and effect. It is decisions on the Protocol “that have caused seismic societal, economic and community breakdowns,” because “the identity of Ulster is at stake” (Paisley). Peter Robinson ploughs the same furrow: “the street violence was both predictable and predicted”. He knows that “serious societal difficulties” are grounds for suspending the Protocol (Article 16), though fails to point out that the Protocol provides for temporary suspension only.

While the violence is condemned, Paisley seems to know that there will be “a continuing downward spiral” unless the Protocol is stood down by invoking Article 16. How does he know the riots will stop at that point?

What does the LCC itself think? Nothing to see here: none of its associated groups “have been involved either directly or indirectly in the violence witnessed in recent days” (9 April). In the same breath, the LCC called for protests/riots to be cancelled after the death of Prince Philip, as if it was in command. Setting aside reports that the UVF in Carrickfergus was “making lists of people they suspect of being Catholics, or living with Catholics”, it’s a strange world in which belief in the monarchy is reinforced both by rioting and the suspension of rioting.

If the LCC is not in charge, then it must be younger break-away splinter groups, or young people disaffected through poverty, educational disadvantage and the drugs economy who are being manipulated by others. The deprivation argument would have to show Protestants with a significantly higher poverty rate than Catholics as a starting point.

From survey evidence on household poverty in 2018/19, we know that the rate of income poverty for children from Protestant backgrounds was 21 per cent before housing costs are taken account of, and 23 per cent after housing costs. For children from Catholic backgrounds, the figures are 25 and 29 per cent respectively. In other words, the poverty rates for Catholic children are significantly higher than for Protestant children. In numerical terms 59,000 Catholic children were in income poverty compared to 32,000 Protestant children. There were a further 15,700 children in poverty from ‘other’ religions and 10,700 with ‘no religion’.

There is no satisfaction in any of the above – poverty, educational disadvantage or disruption of neighbourhoods through riots, or obstruction of governance to deny the social, cultural or economic rights of others. These are problems for all of us.

The last word on anti-Protocol strategy should go to the faceless United Unionists of Ulster group which may be no more than a Facebook page with 700 followers and access to a printing press. According to the News Letter, the UUU’s only demand is “the collapse of Stormont” and its main practice is to put up lots of large posters objecting to the Irish sea border. On Wednesday 14 April the UUU called for protests at seven locations to commence the next day at 18:00 hours. But no-one showed up at any of the designated sites. Sounds like MI5 is getting stuck in – at least, this is Billy Hutchinson’s suspicion.

So what’s it to be? Collapse Stormont? Carry on rioting till the Protocol falls? An independent 3-county ‘Ulster’? Bring back direct rule? Leave Northern Ireland? Rescue remedy from London? An incoherent menu for anyone who is still willing to be misled.