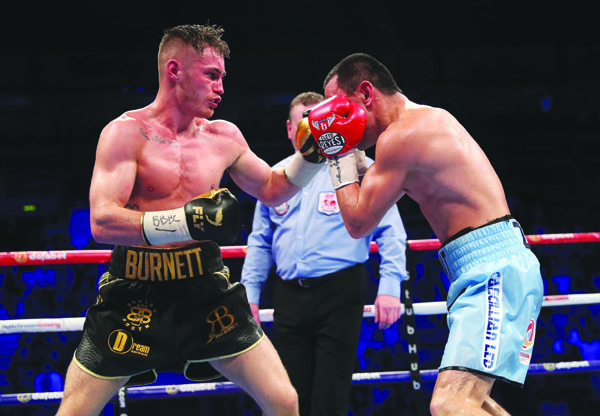 EDDIE Hearn has said there are numerous options now for Ryan Burnett following his impressive victory over Zhanat Zhakiyanov last Saturday night.
The Matchroom promoter was thrilled with how his fighter unified the IBF and WBA bantamweight titles considering he has just moved up to world level and now looks the dominant force in the division.
Burnett’s title wins have been even more impressive considering the manner of those victories, showing the ability to out-box, out-fight and out-muscle a variety of opponents and Hearn was full of praise after Saturday’s win.
“It’s scary to think how many more levels he has got to go,” he said.
“Adam Booth is so clever, they just out-foxed Zhakiyanov. The problem is that when you’re a one-dimensional fighter, there is only so much you can do. When you get shut down, you can’t adapt and what Ryan is able to do is adapt. He shut him down in the first half of the fight, then he out-boxed him, then he beat him up. He did a bit of everything.
“By the eighth round, Zhakiyanov had run out of ideas. I had Ryan winning by five rounds, some of them (scorecards) were a bit wide, but I found it hard to give Zhakiyanov rounds as Ryan was always in control. He took a few late on, but it was a convincing performance and a performance well beyond his years. To do that so easily against a world champion is very impressive.”

Profile
Next up could be a trip to the United States although Hearn is keen to build Burnett’s profile in his home city.
There were around 6,500 in attendance on Saturday, an increase of 2000 from the Haskins fight so Hearn would like to maintain that progress, but he admits it is a rather crazy situation where a fighter is being built at home in super fights rather than domestic title affairs.
“Your choices are a commercially big defence,” he outlined.
“That could come against Jamie McDonnell or Paul Butler. You can try and win another belt. (WBO champion, Zolani) Tete is there which is a tough fight. Yamanaka’s maybe reinstated as the WBC champion, we’ll see what happens there or the other option is to move up.
“We may have a mandatory to face as well against Emmanuel Rodriguez who is a good fighter or we could go up to super-bantamweight and try to win titles there.
“At 25 it’s all a bit early, but that was the mad thing about taking a unification fight. Usually you have a couple of defences and build to those fights, but he jumped in and took it straight away.”
He continued: “I don’t want to really lose the momentum here. I think if we disappeared and came back in September…. Then you have Carl (Frampton) fighting in Windsor Park in May and you don’t want to clash with that either, but he could box on the undercard of a pay-per-view card in February or March, a Joshua card or whatever.
“I have thought about doing a double header (with Katie Taylor) in New York.
“Ryan adapts his styles. He was very exciting in the Haskins fight which I thought could be a stinker then the first four or five rounds tonight weren’t as exciting as I thought they could be, but he was doing that for a reason.
“The States would love him. HBO in the last four or five rounds were loving it. They are heavily involved in the super-bantamweight division and were asking whether he would like to go and fight for the title there.”

Option
The move up in weight is an option, but Burnett doesn’t seem keen for now as defending and perhaps, adding to his bantamweight belt collection seems to be his preferred course.
Hearn reiterated the quite unique situation they are now faced with in that Burnett’s profile in his home town is based on huge fights and they must be clever in what route they take next.
“I think the move to super-bantam will come, but then at 25, you would maybe be looking for one or two more fights,” he agreed.
“It’s hard the way he’s being doing it, to do something ordinary the next time. He hasn’t had the opportunity to be built in Belfast. His first real big fight in Belfast was for the world title and his second was a unification fight. He didn’t have the British, Commonwealth and European title fights in Belfast, so it’s difficult as you are building him in mega fights without really having the profile to make the most of those fights.”