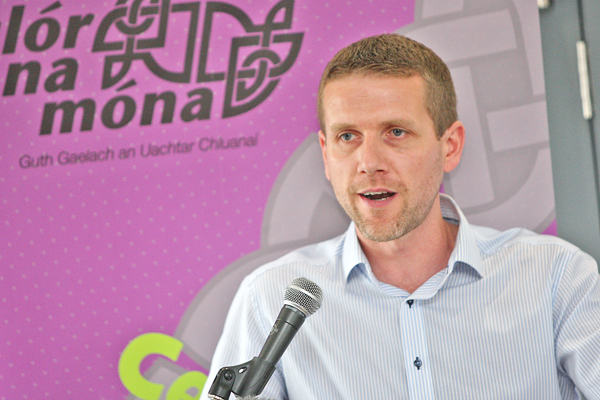 ORANGE Order leaders have fired a shot across the DUP bows with a no-holds-barred attack on the 'New Decade, New Approach' deal tabled last night by the Irish and British governments.

Previously, Order Grand Secretary Mervyn Gibson had warned the DUP that any concession on an Irish Language Act would be fiercely opposed by Orangemen.
"In contrast to the detailed list of measures to promote the Irish language, references to Ulster-Scots/Ulster-British culture are ambiguous - lacking meaningful detail or delivery mechanisms," said a statement from the Grand Lodge of Ireland.

"Indeed, many of the initiatives are merely reworking of previous undelivered commitments to our community. As British citizens living in the United Kingdom, we have a complex and multi-layered identity which in many areas is wider than simply Ulster-Scots. We remain unconvinced that the cultural traditions and identity of the Orange family will be meaningfully promoted or safeguarded by these proposal."

Earlier Conradh na Gaeilge had branded the proposals an "historic advancement" for the Irish language but ones which fell "far short" of previous government commitments by the Irish and British governments.

The deal includes a number of provisions for the language including the appointment of a Irish Language Commissioner.

Dr Niall Comer, President of Conradh na Gaeilge, said that deal was "undoubtedly historic", however, the organisation highlighted the absence of an Irish Language Act as promised in the 2006 St Andrew's Agreement.

"This legislation is undoubtedly an historic advancement for our community, and for those who wish to use the language, by providing historic official status, legal protection and an Irish language Commissioner for the first time in the history of the state," Dr Comer said.

"This has only come about as the result of a tireless, inspirational and bottom up campaign which has transformed how people here now view the language and ultimately how the state will interact with our community and shared language moving forward."

Ciarán Mac Giolla Bhéin of Conradh na Gaeilge added: "This protection comes in the form of an Irish language Bill being pasted into the GFA, independent from the other language legislation, as new, separate parts of that agreement. If passed, we will hold any new power-sharing executive fully to account on the full implementation of these proposals and will tirelessly test and expose the weaknesses and glaring omissions in the coming days, weeks and months.

"There are some huge question marks here. These proposals fall far short of the commitments made in the 2006 St Andrew’s Agreement, which promised an Irish language Act based on the Welsh legislation and does not contain provisions that are made for language in Wales or in the south, as was explicitly committed to by both Governments.

"The complete omission of visibility and signage is hugely frustrating and will undoubtedly be a source of tension and will expose major fault-lines on contested cases of signage in the coming period. However, the possibility of the delivery of signage through language standards will be rigorously and immediately tested by our community.

"The role and remit of the commissioner being left to the sign-off of OFMDFM leaves us at the whim of a veto being used against core components of the legislation and drafting and delivery of services. The use of any veto to limit, obstruct or frustrate delivery of services and rights would undoubtedly erode trust and could be potentially catastrophic for any incoming Executive.

"We welcome the adoption of recommendations included in our consultation document for the centuries long overdue repeal of the final remaining 1737 Penal Law, that will now facilitate the use of Irish in Courts; the new central translations hub; the right to use Irish in the Assembly, where it was previously sneered at and belittled, which includes a provision for simultaneous translation. Finally, the commitment to an Irish language Strategy has the potential to transform our community in the coming years.

"We will now work diligently towards testing the glaring gaps in the legislation that prevent us from playing a fair and equal role in our society. Legal advice is being sought on several of the provisions, including the ‘official status’ provision. The devil is not only in the detail of the legislation, but in the implementation of that legislation."