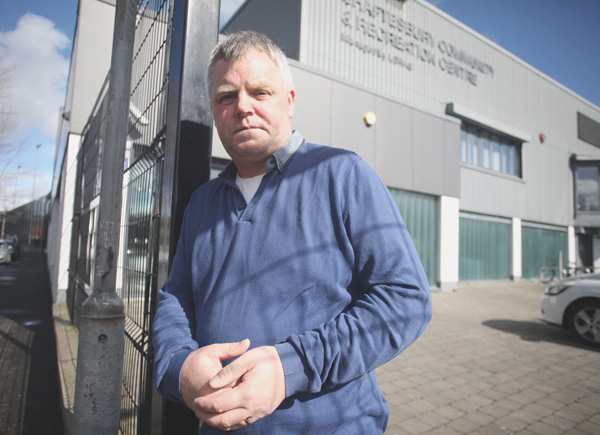 Gerard Rice of LORAG at Shaftesbury Community and Recreation Centre

ORMEAU ROAD residents have been left out in the cold by an Electoral Office decision not to hold a community registration clinic at Shaftesbury Community and Recreation Centre.

In previous years clinics were held to facilitate registration of prospective voters in the bustling lower Ormeau area. Speaking to the South Belfast News, Gerard Rice of the Lower Ormeau Residents’ Action Group (LORAG) said: “We are very disappointed that the Electoral Office has taken this decision. South Belfast is unlike other areas, we have a very high student population and we are home to a lot of people from ethnic minorities, the electoral register would need to be constantly updated to handle the influx of residents.

“In the run-up to the last election there were 186 people removed from the register in the lower Ormeau area alone, that’s not good enough. Many people have expressed the opinion that while the Electoral Office are quick to remove people from the electoral register it is another story when people are trying to return to it.”

Mr Rice added: “We also heard of people being turned away from polling stations, however once they argued their case they were told to call back later to cast their vote and so the loudest people are being allowed to vote but the quiet ones aren’t. This only adds further to a perception of unfairness and ultimately excludes the most vulnerable.”

Mr Rice has written to the Electoral Office to express his concern. In his letter he wrote: “Pre-election I was informed that an electoral registration clinic was not possible but I was provided with information on how best to advise those seeking registration.

“Many of those that followed this advice were returned to the register and were able to vote. However, others have informed us that when they arrived at the polling station they were denied the ability to vote.

South Belfast MLA Máirtín Ó Muilleoir said: "It always amazes me how easy it is to be removed from the electoral register yet how difficult it is to be included on that same register. The days of gerrymandering are long gone. What we need is the same energy and focus applied to affording people the franchise as has been devoted to denying citizens the vote.”

A spokesperson for the Electoral Office said: “A full registration service is currently available across Northern Ireland in Belfast, Newtownabbey, Omagh, Banbridge and Derry.

“Members of the public can attend at any of those five sites on any week day to receive assistance in registering to vote. The Electoral Office is still completing end of election administration following the ‘snap election’ in March and has additionally been required, in an unprecedented arrangement, to place itself in a standby position for a second potential election before the summer should that be required.

“In such circumstances it is not possible to offer any further specialist registration services outside those sites and we would encourage members of the public to check on our website for the phone numbers and details of the location for registration at our office in their own area. Maintaining a complete and accurate register remains a statutory task of the Electoral Office and I would encourage parties to contact the Electoral Office to discuss how we may be of assistance in relation to any registration events planned by them at this time.”