Over one million visitors to West Belfast this year 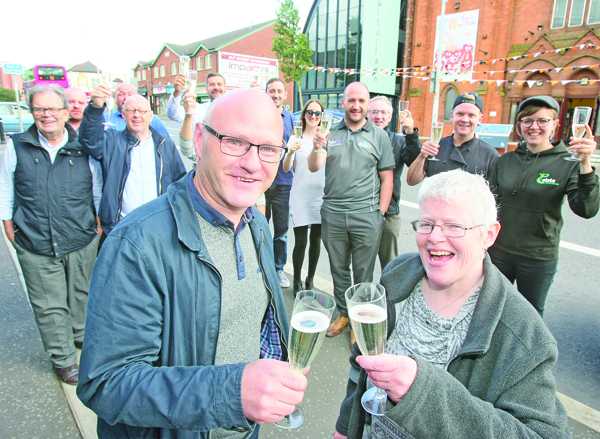 2017 is set to be a record year for tourism in West Belfast. So far this year well over one million visitors have been to some of our key tourist attractions generating millions into our local economy.

“Since 2012 with the launch of the ‘Our Time Our Place’ Campaign, Belfast is well and truly on the map for international visitors, with tourism really galvanizing and mobilising with West Belfast tourism stakeholders stepping up to the mark.”

Harry said in 2016 Fáilte Feirste Thiar noticed an increase on visitors from all over the world visiting West Belfast.

“In 2017 we have again worked closely with local tourism stakeholders, those on the frontline of engaging with tourists and we are delighted to report that the tourism numbers are pointing towards 2017 being a record year for tourism.”

In 2006 Fáilte Feirste Thiar commissioned a report to establish a baseline of visitor numbers to West Belfast. Then it was 650,000 people. Now in 2017 the numbers are well over the one million mark.

“This is excellent news for our hospitality industry with West Belfast’s only hotel, the Balmoral, having had a record summer by being full to capacity at times,” said Harry.

“Hotels usually have 70% occupancy with only 30% available at any given time, the average in Belfast now is 88% with some hotels reporting 95%. Some weekends in July and August saw hotels at 100% occupancy, it’s unheard of.”

Harry says it’s thanks to our unique tourist attractions that visitors cannot get enough of West Belfast.

“Add to that the coaches that come from all over Ireland into West Belfast on tours and again the visitor numbers go up. You also have the likes of Tony Devlin’s plays that are put on throughout the year in the Roddy’s and plays in the PD etc and again those numbers rise.

“There is a real rich and thriving art scene here in West Belfast, all these shows premiere in West Belfast and then go on to sell-out the Opera House or The Lyric. A Night With George, which is award wining and has toured all over the world, started here as did the Holy Holy Bus.”

Harry added: “What gives Belfast it’s unique edge is the offering that resides here in West Belfast. Visitors can go to similar sized industrial cities in Europe, but very few of them can boast the distinctive offering that we have here in the West of the city, underpinned by the Irish language, the Gaeltacht Quarter, Féile an Phobail, taxi drivers, a first hand political walking tour led by former combatants who are now champions of peace and a thriving hospitality industry that is facing forward.

“This is Belfast at its most daring. A big thing about our success is that we took a concentrated effort to connect our offering to Belfast’s corporate image.”

Harry assures us that just because the tourism figures are so impressive this year that doesn’t mean that he and his team will be sitting back.

“We won’t be resting on our laurels,” he said. “Coming down the line we have exciting plans to secure and increase our record visitor footfall. So how are we going to do that? We are involved in developing tourist attractions that will be of international standout significance. Leading the way is Casement Park, the James Connolly Centre, the recent development of Sportlann in the Gaeltacht Quarter at Coláiste Feirste. As well as that the review of leisure facilities has led to world class leisure centres being located in West Belfast and we also have the Falls Park/City Cemetery Masterplan.

“The number of bars, restaurants and accommodation available now in West Belfast has never been as strong or dynamic.

“The Gaeltacht Quarter is known as a customer service hotspot. We were the third place in the north to be awarded with the World Host title. Derry received it when it was the City of Culture and Titanic have also received it.

“During one week in August over 1.5 million people were clued into and engaging with the West Belfast story via Féile an Phobail and their social media campaign – West Belfast certainly has a lot to celebrate.”

A delighted MP for West Belfast, and Chair of Fáilte Feirste Thiar, Paul Maskey, said it was great to see that our visitor numbers increase year on year.

“There’s no doubt that’s down to the hardworking staff of Fáilte Feiste Thiar and the many people who work and promote our various tourist attractions,” he said.

“There’s a great offering here. One of the best offerings we have is our people. We are a very welcoming people who work hard to ensure that tourists are happy when they visit here. There’s a great service in West Belfast and it’s going from strength to strength which we welcome as it is sustaining jobs and our attractions continue to grow every year. It is definitely something to be celebrated.”