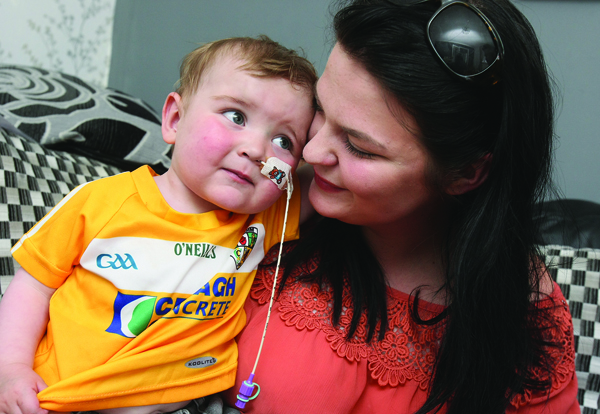 TOGETHER: Seph Ní Mhealláin holds her son Dáithí in their Ballymurphy home

THE parents of a 19-month-old Ballymurphy toddler are calling on local people to sign up to the organ donor register.
Little Dáithí Mac Gabhann does everything that a baby of his age should do. He loves laughing and walking, learning new words and he adores his doting parents.
But he needs a new heart.
During a routine 20-week scan when Dáithí’s mum Seph was pregnant, his parents were devastated to learn that their baby’s heart had not developed as it should.
Speaking to the Andersonstown News from their Ballymurphy home, Dáithí’s mum Seph Ní Mhealláin said: “We didn’t realise anything was wrong until the 20-week scan. Most people think this scan is to find out the baby’s gender but it’s also a foetal anomaly scan.
“Everything was going well until the radiographer got to the heart, I remember seeing her face falling and I realised there was a problem.
“We found out our baby had a thing called hypoplastic heart syndrome, the rest of the pregnancy was a real worry for us. We were told once Dáithí was born that he would be flying to England for surgery.”
Dáithí was born on October 21, 2016 and two days later he travelled to London via Air Ambulance for surgery. On October 25 Dáithí had his first open heart surgery – he was just four days old.
Dad Máirtín Mac Gabhann said: “Six days later he had to get the same surgery again. From the hospital’s point of view the surgery couldn’t have gone any better, but the following morning we received a phone call to say that Dáithí wasn’t responding well and we needed to get back.”
Máirtín continued: “It was really scary, we didn’t know what was going on. Dáithí’s consultant explained that he needed to go on a bypass machine to take the pressure off his wee body. They said the risk of stroke was quite high.
“We were brought into a wee room and the doctor told us that Dáithí had a battle ahead of him, the shunt in his heart didn’t quite fit and they would need to perform more surgery or we could let him ‘slip away’.
“As soon as the words ‘slip away’ were mentioned Dáithí opened his eyes, so that was it for us, there wasn’t any question, we signed the consent forms for his surgery.”
Dáithí then went for an eight-hour surgery but his parents were told there were still no guarantees. During his time in hospital Dáithí developed septicemia and a bug on his skin, both of these could have been fatal.
Máirtín said: “He started getting stronger and stronger every day and he was eventually sent home to Belfast.”
On December 16th Dáithí’s grandparents were looking after him while his parents had a much-needed night out.
“During that night Dáithí had heart failure, we walked in and we knew straight away something was wrong,” said Máirtín.
“He was brought straight into ICU, again it was a terrifying time for us. They thought he had a stroke, hospital really was his second home.”
Dáithí had further surgery at the end of February.
Máirtín said: “We were told that Dáithí had a leak in his heart and that it was so significant that they couldn’t try to fix it, they wanted to focus on putting their energy into a heart transplant for him now instead.
“For Dáithí all other medical options have now been exhausted and a donated organ is his only hope, it takes two minutes become a donor, Dáithí has signed up.
“Dáithí’s potential donated heart needs to be from a baby or a child between one and five, we know that this is a very taboo subject and something that isn’t easy to talk about.
“For parents, it may seem crazy to put their children on the NHS Organ Donor Register, but there simply aren’t enough organs around for children on the waiting list like Dáithí. We want to create awareness of why everyone, including children should become donors.
“In the long term we would love to see an opt-out system introduced in the North.”
Máirtín continued: “Dáithí got the raw end of the stick, not only does he have congenital heart disease, he has the worst possible form of it. He basically has a half working heart, the problem is with the left side, this is the side that is the most important.
“Dáithí may look fine at the minute but he will deteriorate, he needs a heart, he is a very sick boy and this is his last chance.”
To register to become an organ donor visit: www.organdonation.nhs.uk/register-to-donate/register-your-details/