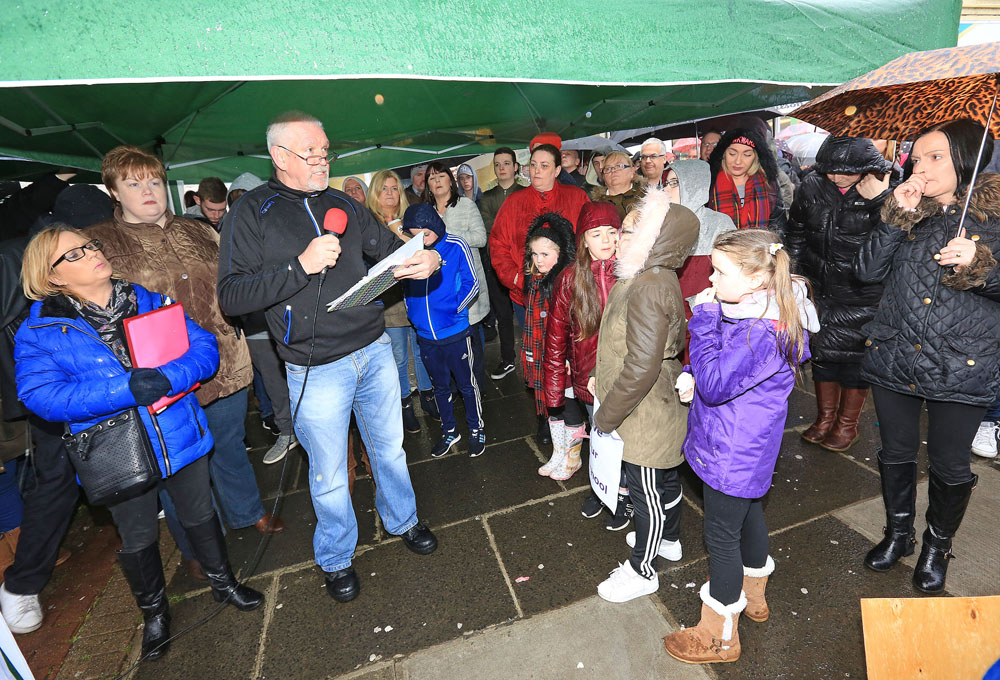 Worried parents and students braved the rain last night to protest at the way De La Salle College is currently being run.

People turned out in their droves to the rally with placards and signs in an attempt to show their anger and frustration with the current infrastructure of the school.

Gerry Carroll, the Chairman of the Concerned Parents Committee addressed the crowd saying: “The reason for this rally is to facilitate those who want to show their support to the children.

“We have met with local politicians, senior clergy, and the children’s commissioner.

“We request the principal, the two vice principals and the board of governors be stood down and for there to be a thorough and independent investigation.”

Mr. Carroll added: “I wish to state categorically that this is not a witch hunt, we understand the people we are asking to stand down are part of this community as well, we understand they are feeling the pressure of what’s happening here.”

“No one is guilty, no one has done anything wrong that can be proved so far, that’s why we want an investigation that will prove any wrongdoings.”

The Committee say their main issue is with CCMS and their lack of urgency to step in to attempt to resolve this matter.

Gerry Carroll said “CCMS must bear the brunt of responsibility for this crisis, they have let the parents, the teachers and most importantly the pupils of De La Salle College down. Their lack of urgency to try and sort any issues out is nothing short of disgraceful.

“There have been signs that things weren’t right within the school for 16 months, maybe longer.

“The Committee has received letters and emails from parents and teachers, some of them are very disturbing to us. How serious does this have to get before CCMS react?”

Ms Imelda Jordan has been put in place as the Associate Principal of De La Salle College, she spoken with parents at the school gates yesterday morning.

One worried parent said: “my son is a fourth year and three weeks ago only one of his six teachers was in along with a sub teacher. His education has been affected so much, there hasn’t been any homework, no study plan for exams, the child is lost.”

Another parents whose son is in first year said: “Everything is being taken away from these kids, I can’t remember the last time my son was sent home with homework. He is dyslexic, he needs to be educated. I don’t want my son just coasting through school, I want him to learn. Last week his English teacher took him for P.E. I don’t understand how an English teacher can teach Physical Education. It’s just not good enough.”

The parents say they will continue to protest until the current management of the school are stood down.