Patricia’s play is all set for Lyric Theatre 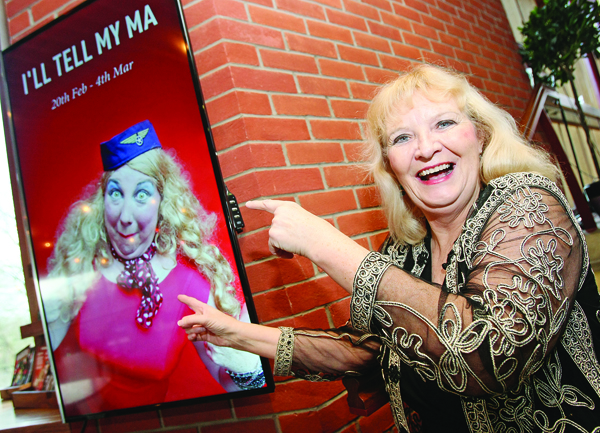 GREAT CRAIC: Patricia Gormley’s play I'll Tell My Ma will be performed at the Lyric Theatre

WEST Belfast playwright Patricia Gormley says it will be a real family affair when her one-woman penned semi-autobiographical work I’ll Tell My Ma makes its Lyric Theatre debut this month.
The production, which first entertained audiences at the Cultúrlann back in 2012, charts the adventures, highs and lows in the lives of four generations of one West Belfast family. Patricia has created a quartet of characters that include 16-year-old Davina Corrina, her mother Chelsea Marie with a tangled love life, 60-year-old Patricia and 80-year-old matriarch Granny Eileen who is trying to cope with the workings of social media as well as her free bus pass.
“I can’t believe the show is coming to the Lyric,” said Patricia, “I’m just so delighted and I have family coming from England to see it so it will be a very special occasion for us all.”
Having worked as a supervisor in Andersonstown’s Tearman Fold Patricia explained how she would put on short skits and shows for the residents and it was here that many of the characters in I’ll Tell My Ma came to life.
“I used to take creative writing courses with the residents and put on plays. The folds in West Belfast would have been privy to Bus Run and Cryin’ Air at the time which was a great way to gauge an audience’s reaction to my work at the time,” she said.
Following a sell-out run at The Mac Theatre last year Patricia said the show will be quick to find its feet on the South Belfast stage.
“Christina Nelson is playing the four parts I used to do and she is just fantastic, such a wonderful actress. To see her bring the characters, that I’ve written and played, and to put her own stamp on them is brilliant.”
The 67-year-old told the Andersonstown News that The Mac already want her second offering, Is That Too Hot? which details a day in the life of a busy Andersonstown hairdressers for their 2019 programme.
“I’m kept busy that’s for sure,” explained Patricia. “I’m working on a book at the moment as well, it’s a bit of a memoir called Letters to Michael about my younger brother who worked on the building sites across the water during the 1980’s.
“All his friends from here would write to him telling him all the biz from home and I received all of his letters after he passed away sadly from alcoholism. There is so much history and events in those letters so I’m working on that at the moment.”
With I’ll Tell My Ma’s curtain set to rise from February 20 Patricia said it’s a play that “definitely has legs”.
“It just seems to resonate with people and they always come up and tell me they can relate to all the different characters.
“I always stay back after the curtain comes down and you get all the feedback with people telling you how a certain character reminds them of someone in their family. It’s always fantastic to hear that.
“Tickets are going great at the minute and this really is another chapter in its life bringing it to the Lyric.”
I’ll Tell My Ma runs at the Lyric Theatre from February 20 until March 4. For ticket details contact the Lyric box office on 90 381081 or www.lyrictheatre.co.uk