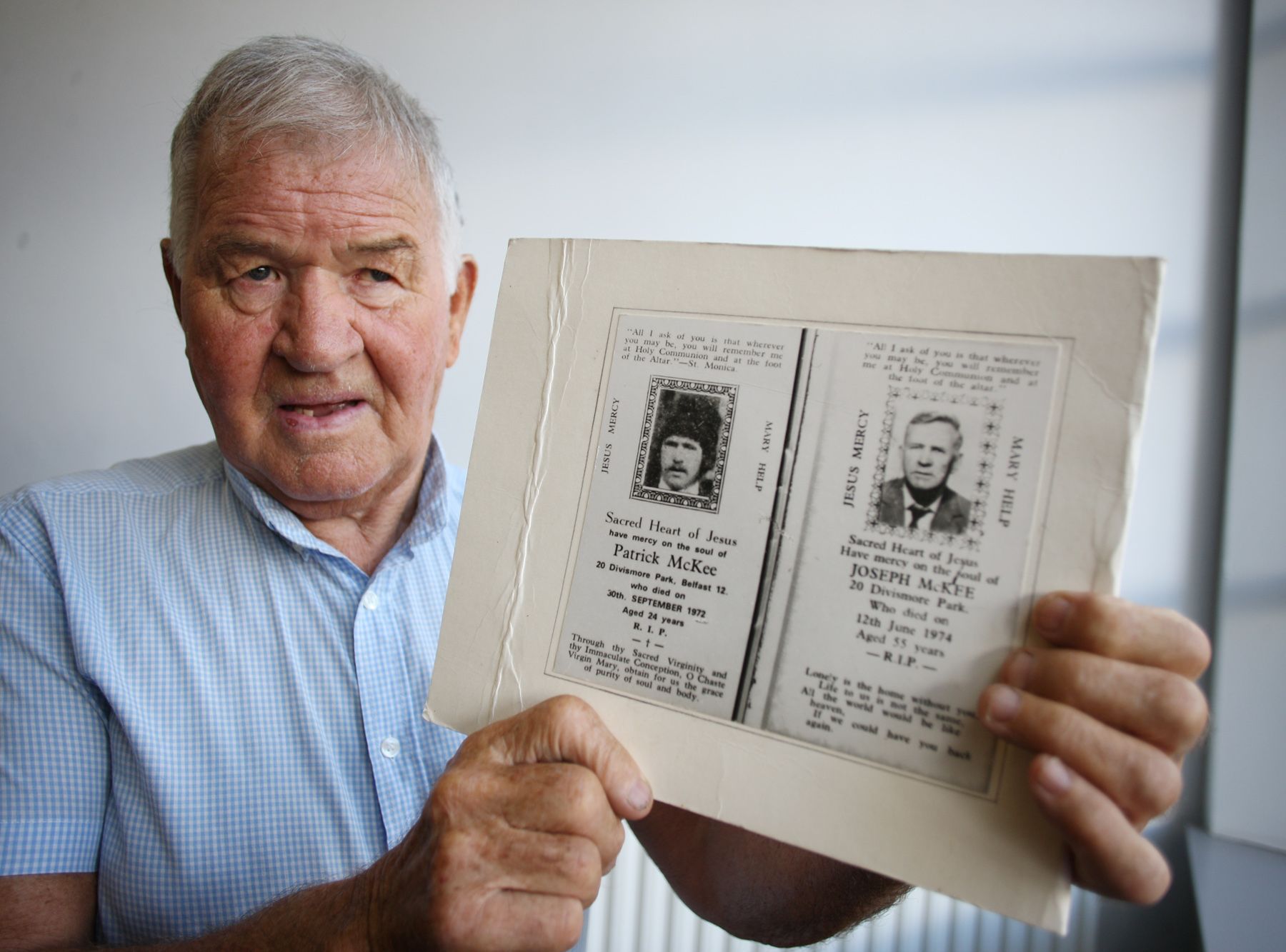 ANSWERS: Seamus McKee holds the memory card of his brother Patrick who was killed on 30 September 1972 and his father Joseph who died 18 months later

THE brother of Patrick 'Packy' McKee, who was killed in an explosion at Conlon’s Bar on Francis Street in the city centre 50 years ago this week, has said that he believes there was collusion in his brother's killing.

Speaking ahead of the anniversary of the explosion on 30 September 1972, which also claimed the life of Packy’s friend Jimmy Gillen, Seamus McKee explained that earlier that night Patrick and Jimmy had gone to Kelly’s Bar on the Whiterock Road "where they had been given a hard time by soldiers from the Parachute Regiment".

“They were heading into town to meet up with other friends at Conlon’s Bar where Patrick had a date. We believe that the soldiers followed them to the bar and that there may have been collusion with loyalist paramilitaries in the planting of the bomb.”

Between 7:10pm and 8pm that evening, a green Ford Cortina had been stolen from Twickenham Street with the owner reporting it the police immediately. Patrick and Jimmy arrived at Conlon’s Bar around 8pm and were joined by a group of friends at 8:15pm.

At 9pm, two uniformed RUC officers who were patrolling the Smithfield area drove into Francis Street and saw the car sitting stationary in the middle of the road outside the pub.

An officer approached the car and while he could not see anything inside, he could smell smoke before immediately returning to the police car to report what they had found. As he made his way to the police car, a device in the car exploded, blowing him over the car.

The front of Conlon’s Bar took the full force of the blast with Patrick and his friends – who were sitting by the window – showered in glass, wood and masonry.

Patrick was seriously injured and he was declared dead upon arrival at the Royal Victoria Hospital. The RUC started a murder investigation, but no one was arrested and a group calling themselves the Orange Loyalist Association, a cover name used by the UVF at the time, claimed responsibility and falsely stated that Conlon’s was used as a briefing centre for the IRA.

Seamus told us that while Patrick had been interned and released only 10 weeks prior to his death, he was never a member of a proscribed organisation.

Detailing the impact that his brother’s death had on his family, Seamus said: “I was the eldest so it really impacted upon me but my father took it really bad and he died of a broken heart 18 months later.

“After Patrick’s death, our mother went into depression too.

“When Patrick died, the Paras never left the wake. They lay in the front garden at night and gave abuse to anyone arriving at our house.”

At the time of their deaths, there was no post-mortem examination carried out on either Patrick or Jimmy Gillen.

An Historical Enquiries Team (HET) report into Patrick’s killing detailed how they had identified a “small number of cases” in autumn 1972 where no post-mortem was conducted. Their investigations found that at the time, due to the small number of pathologists and the upsurge in terror-related deaths, a decision was taken by pathologists that they would continue their normal work and ask the NIO to make alternative arrangements for the examination of paramilitary victims.

It was proposed that the NIO employ pathologists from Britain or use the services of hospital or military pathologists. The arrangements proved unsatisfactory and within three months, the pathologists returned to dealing with paramilitary-related examinations.

An inquest into Patrick’s death took place on 12 April 1973 at Crumlin Road Courthouse where an open verdict was returned. The HET investigation team were unable to locate any original case paperwork on the PSNI estate.

At the time, the team had attempted to engage with Detective Sargent Brian Roy who was the officer in charge of the investigation. He chose not to respond to their queries.

Eyewitnesses described how a man had entered the bar for a few seconds, looked around and then left. The bomb exploded 20 minutes later. There is no record of this man having been identified or of the RUC pursuing a line of inquiry that he may have been involved in the attack.