Paul grapples with our legacy of pain 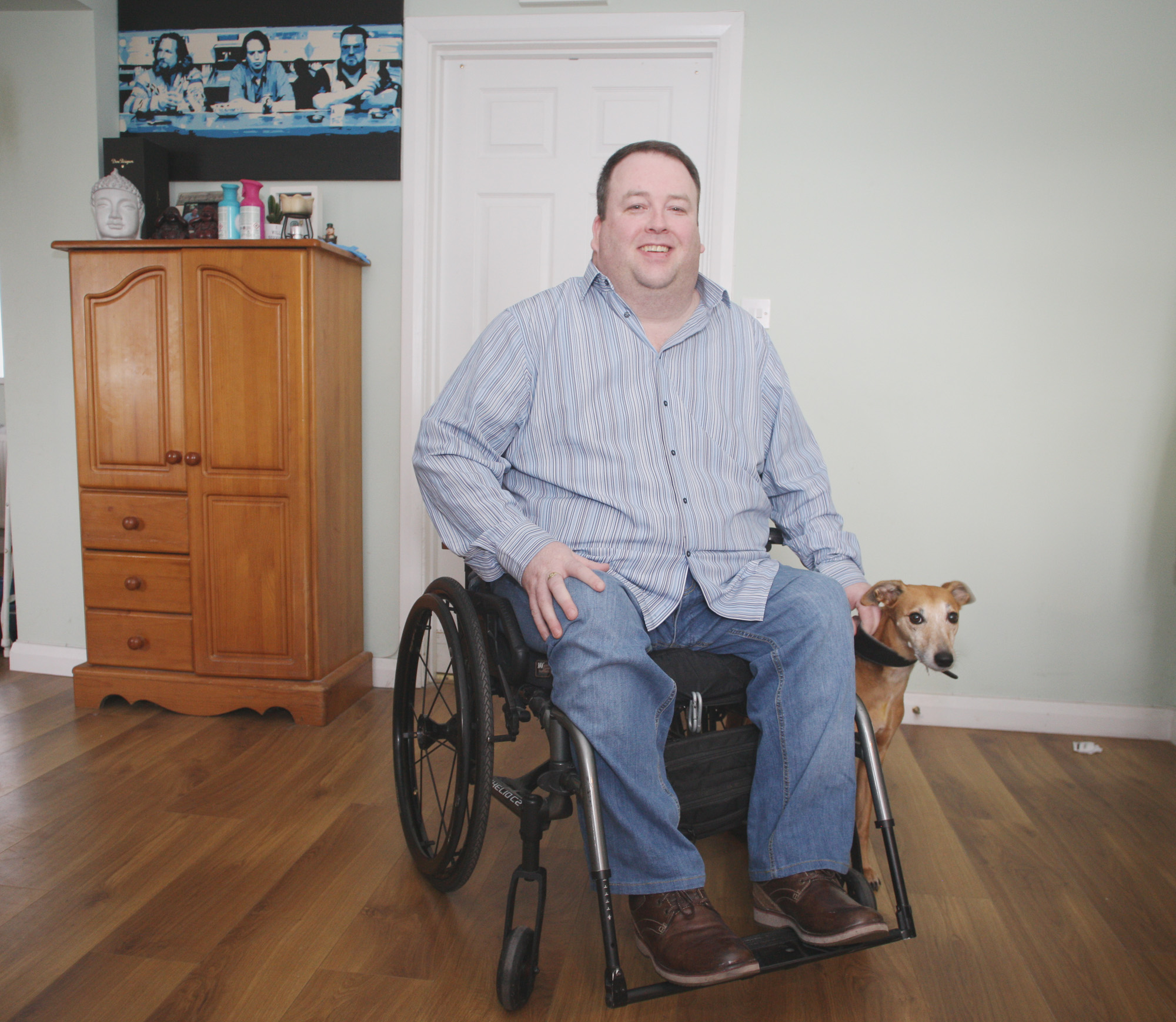 ENGAGEMENT: Paul Gallagher has been working with the WAVE Trauma Centre and Victims and Survivors Trust on issues around the past

IN our post-conflict society the various campaigns for truth and justice for the victims of our violent past have been long difficult. But it is only through the voices of campaigners such as Lenadoon man Paul Gallagher, that the issues of the past are still part of our public discourse.

In 1994, Paul was left paralysed after being shot by UDA gunmen in his Benwee Park home. Claiming to be the IRA, the gang held him and his family hostage as they prepared to attack a republican ex-prisoner who lived in a neighbouring house. When their target did not show, they opened fired, hitting Paul six times, one of the bullets shattering his spine. He also lost his spleen and half a lung.

Paul would spend the coming years on the long road to recovery, trying to come to terms with life in a wheelchair. It was only with the 2009 publication of the Eames-Bradley report on dealing with past that Paul decided to add his voice to the campaigns for justice. It was that decision that would lead him to the North Belfast-based WAVE Trauma Centre, which helps those who have been injured or bereaved by the Troubles.

“Around the time of the Eames-Bradley report, which was about dealing with the legacy of the past, I got annoyed because I thought there would have been something worthwhile in it, but there was a big furore around it,” he said.

“It was launched at the Europa Hotel and it ended up being a screaming match between different types of victims – you had victims from the unionist community and victims from the republican/nationalist community screaming and shouting at each other, and I thought the whole thing was just shelved over this notion of giving money to families of people who were killed during the conflict. On the unionist side they were saying that you couldn’t be giving money to ‘terrorist families’.

“I got a sense that there were other voices needed out there so I got involved in victims’ groups. I wanted to add a different voice to the debate and that took me to the WAVE and VAST (Victims and Survivors Trust) and I started to get an idea of the issues that were out there for victims. At the same time I started to go back to school, I did a degree in psychological trauma, plus I did some courses through WAVE on trauma that explained the context of the conflict. It made me look at things in a different way and it has brought me to where I am now, doing a PhD at Queen’s on these issues.”

Despite the toll of his own injuries, Paul has been a tireless in his efforts to put victims’ issues on the agenda.

“I wanted to give something back,” he explained. “When you start learning about the effects of trauma it’s enlightening. You realise that certain parts of your life are a result of traumatic effects and that you weren’t going mad over the years – these are normal reactions to abnormal situations. Its always good to let other people know that they aren’t going mad or that they aren’t stuck in their trauma.”

He continued: “WAVE also have what they call citizen educators, so they have about 20 or 30 people trained up to go and tell their story to certain groups of people. We would go into the School of Nursing, the School of Social Work, the medical students, the School of Journalism in universities, even to give them a basis on the trauma of this place – especially for young people who wouldn’t have any living knowledge or memory of what happened but who will be going into their chosen field and dealing with people on the front lines who have been affected. There are new media guidelines about interviewing victims, and also on how victims should engage with the media. It’s about making sure that they are not doing any harm to people and are able to help.”

A critical part of the Paul’s work is that of the WAVE Injured Group campaign, which aims for justice and acknowledgment of the trauma of those who survived the violence despite their injuries.

“There was a very little in Eames-Bradley for people with injuries, who have been left on the scrapheap, who weren’t able to go back to work due to the extent of their injuries, who were left on benefits with minimal compensation,” Paul went on.

“A lot of this group weren’t meant to survive their injuries but have due to the advancement of medical science, but their injuries have gotten worse over the years.There is one woman in our group who was injured in a shooting on the Grosvenor when she was 17 and she was told she wouldn’t see her 33rd birthday, but she’s in her sixties now.

“I have another friend, he’s 65, who has to get a further amputation on his leg, which was ripped off in a boobytrap car bomb 27 years ago, but it just keeps getting worse. There is no pension provision, people have been on benefits for 30 or 40 years, so we have been asking Stormont to provide a pension.

“They all agree that it should be done, but they get caught up in the argument about who should get it and who shouldn’t get it. These arguments are mostly from unionism, saying that you can’t give pensions to terrorists.”

In the absence of an Assembly the WAVE Injured Group have been successful in bringing their campaign to Westminster where MPs and Lords are now beginning to take their issues on board. However, the campaign is just one part of a wider drive to deal meaningfully with our past, which Paul views as “vital”.

“The past has to be dealt with,” Paul says quite simply. “It seeps through every part of our society. Luckily enough I’m dealing with it psychologically, but there are people out there who aren’t. There are people who aren’t even born yet who are going to be affected by the conflict if we don’t get some sense of justice. It doesn’t mean throwing people in jail, people are looking answers, they want family names cleared, people are looking reparations, pensions and support – they don’t want to have to go fighting for all of these things, which should already be put in place.”