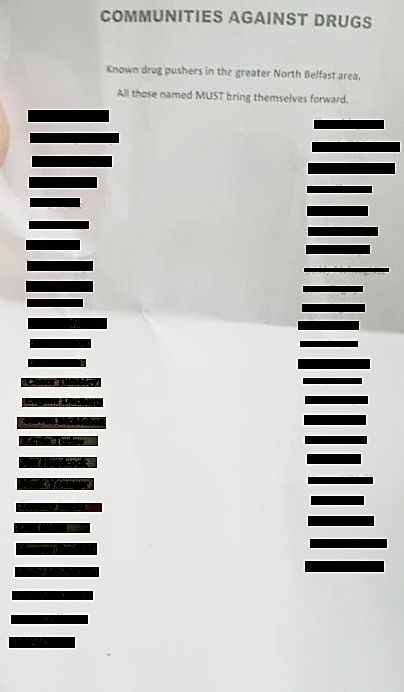 THE TOP local drug pushers have been left off a threat list circulated in nationalist areas of North Belfast, leading to speculation the kingpins are paying taxes to the shadowy group behind the warnings.

The document (right), which demands the people named come forward, was posted on social media and distributed in hard copy in the New Lodge by a group calling itself ‘Communities Against Drugs’.

The threats are understood to be legitimate with the PSNI afterwards seen visiting a number of homes in Ardoyne on Wednesday night to offer advice to those named.

Around 50 names are included on the list but a source told the North Belfast News that the names of the people left off the list are just as revealing.

“Within Ardoyne there are major drug pushers who are suspected of paying protection money so they are allowed to continue their deadly trade and it’s no surprise there’s no mention of these people – who everyone knows – on this list,” our source said. “Some of the names included on the list are very low level and some are just users. They may be involved in anti-social behaviour but they aren’t at the level of these other guys who apparently aren’t worthy of a mention.”

A list of alleged drug dealers from unionist areas was also distributed around the same time, leading to speculation that the unnamed group behind the list is operating in conjunction with loyalist gangs.

The names were circulated not long after the end of a public meeting by the Greater Ardoyne Residents’ Collective on the issue of drugs ended. However, a GARC spokesperson said they had nothing to do with the list.

“In the immediate aftermath of this meeting, leaflets were distributed across North Belfast, initially in the New Lodge,” he said. “They claimed to be from a group called Communities Against Drugs and named people who should come forward without saying who to, where to or how this could be facilitated.

“While this leaflet may have coincidentally gone out on the same evening as a well publicised open and transparent meeting, or it may be the result of frustration regarding ongoing death dealing, it is our opinion that it was intended to cause confusion within the local community and an attempt to dictate the pace of a viable, community response that will be public, structured and organised.

“GARC, and those who last night committed themselves to establishing a project that will empower and campaign on behalf of residents, played no part in this leaflet.”

A number of gangs operating in North Belfast have been accused of taxing drug dealers in the past and killing those who don’t pay up. ‘Action Against Drugs’ were blamed for killing low level Longlands dealer Danny McKay when his boss wouldn’t pay up in 2012, and Dunmore man Kevin Kearney was shot dead in Alexandra Park in 2013 by the ‘New IRA’ for what they said was his involvement in drug dealing. He is understood to have paid another dissident republican gang money to continue to deal drugs but had turned down a New IRA figure when he tried to extort money – a refusal that led to his death. His family deny he had any involvement in the drug trade. The spiralling drug problem in North Belfast has led to outbreaks of vigilantism recently with the homes of alleged dealers being marchen on by crowds of concerned residents (see below).

Local Sinn Féin MLA Gerry Kelly called on the threats to be lifted and a PSNI spokesperson confirmed they were investigating the list.

“We are currently carrying out enquiries into this matter,” say police. “While we do not discuss allegations against individuals, circulating material such as this is intensely unhelpful and potentially dangerous.

"Anyone with concerns or information about any form of criminality, report it to police on the non-emergency number 101 so that we can respond appropriately. Alternatively information can be provided anonymously through the independent charity Crimestoppers on 0800 555 111.”