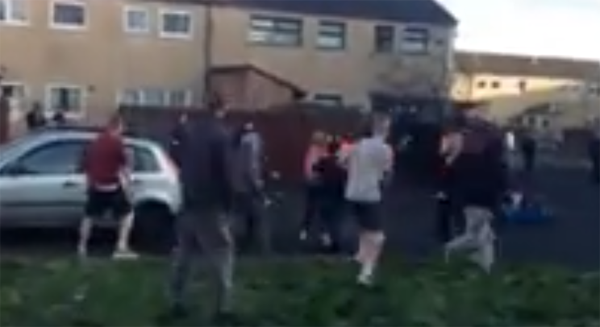 POLICE were called to a mass brawl off the Grosvenor Road at the weekend after a local feud spilled onto the streets sparking scenes of “absolute madness”.

It is believed around 35 people took part in the fight in Roden Street on Sunday afternoon. Local MLA Fra McCann condemned the incident revealing that this was the second street fight in the area in just three weeks. He urged those involved to stop letting personal differences spill on to the streets.

“There was quite a large number of people involved in the latest incident in the wake of another fight in the Cullingtree Road and Albert Street area in recent weeks,” he explained. “I’m not sure whether or not these brawls are connected but it has to stop. It is showing the area in a bad light.”

Footage, which is being widely shared on social media, shows men punching one another and brandishing an array of weapons in front of shocked onlookers.

“It seems that these people are unable to deal with their differences in other ways and have to go out and fight in the open, not appreciating the consequences,” he continued. “Young children were there as well as adults armed with baseball bats, hammers and other weapons that could injure or kill.”

Officers are understood to have arrived at the scene within minutes after a number of calls from alarmed neighbors.

“Some residents said it was just absolute madness but it’s how it’s brought to an end that matters now. Sometimes families fall out over the most trivial things and it leads to open war. I will be meeting with statutory bodies this week to address the issue,” added Mr McCann.