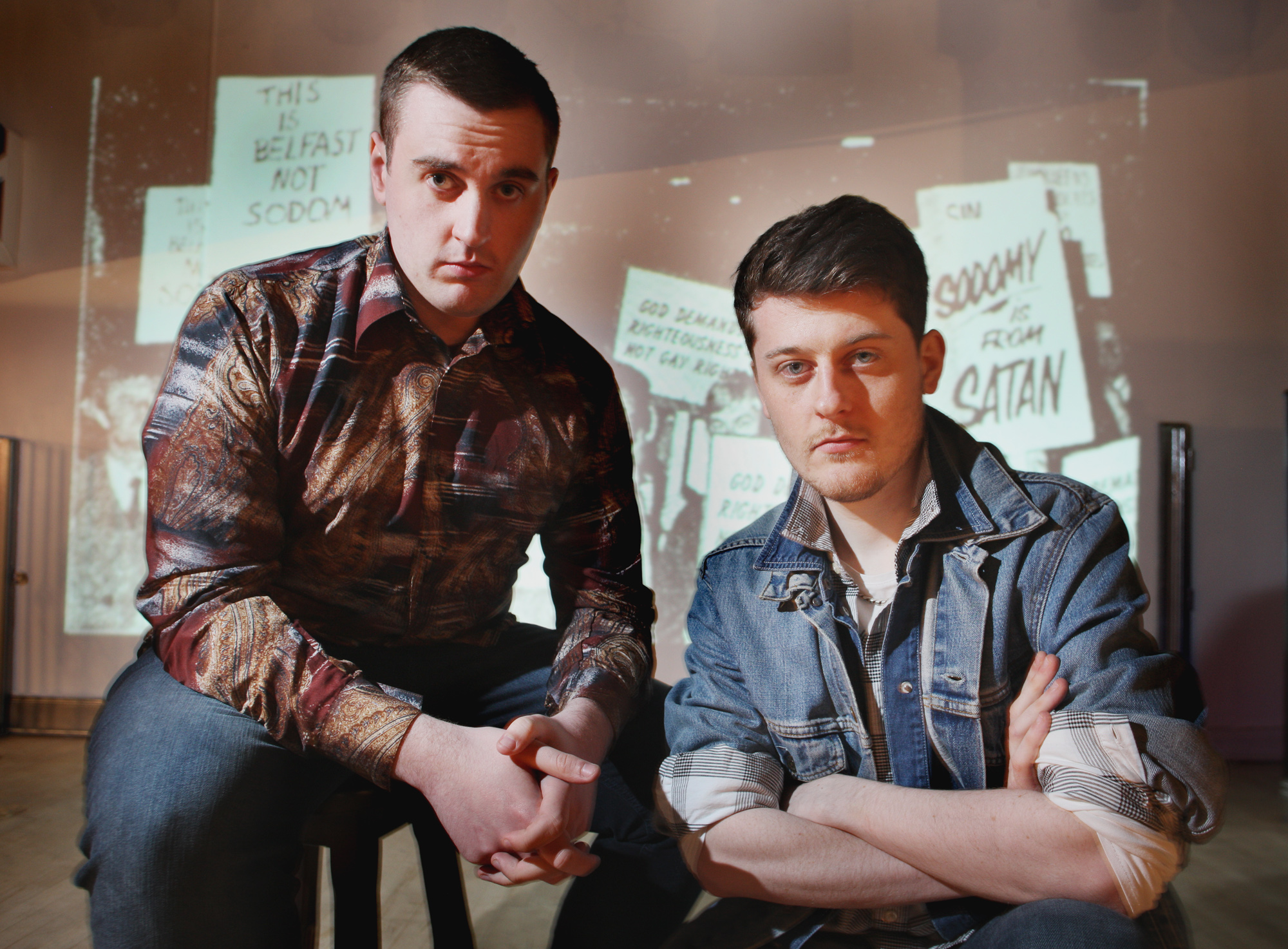 A UNIQUE and somewhat unheard of chapter in Belfast’s history will set out its stall at the Trinity Lodge this week, celebrating a story of commonality and camaraderie in the face of adversity.
‘A Queer Céilí at the Marty Forsythe’ by Kabosh explores the turbulent events of the National Union of students Lesbian and Gay Conference held in Queen’s University back in 1983.
Written by Dominic Montague, the play is a snapshot of tensions, discrimination and protest – but in stark contest all the conference delegates were invited to attend a céilí in the Marty Forsythe – now Trinity Lodge. A convoy of back taxis turned up to take the delegates to the club where a night of craic and inclusivity ensued.
“It’s a mental story, you couldn’t make it up,” says Kabosh Director Paula McFetridge inbetween ‘tech’ rehearsals on Monday afternoon.
“The majority of people don’t know this story, very few people actually remember it. It was two years after the hunger strike and you have to remember there were check-points in the city centre, barricades.
“Belfast was a ring of steel. Some of the delegates that came up to the Marty Forsythe that night couldn’t get back to the Student Union and stayed in houses, had their breakfast and left later that day.”
Paula said the idea for the céilí was the brainchild of veteran republican Joe Austin who met with the club’s committee at the time and proposed it.
“A fleet of around eight black taxis were sent down to Queen’s to bring the delegates back up to West Belfast. We have two guys flying into Belfast on Wednesday night for the premiere who attended back in 1983 and will make a presentation to the community. You had delegates from Ireland and UK coming to attend the conference and being met with Paisley’s ‘Save Ulster From Sodomy’ campaign. The welcome was much warmer in this community club.”
Starring in the production as one of the Manchester delegates, Gransha actor Brendan Quinn describes the piece and its themes “as very important in 2019”.
“I’m from Gransha and my parents weren’t even aware of the story which is just crazy. The delegates were welcomed in, had a célií, had their breakfast the next day and were driven back down to Queen’s. I think the play is very relevant, even in 2019 especially in terms of inequality. Northern Ireland is the only place where gay couples cannot legally get married – how far have we actually come since 1983? Really not that far when you think about it. It’s a story that needs to be told and it’s a story done with such truth,” he said.
Finaghy’s Simon Sweeney plays the youngest of the delegate group.
“The character I play is only 20-years-old in the piece and since he’s under 21 he can be punished for being a gay man, he can be imprisoned. It’s a rock on his back he’s carrying the whole time.
“The character I play wants to champion the change of law and that’s not being immediately discussed at the conference and he feels that he is not being represented, that comes up in the play and the character is then encouraged to see the bigger picture and not to be so selfish in his aims.”
Being a young cast Brendan and Simon were encouraged by Paula to not play some of their scenes so “light”.
“We don’t remember barricades, checkpoints, things that were so common during this time,” said Brendan. “Paula reminded that as well as the fun elements this is a serious play with important themes. It’s great to be a part of that.”
A Queer Céilí at the Marty Forsythe will be performed at Trinity Lodge from Wednesday March 27 until Friday March 29. Saturday night is sold out.
Tickets are priced at £12 and £10 and you can book online at www.imaginebelfast.com or telephone on 02890 246609.