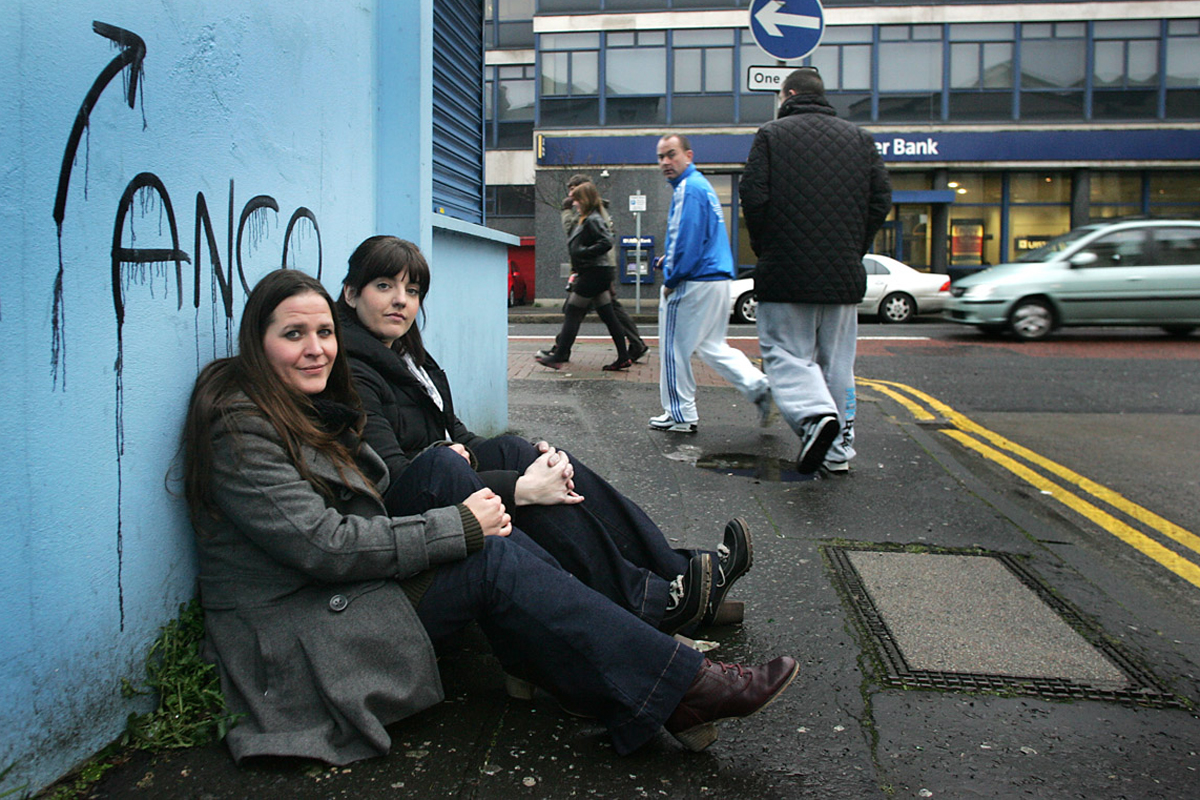 The city of Belfast has always had a rich supply of creative talent but it has only been in recent years that talent in working class areas has had the chance to have a real go at making a career out its gifts.

That’s the view of two of Belfast’s finest young actors who will be sharing the stage at the Grand Opera House at the end of the month.

Julie Maxwell from Alexandra Park Avenue and Louise Matthews from Ardoyne are two of the three-woman cast in Fionnuala Kennedy’s critically acclaimed play, Hostel, about the Belfast playwrights’ own experience living in sheltered accommodation.

The two actors are among a rising pool of acting talent from across the city who are trying to forge a career doing what they love to do.

Louise believes making a career from acting is much more acceptable now than it was for her parents’ generation.

“Previously there weren’t many people who went for any kind of career in the arts,” said Louise, who plays ten different characters in Hostel, “although there were always loads of artists. My Daddy was a painter but then became a plasterer to make a living so there would have been a lot of talent but that wouldn’t necessarily have been used as a career. It is not easy. It would have been easier if someone had went before and was able to guide you along the path.”

Both actors had helping hands in their careers after their talent was identified at an early age. Louise received a scholarship from the K Club in County Kildare to study at the Gaiety School of Acting in Dublin, while Julie got a bursary from A-list actor Kenneth Branagh.

But even now with increased opportunities for actors many are still having to look to London for jobs, such is the competition here.

“I have just moved to London and I am in the middle of looking for a London agent,” explained Julie.

“There’s work here but there’s not a hell of a lot and it has got to the point where I have had to go. To be completely honest it is something I have been forced to do with the cuts in the arts here.”

Louise, who first got into acting at the Golden Thread Gallery in the Ardoyne Linen Mill in the 1980s, has also had to look further afield.

“I would have to bounce over to London and be based here in Belfast but that is difficult with London agents wanting you to be based there where you have to be available at the drop of a hat.”

That can be a struggle financially which they say helps them identify with their characters in Hostel, who face similar difficulties, albeit on a more extreme level.

The play, which debuted at the Belfast Fringe Festival in 2010, tells the story of Maria, a young university graduate and single mother and her experiences living in sheltered accommodation.

Written and directed by Fionnuala Kennedy, it is based on her own experiences living in a hostel.

“It is her story and knowing her personally, knowing that this is her story – you can’t mess about with that,” said Julie, who plays the lead role of Maria.

Louise says the story is even more relevant now than in 2010 because of the seemingly unending recession.

“Difficulties with the system, that trap of getting caught below the bread line and how do you get yourself back up is something that lots of people can identify with,” she said.

“It’s so easy to fall into it and that is the reality, even more so now. The play is even more relevant now than it was a few years ago and the language is language people can identify with.”

For Julie this will be the third run of playing Maria and she says that despite her extensive practical knowledge of the play it continues to surprise her and remain fresh.

“The script hasn’t changed at all but the whole thing has changed for me because there are elements I missed that the first time, different things about characters and back stories that I maybe didn’t pick up on the first time and that is one of the great things about it.”

For Louise playing multiple characters has been a challenge she has relished.

“Because the characters are so well written it is easy to snap from one character to another because you know exactly who that character is,” she said.

“At one point I come out from a massive argument with Maria and the next minute I am playing someone else trying to calm Maria down. Your energy is pumping and you are still angry but you just have to switch off, but I love that challenge.”

Another challenge that they will face is when they take the show to real sheltered accommodation across the North. It is something they did in 2011 and which they have brought back.

“There are no lights, no set, you are in a very small room right in front of the audience, it’s nerve wracking but amazing,” said Julie.

“The audiences loved it, everyone we spoke to said it’s a story that needs to be told and they were so glad that it was handled in the way that it was because it is not depressing, it’s funny and uplifting.”

Louise said she hoped as many young girls as possible get to see the play.

“Just to show them the path you can end up on if certain choices you make. It is a brilliant lesson for younger people.”