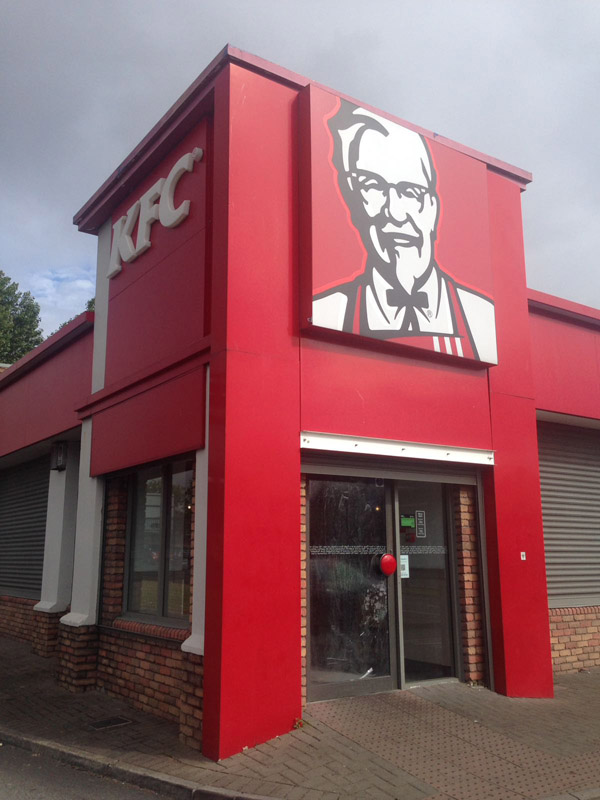 The KFC in Brougham Street

Detectives investigating a violent attempted robbery at a fast food outlet in North Belfast at the weekend, are appealing for information and witnesses.

Staff fought with a gang – one armed with a knife – who tried to gain access to the premises on Saturday evening, first through the locked main door and then via the drive-through access.

Detective Sergeant Keith Wilson said: "We received a report at approximately 10:15pm that three men had attempted to enter the premises in the Brougham Street area through a locked front door. The suspects then approached the drive-through area of the premises, and threatened staff with what was described as a pen knife.

"A struggle ensued between one of the suspects and two of the staff members, who managed to fight him off.

"The males subsequently fled on foot, and are believed to have gone in the direction of North Queen Street. Before leaving, one of the males kicked a glass front door causing the glass to crack.

“There were no reports of any injuries during the ordeal, however, staff members have been left shaken. Nothing was reported stolen.

“Police are particularly keen to speak to a customer in the drive-through area last night who was there at the time of the incident.

“Police are also investigating the report of a theft at the same premises on Wednesday night, 13 June at around 10:40pm when a cash till was reported stolen from the drive-through area. The male suspect is described as having worn a dark-coloured top.

“We are investigating the possibility these two incidents may be linked and would appeal to anyone with information to get in touch.

“I would urge to anyone who was in the Brougham Street area last night at around 10:15pm, or on Wednesday, 13 June at around 10:40pm and noticed any suspicious to contact detectives at Musgrave on the non emergency number 101, quoting reference number 1511 of 16/06/18.

“Alternatively, information can also be provided to the independent charity Crimestoppers on 0800 555 111 which is 100% anonymous and gives people the power to speak up and stop crime.”