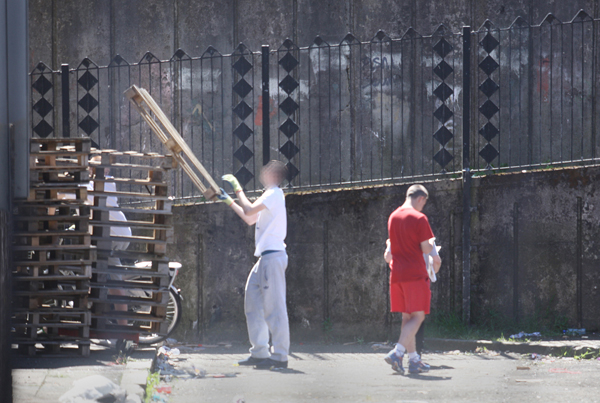 Belfast’s most senior cop met with community workers on the New Lodge this week as efforts were stepped up to prevent the annual August 9 bonfire from taking place.

The North Belfast News understands the PSNI were challenged on their lack of effort in combating the fires which have been widely rejected by the local population.

However the PSNI have said following the meeting they will step up patrols in the area.

The builders claim they are commemorating the 1971 introduction of internment but in recent years the bonfires are synonymous with drug taking, alcohol abuse and anti-social behaviour.

Superintendent Chris Noble was joined by neighbourhood officers at the meeting where he was told New Lodge residents wanted more support from the police. Until now, the majority of pallets have been removed by Sinn Féin councillor JJ Magee and other members of the community.

Kate Clarke from New Lodge Safer Streets said that local people have had enough. People are so frustrated with this because it’s only a small amount of young people but they are running wild.

“The pallets are being lifted as soon as they are collected but the fear is that on the day they will be able to build a bonfire.”

Cllr JJ Magee said the PSNI were told that the people of the area wanted action.

“The message emerging from the Safer Streets Initiative meeting is that the New Lodge community are united in our opposition to bonfires and statutory agencies must step up to the mark by taking effective action.

“This has been an important and well attended gathering today in the heart of the New Lodge and decision makers from a range of public bodies were able to hear directly from residents being plagued by anti-community activity associated with unwanted bonfires. Good work has been done in recent years to reduce this problem and once again this year huge quantities of wood intended for a bonfire have been lifted but much more remains to be done. Residents told agencies, including the PSNI, that they were being plagued on a nightly basis by an organised group of thugs who are often involved in violence.

“We are demanding in the strongest possible terms that action is taken and that statutory agencies work closely with the community in the days ahead to tackle bonfires and the related anti-social behaviour. The New Lodge is a good community which is currently having its reputation damaged by a small minority.”

Sergeant Craig McDowell, who attended the meeting, said they would be increasing their visibility in the area.

“We have already increased police resources in the area and will continue to work with our partners including Belfast City Council and other public and statutory bodies, as well as community representatives, to address any community safety issues linked to wanted and unwanted bonfires,” he said.

“Although police have no legislative powers to remove bonfires or waste which has been illegally disposed at sites, we will support other statutory bodies carrying out their role if requested to do so.”