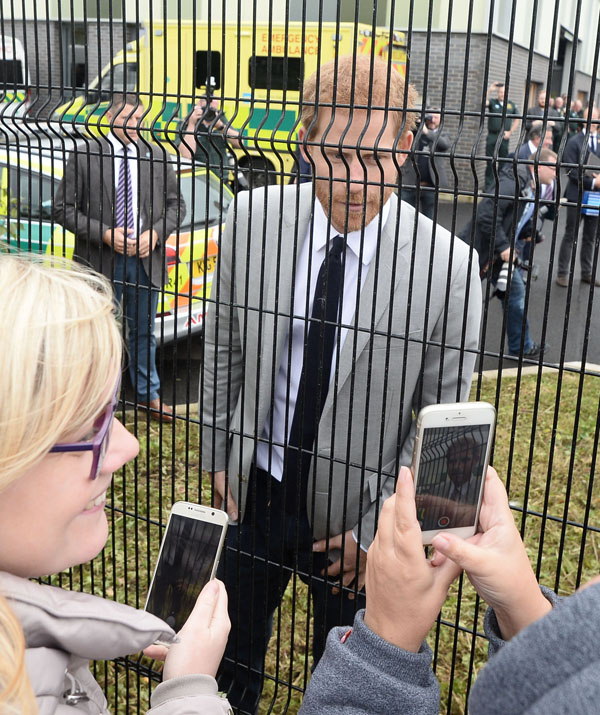 A HEART procedure at the RVH was cancelled due to Ambulance Service vehicles being sent to put on a display for British royal Prince Harry at the opening of a new station, a source has told us.
Prince Harry opened the new Ballymena station last Thursday during his first official visit to the north and the Ambulance Service put on a show to mark the event.
But a source told us that a heart procedure was cancelled at the RVH because of a lack of available vehicles to transfer the patient from Antrim as resources were in Ballymena for the royal display. Our source said that senior management were “expressly told” that the appointment had been cancelled because vehicles and staff were at the Ballymena event.
“Last Thursday a patient was scheduled for a routine transfer from the Antrim Area Hospital cardiac ward to the Royal Victoria Hospital for a planned cardiac procedure,” our source said.
“They were supposed to be at the RVH between 9am and 10am, but it didn’t happen because the vehicles weren’t there.”
Our source said that three ambulances from the northern area and two Rapid Response Vehicles (typically estate cars) were sent to attend the royal visit, leaving the Ambulance Service badly short of cover.
“This had a knock-on effect to the routine transfers throughout the day,” our source said. “Shortly after 1pm the Antrim Area Hospital rang to ask for a time to take the patient but they could not be given a time due to the amount of vehicles that were down. This resulted in the hospital having to reschedule the appointment altogether.
“Why didn’t the controller send an ambulance? The job of the Ambulance Service is to attend to the public when they are most in need. What good are they sitting up at a display in Ballymena ambulance station?”
NI Ambulance Service Northern Area manager Gareth Tumelty confirmed that there was a shortage of vehicles on the day and that an RVH cardiac appointment had been cancelled as a result, but he described the shortfall as “completely coincidental”. He said staff at the Prince Harry event in Ballymena were there on roistered leave and that some vehicles were off the road because of staff sickness.
“Any staff who attended the opening were not compromising patients care at all,” he said.
“That’s one of the most important preparations we made, ensuring that whoever was attending the ceremony did not compromise patient care – and they didn’t.
“Any RRVs at the station were able to respond as and when they were needed. RRVs are not used in routine transfers.”
He added the RRVs could not be used to free up ambulances to complete the routine transfer, as they would not be able to transport the patient should they require further treatment.
“Unfortunately this isn’t the first time a cardiac procedure has needed to be rescheduled, it depends on the emergency calls in the area at the time,” he added. “We had dropped a number of vehicles that day due to staff leave and staff sickness but any staff attending the opening were on roistered leave.”
But our source told us that staff were sent to Ballymena to put on a display for Prince Harry even though the Ambulance Service was aware that there was no cover.
“They just couldn’t get anybody to come in to cover because nobody wanted to, and yet still these resources were sent to Ballymena for a royal photo shoot. Those are the facts. And to say that RRVs don’t do routine transfers is to miss the point entirely.
“The RRVs free up ambulances to do the necessary transfers and they weren’t there to do that, so of course this is what happened. The fact is that a decision was made to deploy resources to Ballymena even though it was known that there was no cover for them. Senior management were expressly told that this transfer couldn’t be made due to resources being deployed to Ballymena.”