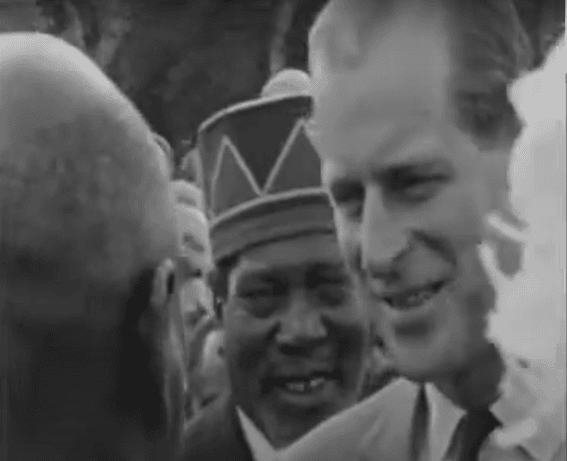 NO GOING BACK: Prince Philip at the Independence of Kenya ceremony with former prisoner of Her Majesty Jomo Kenyatta.

ALL over the media, analysts are in a contest about who has the most documented gaffes made by Prince Philip. He was known for that.

Philip’s grandson Harry has added to this catalogue of tributes. The other day Harry joined the chorus by remembering Philip as the legend of banter. Africans have their share of memory of Phillip-speak. Queen Elizabeth II sent Prince Philip to represent her at the Independence Day celebrations in Kenya, he did make a fool of himself with one very unfortunate remark at the event. On that warm evening of 12 December 1963, the colourful red, green and black Kenyan flag was waiting to replace the Union Jack which had been reigning over the country for over forty years.

It was an evening packed with dancers, singers, bands, speeches, the lot. Prince Phillip was sitting next to Jomo Kenyatta, the Kenyan nationalist leader who had just been released from the colonial prison two years earlier. So, Kenyatta and Philip are exchanging niceties and histories of the past. The two knew each other very well... we will come to that.

Philip had direct power as a very important figure in the royal family to influence what was happening to Jomo Kenyatta, good or bad. When Kenyatta was finally jailed, Prince Peter tried using third parties and finally speaking to Philip himself to impress on the British government and the colonial office to have Kenyatta and the other prisoners freed.

Just before the final last whistle at midnight as the British flag was coming down from its mast in the final moment of British rule in Kenya, Prince Philip tells Kenyatta that there was still time to change his mind if he wanted to. Kenyatta was furious with Philip for suggesting that the Africans were not ready for their freedom and Britain should continue its colonial rule even though the Prime Minister had made it absolutely clear that the winds of change that was sweeping across Africa could not be stopped anymore.

Kenyatta had read a lot about the Queen’s husband, that he was a man who did not measure the consequences of his social and political statements which for his entire life, were communicated as mere banter. So, Kenyatta instead behaved like a statesman and responded with a polite no to Phillip’s last-minute offer to keep Kenya British for longer.
Over 45,000 African people had died during the eight-year war of independence instigated by the freedom army Mau Mau and a war which Britain finally bowed out of because of international concerns, human costs and financial consequences.

On that Independence Day, Jomo Kenyatta became Prime Minister of the Republic of Kenya after exchanging final signatures with Philip who was acting on behalf of Britain. Prime Minister Kenyatta shared the story of his shock at Phillip’s comment with renowned African-America media entrepreneur John H Johnson who was part of the large US delegation to the event. Johnson was the proprietor of Ebony and Jet magazines among other media concerns.

Philip and Kenyatta came from two different traditions, social and economic backgrounds. Philip was in the high pecking order of royalty. Kenyatta was just another peasant whose grandfather and father practised traditional medicine and witchcraft. Kenyatta sailed to England in 1929 to agitate for the rights of the Kikuyu, the community he came from. Philip was born a prince of Greece and Denmark just like his cousin Peter, a prince of Greece and Denmark.

The two Greek/Danish royals shared a common ancestry through King George I who was assassinated. Peter and Kenyatta became very close friends when they met as postgraduate anthropology students at the London School of Economics.

According to George Delf, the author of the 1961 book ‘Jomo Kenyatta, Towards truth about The Light of Kenya’, the two met in 1936.

They were both totally emersed into the research about cultures and human social relations. Kenyatta’s fee was paid by the European-led International African Institute, a factor which he resented but he had no choice.

So, when Prince Philip’s older cousin noticed the financial difficulties of Kenyatta at the time, he bailed him out and even invited him to stay at their royal palace in Denmark. Kenyatta stayed with Peter’s mother, Marie Bonaparte who was a follower of Sigmund Freud. In May 1936, he travelled to Denmark where Peter hosted him before the aristocratic family arranged for Kenyatta to live at the International School so it is said, he could visit the local cooperative farms there with the relatives of Prince Philip for many months before returning to England. The colonial security intelligence services in London would have followed his every move.

When Kenyatta went back to Kenya after sixteen years living in England and travelling in different parts of Europe, he remained a person of interest because of his political work especially during the early Emergency period when the colonial government restricted movement by Africans. Kenyatta and other nationalists were arrested on October 21, 1952 on charges of having direct control and guiding the guerrilla forces Mau Mau.

Prince Philip represented the Queen when Kenya was granted independence. As the Union Jack was lowered, there was an awkward moment when it got tangled. Prince Philip turned to Jomo Kenyatta and said “Are you entirely sure about this? It’s not too late to change your mind.”

It is important to note that Prince Philip and the Queen visited Kenya the same year, February 1952 when the death of her father interrupted their holiday. Philip had direct power as a very important figure in the royal family to influence what was happening to Jomo Kenyatta, good or bad. When Kenyatta was finally jailed, Prince Peter tried using third parties and finally speaking to Philip himself to impress on the British government and the colonial office to have Kenyatta and the other prisoners freed.

His request fell on deaf ears and that is how Philip can be remembered in terms of the route to the long independence struggle in Kenya.

He was indifferent about voicing for his cousin’s friend Kenyatta. It is strange rather, that for a man who suffered much of the challenges of migration as a royal refugee fleeing Greece, the colonial oppression in Kenya by his immediate family was not a thing to worry him.