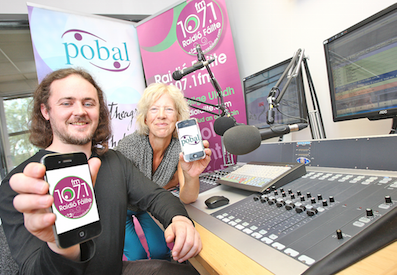 RAIDIÓ Fáilte, Belfast’s Irish language community radio station, is celebrating an historic victory at the Celtic Media Festival in Wales, where they won the top radio award, ‘Radio Station of the Year 2018’.
The prestigious award is based on competition open to all radio stations broadcasting in the Celtic countries and areas – Ireland, Wales, Scotland, Cornwall, Isle of Man and Britany. Major stations such as BBC and RTE as well as broadcasting companies take part in the competitions and the awards are keenly sought and highly regarded as major accolades for the winners.
The international jury who assessed the entrants praised the high production quality and great content of all those who got shortlisted for the award. They stated, however, that the Raidió Fáilte entry stood out for its spirit; for the range of subjects covered; for its great programmes; for its connection with the community: for its understanding of the community: for its reporting from local events and festivals; for supporting local youth and other activities; for the range of presenters of every age; for the work of training future broadcasters’ and for its ambitious plans for the future.
Accepting the award on behalf of the Raidió Fáilte staff and volunteers, Raidió Fáilte Manager Fergus Ó hÍr said he dedicated the award to the community in Belfast who are struggling daily to promote and develop the Irish language and to bring it to its rightful place in society.
Speaking after the awards, Fergus praised the work of the small team at Raidió Fáilte, the large group of volunteer presenters and the directors who give of their time and expertise to bring Raidió Fáilte to the level of success that the station has achieved. He thanked people in the community, both Irish speakers and those who do not yet speak the language, for their ongoing support.
“We are a community station run by the community for the community,” he said. “We aim to bring the wealth of our culture to all who wish to be enriched by it and to enjoy it. We will soon be moving into bespoke new premises, we are grateful to those who fund and support the work of the station. We will invite anyone who is interested to visit us in the new premises, to attend our regular training and other events and, if they wish, to become qualified as community broadcasters with us. At the moment our licence allows us to broadcast in the greater Belfast area, although we can be heard worldwide on the internet. We hope that in the near future we will be able to widen our broadcast coverage area and to be more easily heard by audiences over a much greater area.
“This prestigious award reflects on the most positive strengths of our community and on all those who are struggling for a fairer society where all positive and inclusive cultures are respected and celebrated.”