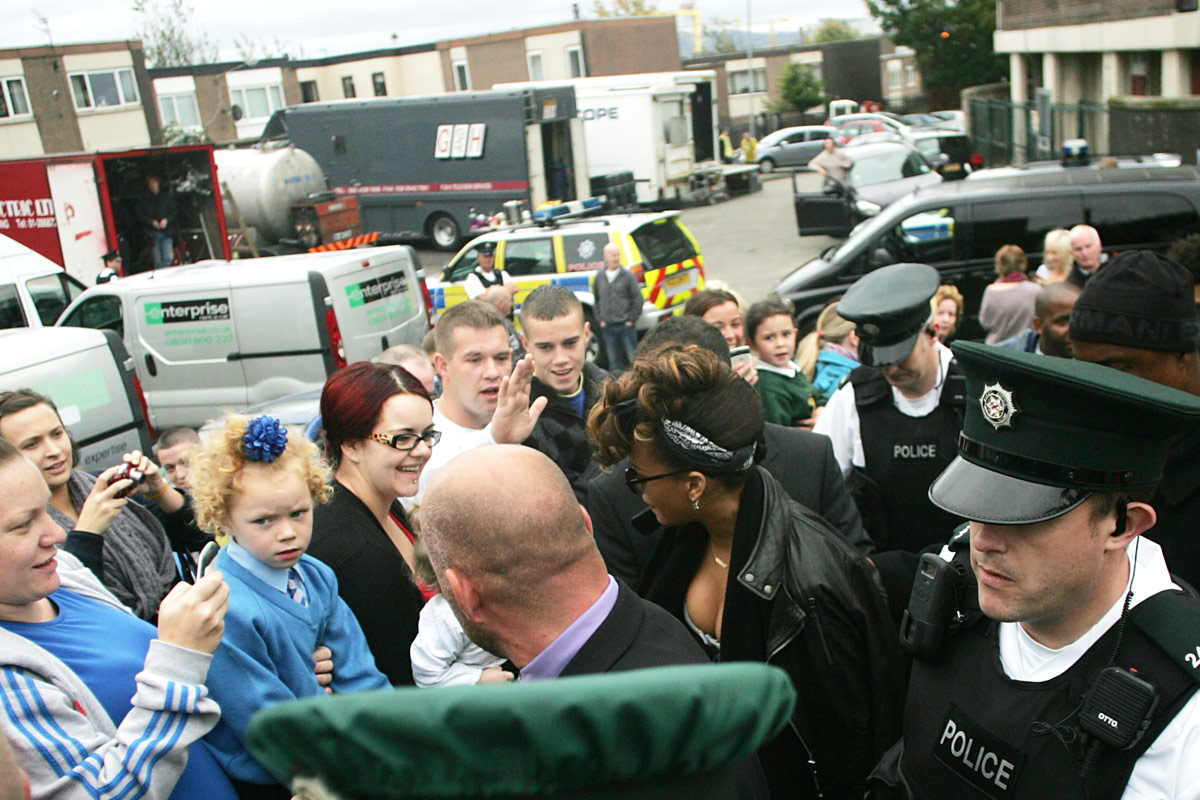 EARLIER this week when I heard that pop megastar Rihanna had been reprimanded for her “inappropriate” behaviour by a Co Down farmer, I recoiled with embarrassment.

I’m not a Rihanna fan and regularly order my six-year-old niece not to become a Rihanna fan either.  I think her performances are a bit racy for six-year-old eyes, but when you hear that a grown man, perhaps unsurprisingly a DUP councillor, has chastised one of the world’s most popular acts for wearing a bikini in public, all you can do is squirm. Of course his disapproval made headlines around the globe, leaving the world to think that we are a bunch of killjoys who, when we aren’t killing each other, put in time stuffing our shirts.

The debate on whether Captain Buzzkill was right or wrong to rain on Rihanna’s parade has been filling column inches and the airwaves all week – and why would the Andytown News be any different?

We took to the Kennedy Centre with a photo of Rihanna cavorting about in the Bangor field and asked the centre’s shoppers for their thoughts on the debacle.

“She’s wearing a bikini, what’s the problem?” asked Roisin Maguire from Beechmount. “I bet he had a good juke at her before he told her to cover up!”

Gerard Wallace said he didn’t understand what the fuss was about. “What was wrong with what she wore?” asked the Ballymurphy man. “I really don’t see where he was coming from.  I don’t see any problem with it.”

Sharon Teggart from the Glen Road offered advice to women when she saw the photo.  “Lock up your men!” she laughed.  “I think it was a publicity stunt for her and sure it has worked a charm.”

Alison Maguire from Crumlin said her immediate thought was for the superstar’s health.

“I was wondering how she stood there in the cold wearing that, it would be freezing,” she laughed.  “But fair play to her, if I had a body like that I might do the same. What man in their right mind would tell her to cover up?”

Stevie Connolly is just back from a trip to Spain where, he says, he saw girls wearing less than bikinis.

“I was in Majorca and there were people wearing no gear at all so this photo would not offend me,” said the Andersonstown man.  “If a girl wants to show what she’s got then fair play.”

Daniel Jamison was on his way to purchase tickets for Rihanna’s weekend concert when we asked him his thoughts.

“I’m not offended at all,” said the Falls Road lad.  “I would tell that farmer to wise up. Watch one of her videos mate and then tell her to get out of your field!”

Meanwhile, two West Belfast brothers have been asked to be in the video Rihanna is shooting in Belfast.  Conhuír and Denis Lynn, from Andersonstown, are professional and amateur skateboarders respectively.  Yesterday the duo, aged 24 and 18, spent the day on standby in South Belfast where they would be performing their skills for the superstar’s latest video.