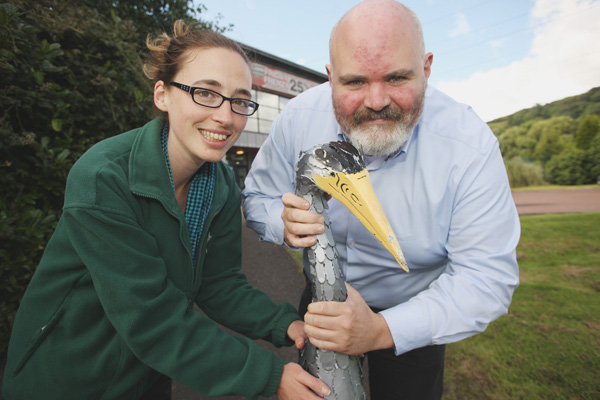 AN eagle-eyed reader of the North Belfast News has solved the mystery of the missing Throne Wood heron that had stumped the local PSNI.

Last week an appeal was issued by the force after the large sculpture, that had been designed by a local artist along with school children, was removed from its perch in the forest that lies between the Antrim and Whitewell roads.

The forest, which has recently received tens of thousands of pounds worth of investment to improve trails, is being developed as a local recreation resource by the Woodland Trust and the sculpture was put there to make the area more attractive to families.

The North Belfast News was contacted by a 61-year-old mother who said she had read the police appeal in last week’s paper and realised she knew where she had seen the bird.

“I walk past a house on my way to work and I remember seeing the bird stuck in the ground in the back garden. It was only when I read the North Belfast News that I realised it had been stolen.”

Fearful the people responsible would see her, the woman, who does not want to be identified, hatched a plan to get it back.

“I went up to the house around 11.30pm last Saturday night to get it back. I must have looked like a mad woman climbing into the garden. But then it was dug into the ground quite deep and when I was trying to pull it out I fell on my back!”

After freeing the captured bird the woman then made her escape and phoned the North Belfast News and we were able to return it to Rosie Irwin from the Woodland Trust on Tuesday.

Rosie said they were indebted to the newspaper and our reader for getting the sculpture back.

“We are now going to have the sculpture repaired and returned to the location although we will have to work out a way to do it that doesn’t lead to it being stolen again.

“We want as many people as possible to enjoy Throne Wood and we are so grateful to the North Belfast News and this reader for getting back the sculpture.”

The Woodland Trust has presented our reader with a bouquet of flowers along with a complimentary year’s membership of the organisation.