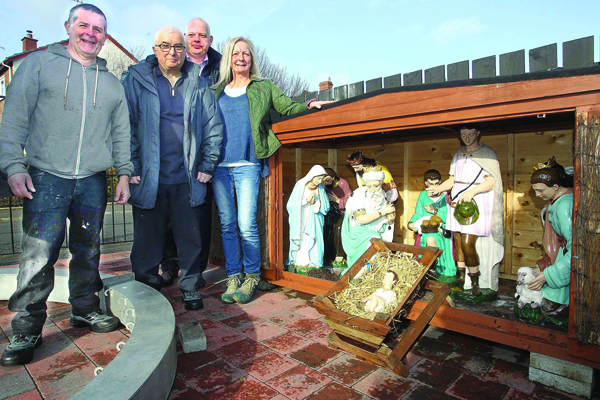 HUNDRED-year-old nativity statues rescued from destruction and restored by a local artist will form the centrepiece for the annual Bawnmore Christmas display.
Thanks to the local church, Bawnmore Community Association and the Housing Executive the figures will be used in a nativity scene below the Christmas tree.
Seamus Kelly from Bawnmore Community Association said the figures were almost lost for good.
“Almost ten years ago a Housing Executive representative suggested we get a public Christmas tree in Bawnmore and the Council helped us source one for external use,” he said.
“A local priest, Father Alexander, joined Reverend Liz Hughes from the nearby Whitehouse Presbyterian congregation at the lighting event to share some prayers to reflect the goodwill of the season. Afterwards, we spoke to Fr Alexander about adding nativity figures to accompany the tree and he revealed he was about to dump a pile of broken and damaged statuettes from St Mary’s Star of the Sea Church – they were in such poor repair he wasn’t sure if they were able to be saved.
“Many of the older parishioners remember these being on display when they were children – it’s reckoned they’re around 100 years old.”
After getting hold of the statues and with the help of the Housing Executive, artist Janet Crymble agreed to take on the restoration project and worked with young people in the area to clean the figures, produce new moulds and replace and re-attach limbs.
Painting workshops were also held and local children helped paint base coats, fine details and applied the final varnish to protect the revamped statuettes from the elements.
The figurines will be on display in the Bawnmore area in the run-up to Christmas in a wooden manger built specially by local company Murray’s Sheds.