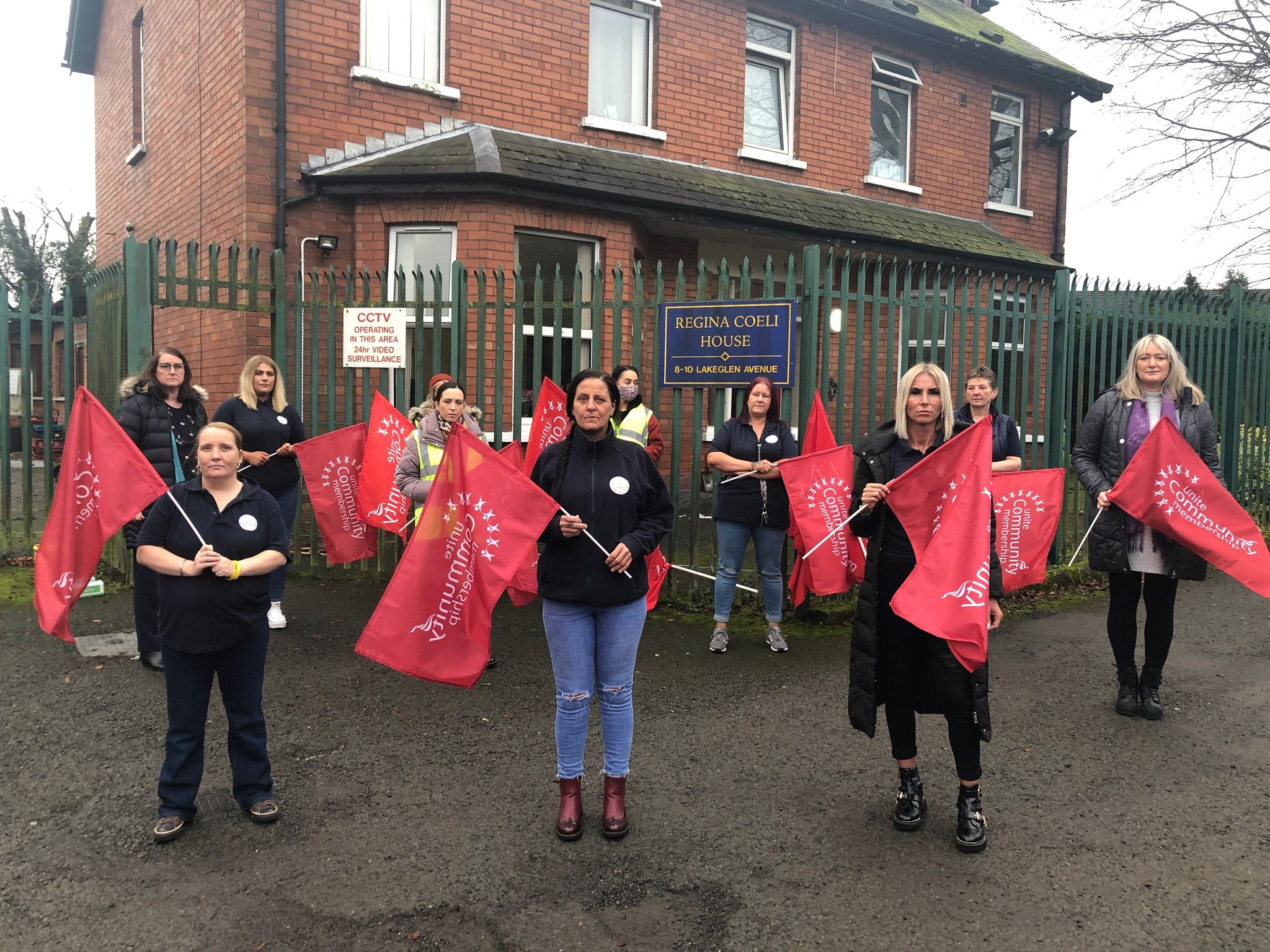 STANDING TOGETHER: Unite the union members are staging a "work-in" to save Regina Coeli House from closure

POLITICAL representatives have backed trade union calls to prevent the closure of Regina Coeli Hostel, where workers are holding a 24/7 "work-in" to save the facility.

The hostel in the Lake Glen is set to shut down in Spring 2022 after a recent survey found that it needed repairs costing over £500,000.

Since 1935, the hostel has provided temporary accommodation to homeless women, many of whom have suffered domestic violence or have a history of rough sleeping.

The building is owned by the Legion of Mary with services provided by an independent team operating under the banner of the Regina Coeli House Hostel.

Members of Unite the maintain workers’ control over the house to ensure support for the remaining residents until there is a guarantee from Stormont that it will not be closed.

"This will put the impending closure of this vital facility firmly on top of the agenda of the Stormont Executive," she said.

Our Community members have been campaigning for many months against the closure of the Regina Coeli facility in West Belfast and were here again today to offer support to the workers and residents of this vital hostel ✊ pic.twitter.com/dBkM3m5ilA

“It is simply unacceptable that the one female-only facility, in Northern Ireland, offering support to those with homelessness, addiction, abuse or mental health issues faces closure. Unite is demanding the Communities’ Minister intervene and save Regina Coeli House.”

Unite the Union has called for an urgent meeting with Communities Minister, Deirdre Hargey.

Speaking at a protest at the hostel on Wednesday, People Before Profit MLA Gerry Carroll reiterated the call for the Minister to "urgently intervene."

Her department's hitherto sideline role in this situation is a disgrace," he said.

"There is a clear need to save this hostel, with domestic violence levels as they are, and the Minister has a duty to provide a long term, sustainable funding mechanism, alongside the Housing Executive.”

Ms Hargey's party colleague, Aisling Reilly MLA, called for urgency in finding a resolution to protect services at the hostel.

“At a time when we are witnessing increased levels of domestic abuse due to pandemic, this facility should reman open," the Sinn Féin MLA said.

“Sinn Féin has met staff and residents who have continuously outlined their very just concerns that services at Regina House have been consciously run down.

“We have also met with the management committee of Regina House and asked them to prioritise the well-being of the women by continuing to provide the required services to support them.

“Urgency must now be placed into exploring all options and finding a resolution".

Meanwhile, People Before Profit Councillor Fiona Ferguson has called for an emergency meeting to discuss the proposed closure.

"As leaders from the Executive, including Michelle O'Neill and Paul Givan, stood on the steps of Stormont launching domestic abuse strategies, workers were forced to occupy a women's hostel which provides a vital refuge in this city," she said.

"Words and strategies from the Executive are pointless without funding and services on the ground."

A Department for Communities spokesperson said: “The Supporting People Programme, which is administered by The Housing Executive, grant funds Regina Coeli House to provide housing support to homeless women.  Following the decision of Regina Coeli to close the facility, citing the premises required significant repairs and maintenance, the Housing Executive’s priority is to ensure new accommodation is secured for the residents of Regina Coeli House which is based on their circumstances and support needs.

“The Department has asked the Housing Executive to continue to treat this issue with urgency.

“At the time of responding, the Department has not received a request from the Unite Regional Secretary about the closure of Regina Coeli House, but will continue to engage with all relevant stakeholders on this matter.”